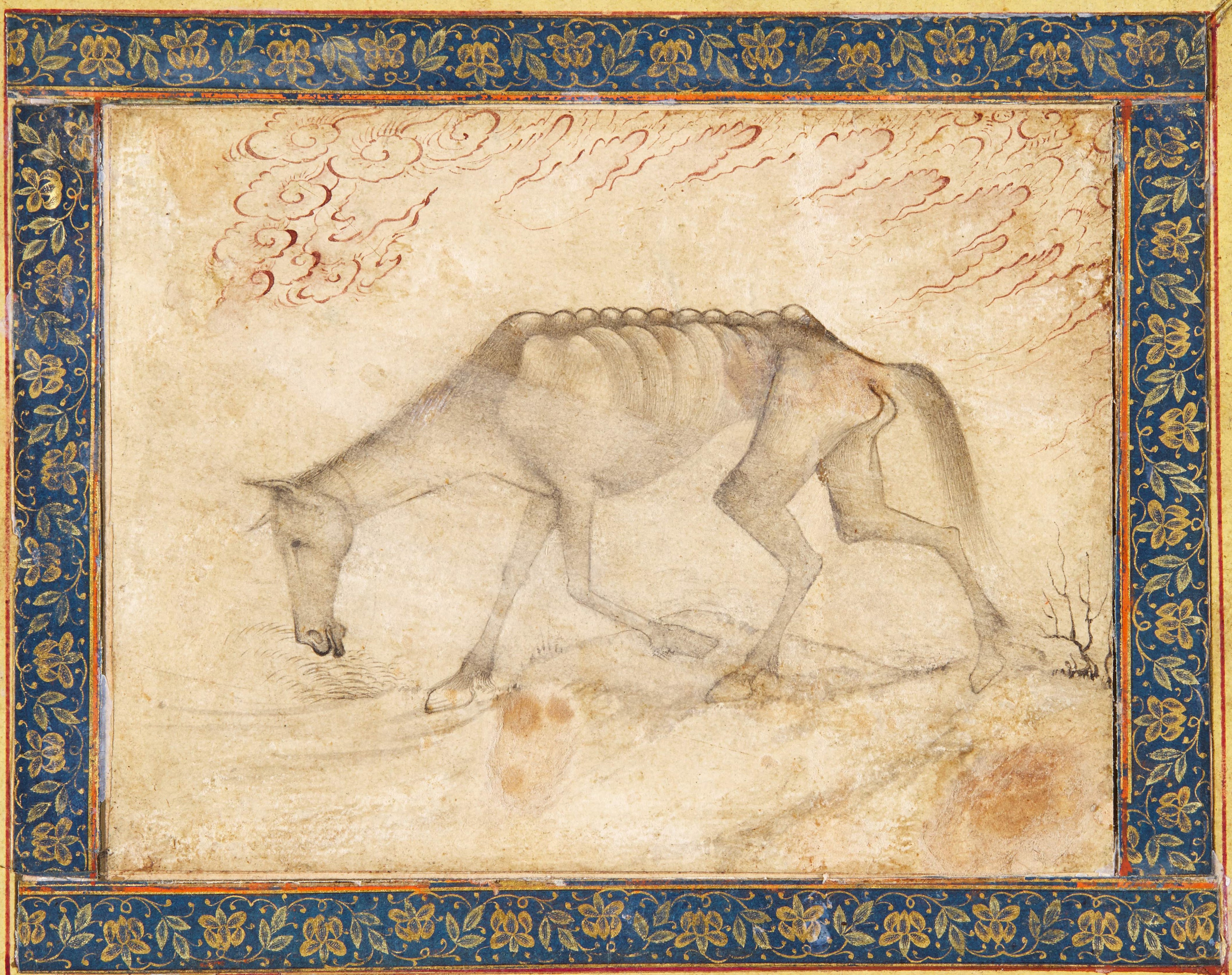 In fair condition, minor areas of staining and rubbing to ink drawing, laid down on later card mount, as viewed

Emaciated animals, especially horses, were often depicted in Indian painting, and were derived from a Persian prototype. The Mughal artist Basavan produced a drawing of a starving horse and an equally emaciated man and his dog, now in the Indian Museum, Calcutta (see A. Welch 1976, no.8), while a starving ram attributed to the artist Sharif from around 1590 is in the Khalili Collection, London (see Leach 1998, no.8). Earlier Persian examples include a drawing by Reza-i Abbasi in the Museum für Islamische Kunst, Berlin (see Canby 1996, cat 18). F.R. Martin believed that the images were derived from European prints (Martin 1912, p.93). Annemarie Schimmel believed them to symbolise the baser instincts within man whereby the mystic must starve to attain enlightenment (Schimmel 1975, pp.112-3). Anthony Welch noted that "the ancient, overworked nag was one of the most potent symbols in Iranian mystical poetry of human existence weighed down and broken under the weight of its own mortality" (A. Welch 1976, p.145). In Islamic literature, perhaps the best-known image of an emaciated ascetic is that of Majnun from the tale of Layla and Majnun, a popular love story from ancient days that had been taken up by Nizami and other Persian-language poets such as Amir Khusrau Dihlavi, one of the most important medieval poets of India.

Although the ruling dynasty of Bijapur in the seventeenth century was Muslim and so naturally influenced by Persian iconography, they were also products of their Deccani environment and were profoundly influenced by their Indian and Hindu surroundings. This was particularly so during the reign of Sultan Ibrahim Adil Shah II (1579-1627), who was an enthusiastic mystic with a strong interest in both Muslim and Hindu teachings. Thus the patrons and artists of Bijapur in the seventeenth century would have been aware of both the Islamic mystical themes of the starving ascetic and horse, and the Hindu imagery of deities such as Chamunda, the Horrific Destroyer of Evil, who is depicted in skeletal form. Also the introduction from the sixteenth century onwards of engravings brought to India by Europeans would have exposed the artists to images such as that of a skeletal figure of death on a horse.