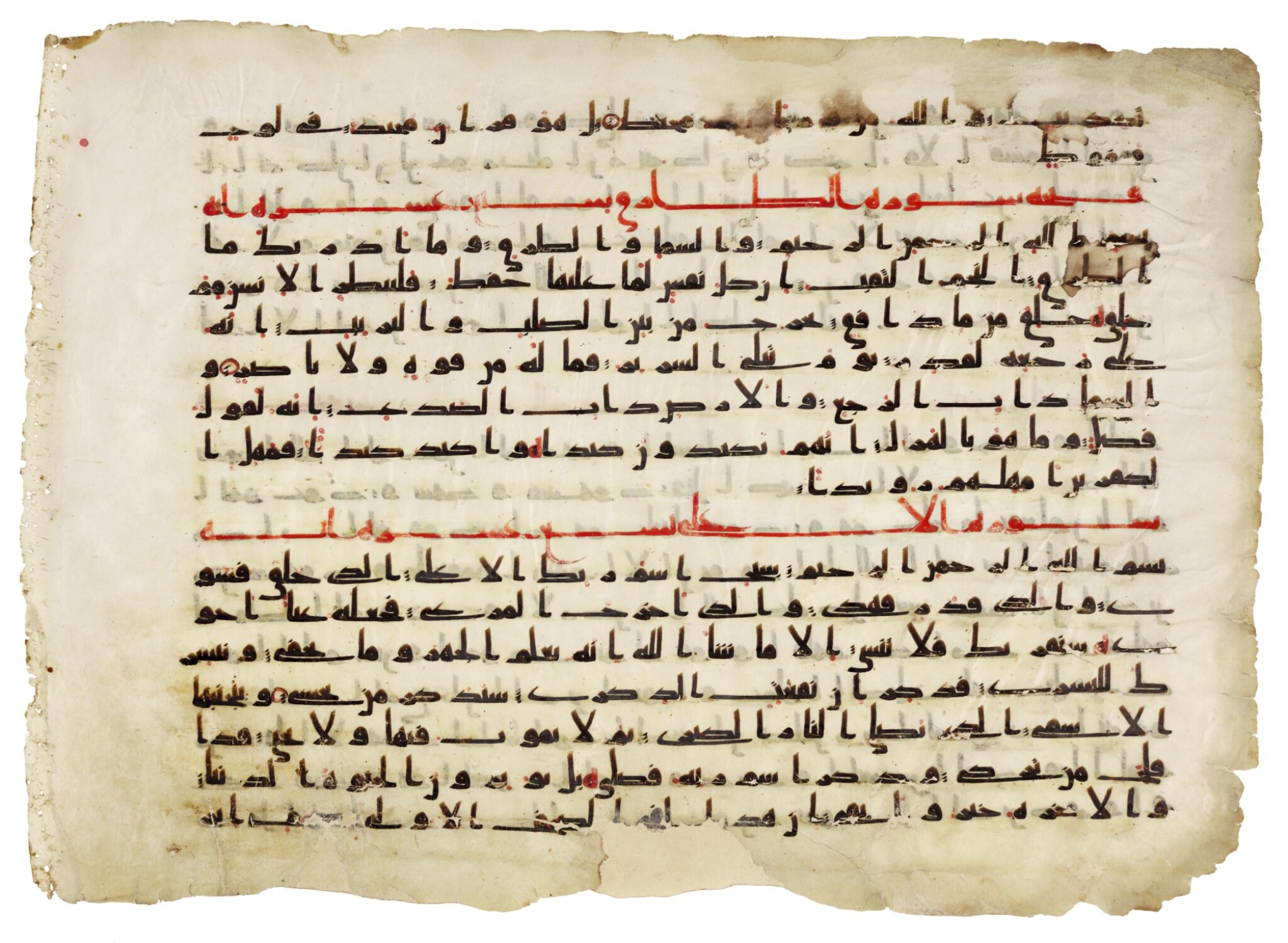 Arabic manuscript on vellum, 18 lines to the page, written in elongated Kufic script in black ink, verses separated by clusters of diagonal dashes, khamsa markers in the shape of a red ha', 'ashr marked by a red circle, surah headings in red

Some minor restoration to the lower edge and just into the bottom line of text in small areas. Small spots of restoration in the upper half of the folio. One edge with a series of small holes, probably from previous binding. Minor staining. Recto with slight fading, typical of kufic Qur'ans, as viewed.

This impressive folio comes from one of the largest Kufic Qur’ans of the eighth century. Both in scale and style, this folio shares many features with its early counterparts, and to the best of our knowledge, only the so-called 'Tashkent Qur'an' (55 by 70cm) surpasses the scale of this leaf (see, for example, the MET, New York, acc. no.2004.87).

A single leaf of this impressive manuscript would have required an entire animal skin which only the wealthiest of patrons would have been able to afford. The generous scale suggests that a patron of great importance with little concern for the expense involved in creating such a commission. The space it would occupy would indicate that it was intended for display in a mosque (Evans and Ratliff 2012, p.272, no.190).

The simplistic ornamentation that gives focus to the text is typical of the earliest period of Kufic Qur'ans in the eighth century. The verse divisions of this manuscript are marked by clusters of diagonal lines which feature on the earliest Qur’ans including the ‘Tashkent’ Qur’an, attributed to the early eighth century (ibid, p.272, no.190).

Similarly, the calligraphy of this manuscript corresponds to Déroche's 'group B.1b' in his categorisation of early Arabic scripts used for copying the Qur'an, an early derivative of the Hijazi script with similar style used in architectural inscriptions in the second half of the seventh century (see F. Déroche, The Abbasid Tradition, London, 1992, pp.34-47). A large Qur’an section in vertical format in the Institute of Oriental Studies, St. Petersburg attributed to the last quarter of the eighth century (inv. no.E20, 50 by 32cm), displays a comparable script to this leaf (Déroche 1999, p.70).

Only a handful of manuscripts have survived that parallel the size of this leaf. These include the Sana’a Qur’an (51 by 47cm) and leaves from a manuscript measuring approximately 40 by 54cm, sold in these rooms, 14 April 2010, lot 3; 6 April 2011, lot 166; 1 April 2009, lot 3 and 8 October 2008, lot 7. Although the pages share the same number of text lines as the present leaves, the text is more cramped with a less generous stretching of the individual letter forms (mashq).