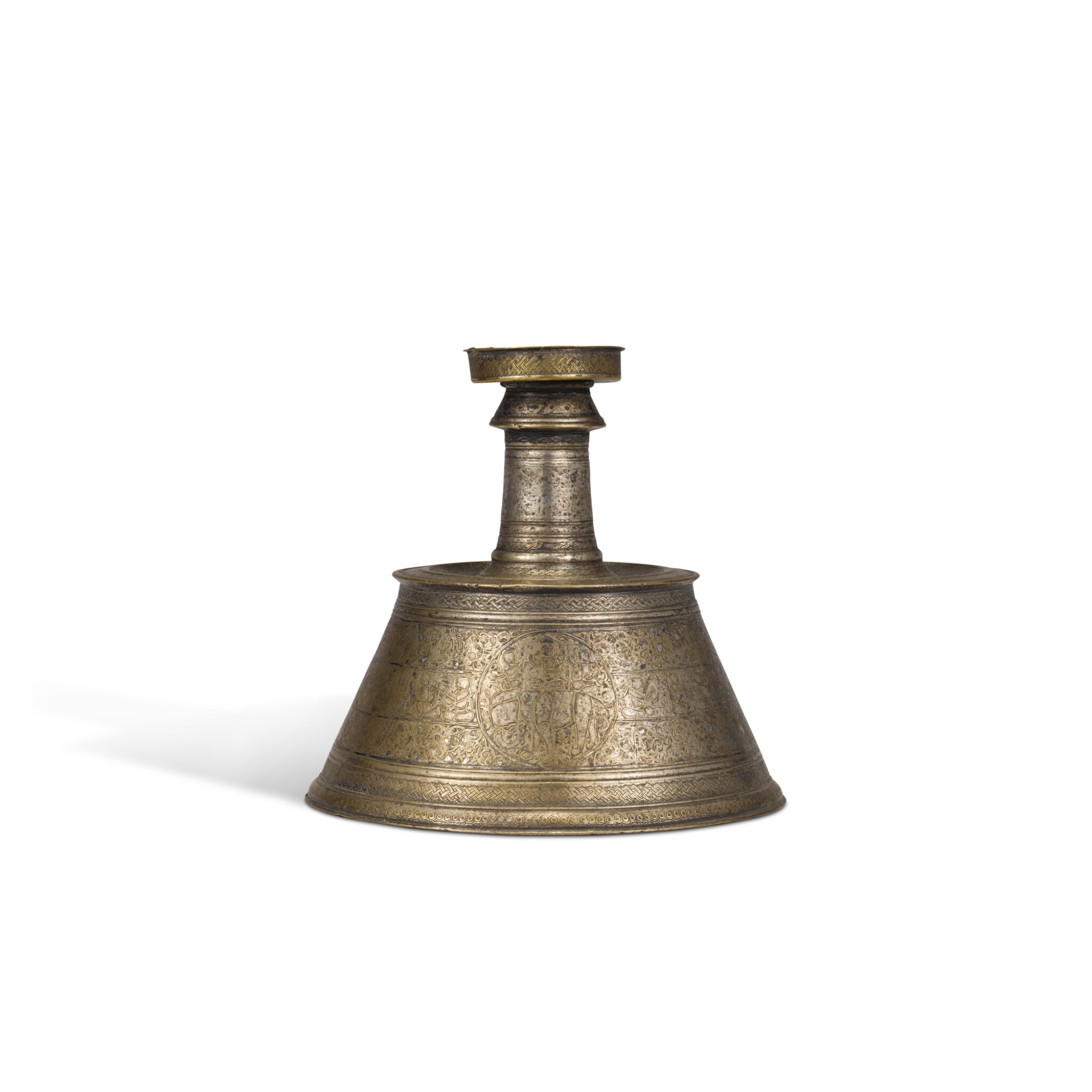 the base of truncated conical form, the projecting shoulder leading to a concave driptray, the narrow tapering cylindrical neck surmounted with ridged conical socket, the body decorated with a figural frieze of musicians and three roundels with horse riders and a figure riding an elephant, the driptray and neck with bands of calligraphy, vestiges of silver-inlay

Most of the silver-inlay is now lacking but traces remain some of which is tarnished and would improve with cleaning. Rubbing to the decoration overall and areas of oxidisation, consistent with age. With small dents, nicks and surface scratches, mainly to the protruding ridges. The small tray later added above the socket. The interior with oxidisation, as viewed.

On the shoulders and neck:

This candlestick belongs to a group of Mamluk cast brass examples produced in Cairo within the first century of Mamluk rule. One of their distinctive features is a domical openwork bracket inside the base, also visible on our candlestick (T. Falk 1985, p.277, no.286). In a discussion of these candlesticks, Rachel Ward establishes their provenance based on the inscription of an example in the Cairo Museum of Islamic Art (inv. no.1657, published in E. Atil, 1981, pp.57-58), attributing it to a Cairene workshop, in 1269 AD (J. Allan, Oxford, 1995, pp.147-158). The present candlestick is closely related to a piece in the Nuhad Es-Said Collection (see J. Allan 1982, pp.80-83, no.13), which was also ascribed to a Cairene workshop circa 1270. This makes these objects some of the earliest known pieces of Mamluk metalwork from Cairo.

Their design inherited from the figural tradition of earlier thirteenth century Ayyubid metalworks. Similar roundels with a cheetah sitting behind a mounted rider can be found on the Nuhad Es-Said candlestick, and on a thirteenth-century example from Syria (published in E. Baer 1983, p.233), while a roundel showing three figures riding an elephant is on a basin in the Victoria & Albert Museum, dated 1250-1350 (inv. no.2734-1856). Its catalogue entry states that figural scenes on Mamluk metalwork were common until 1300, after which they were replaced by benedictory inscriptions. This can be witnessed on a Cairene candlestick clearly related to our group but attributed to the early fourteenth century (published in T. Falk 1985, p.277, no.286).

This candlestick’s decoration is also characteristic of a style attributed to the ‘Mosul School’. In the Cairo Museum of Islamic Art, the aforementioned candlestick (inv. no.1657) and another comparable piece with a band of musicians, dated 1269-70 (see J. Bloom & S. Blair 1995, pp.97-98, no.126) both bear an 'Al-Mawsili' (from Mosul) nisba. Based on the conjecture attaching all Mawsili artists to the same Cairene studio, these candlesticks thus provide a rare opportunity to study the stylistic and technical development of a single workshop between about 1269 and 1330, while documenting the transitional period of early Mamluk metalwork.

For other published examples, see the appendix in R. Ward, 'Tradition and Innovation, Candlesticks made in Mamluk Cairo'. One was sold in these rooms, 20 April 1983, lot 302.