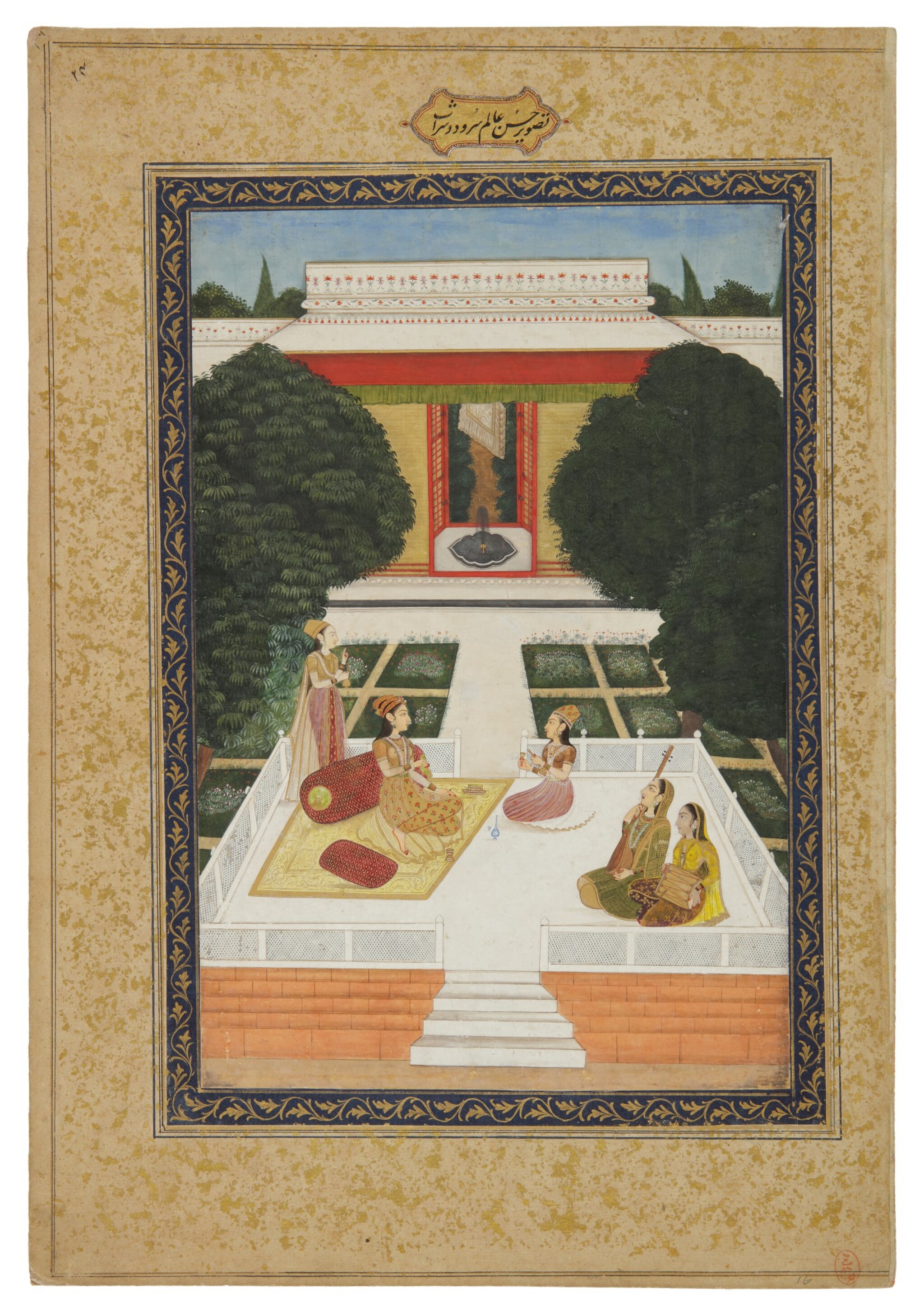 In good condition, tiny worm hole to outer margin, minor loss to white railings, very minor surface specks of loss and staining, on reverse smudging to calligraphy and areas of loss, as viewed.

A lady of lovely appearance and adorned in finery sits leaning against a bolster listening to female musicians on an outdoor marble terrace, attended by a handmaiden holding a golden flask. Symmetrical, colourful flower beds and shady trees form a geometric surround with a pavilion and a silver fountain beyond. Clarity of composition, a certain brightness, and crispness of form enhance our view of this leisurely daytime scene. Minute details abound, such as the subtle yet exacting treatment of the bottom edge of the seated attendant’s fluttering, diaphanous dress, and in the precise rendering of the ordered flowering garden beds.

This double-sided folio is from an interesting album possibly assembled by the Mughal nobleman Najm al-Din 'Ali Khan or by Nawab Shuja' al-Daula of Awadh (see Sotheby's London, 14 December 1987, lots 25-40; Leach 1995, vol.II, pp.654-6). Some folios were acquired by Sir Elijah Impey, the first Chief Justice of Bengal from 1774-83, and husband of Lady Impey, patron of the album of famous natural history illustrations (see Leach 1995, vol.II, pp.654-6). The wide album borders flecked with gold feature distinctive gold cartouches with inscriptions identifying the subjects. The Persian hand of these inscriptions seems to be the same throughout the group and the inscriptions always begin 'tasvir-e...'. Amongst the various subjects depicted (mullahs, princes, hunting scenes, maidens), several feature idealised images of young women in various settings identified as 'tasvir-e hosn...' ('image of a beauty...') (Leach 1995, vol.II, pp.654-6). A number of the album folios bear the seal impression of Sir Elijah Impey, himself a keen collector of manuscripts and miniatures, leading to the suggestion that part of the album was acquired by him while in Bengal in the 1770s and '80s. Impey's album was auctioned after his death at the sale of his library held by Philips of 73 New Bond Street, London, on 21 May, 1810, but it is probable that other folios from the same original group remained outside Impey's collection, as a number were acquired in India in the late nineteenth century by Admiral Edmund Fremantle (1836-1939), who was stationed in India in the 1880s. Folios with this provenance are in the Victoria and Albert Museum (IS-156-1952) and the Chester Beatty Library (Leach 1995, vol.II, pp.654-664, nos.6.232-6.241; see also S. Markel and T.B. Gude et al, India's Fabled City: The Art of Courtly Lucknow, Los Angeles, 2010, p.79, no.10), while others from the wider group are in the Bodleian Library, Oxford (Douce Or. A3) and the Museum of Canberra. Another group of sixteen folios with the same borders was formerly in the collection of Hon. Stephen Tennant, reputedly acquired by him on the advice of his friend E. M. Forster (see Sotheby's London, 14 December 1987, lots 25-40). Further paintings from the same original group were in the Pozzi collection, while others have appeared at auction in these rooms 1 June 1987, lot 16, at Christie's London, 25 April 2013, lot 175, and Hotel Drouot, Paris, 16 December 1988, lots 19-20.

The couplet on the verso is from a ghazal of Hafiz and was copied by Muhammad Husayn Kashmiri (active 1580-1609), one of the most notable Indian calligraphers of his time and active during the reign of Emperor Akbar from whom he received the title Zarin Qalam. During the reign of Emperor Jahangir he was chief court calligrapher and signed his work "Jahangir Shahi", ref. M. Bayani, 'Ahval va athar-e khosh-navisan, nasta’liq navisan', vol.3, Tehran (1969-70), pp.702-4. In the present folio he signs himself as “Muhammad Husayn Zarin Qalam Akbar Shahi” ('Muhammad Husayn the Golden Pen in the service of Emperor Akbar') which indicates a date for the calligraphic side of the folio as prior to 1605.