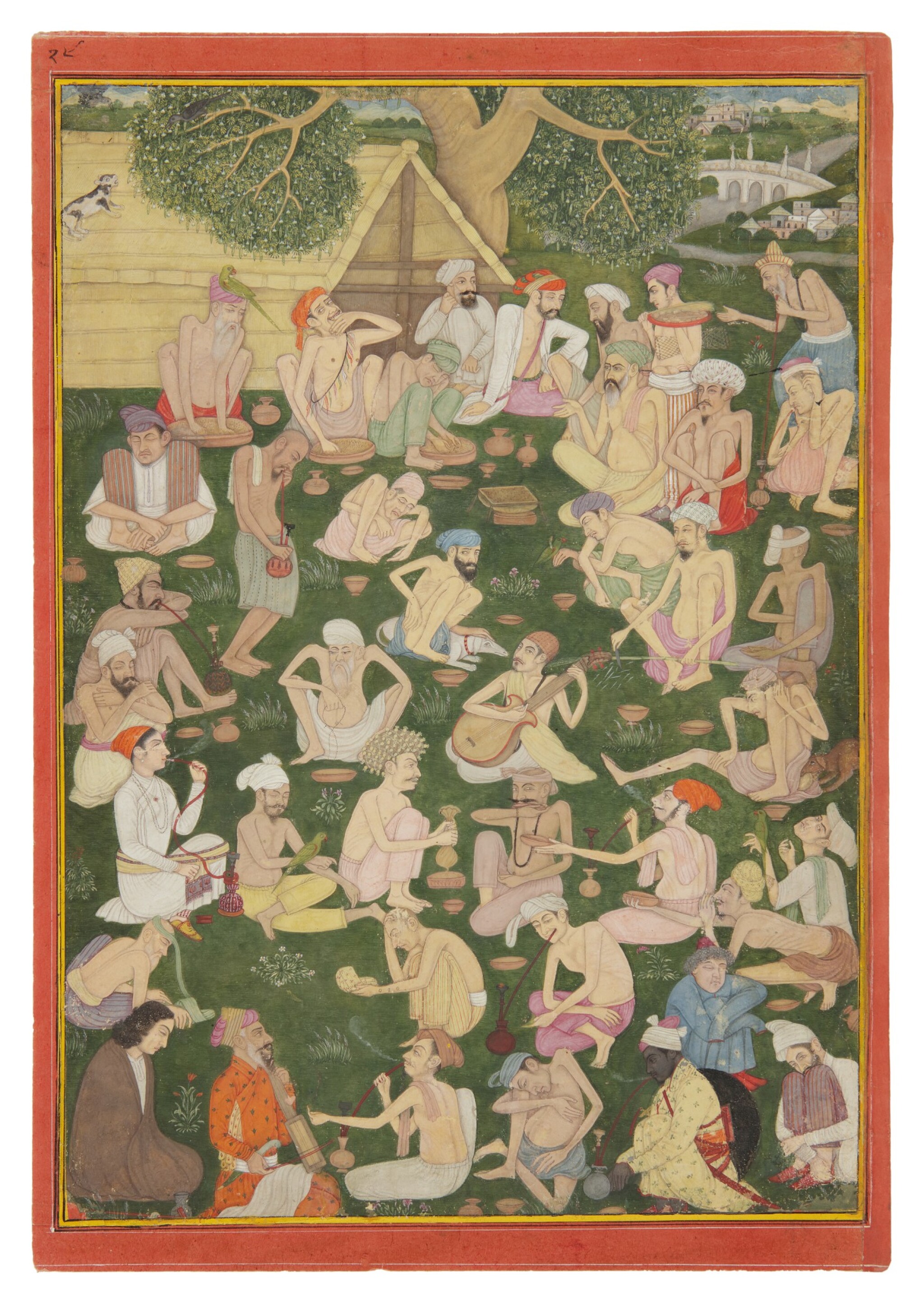 In good overall condition, minor areas of loss and rubbing to pigment, creasing in corners, specks of foxing on reverse, small area of loss to parrot and above dog's head with associated repair only visible on reverse, as viewed

Sufis are followers of the mystical strain of Islam. In this impressive painting, forty figures, mostly all Sufis, are depicted, portrait-like, showing differing physical types and psychological attitudes, while in varying degrees of inebriation from the potent effects of bhaang, a preparation of the cannabis plant. The artist deftly and often humorously captures their drug-induced behaviour and various states of consciousness while preparing and consuming the drug: blissful, meditative, expressive and semi-conscious. The gathering includes a solemn European, dressed in a brown cloak, as well as a nobleman.

Marvellous details abound in this painting, set against a dark green ground. Parrots perch on heads and arms, dogs, so often the loyal companions of wandering ascetics, lounge and snatch food as a curious cat or dog climbs on the roof of an adjoining hut. An unusual looking European figure is kneeling in the lower left corner. Behind this colourful, exuberant gathering, a large tree blossoms with a multitude of verdant leaves and precise, small lavender blooms. A bridge crossing a river with clusters of structures at its banks is seen in the distance.

The subject of a gathering of ascetics in the wilderness was a popular one in Indian painting, with origins in early sixteenth century Persian Safavid illustrations followed by later sixteenth century Mughal examples. For an early seventeenth century painting of ascetics in a landscape attributed to Govardhan see Stuart Cary Welch, A Flower from Every Meadow, New York, 1973, pp.104-5, no.63. The satirical edge and the caricature of ascetics inebriated under the effects of mind-altering substances begins to appear in Indian paintings in the seventeenth century. For an early seventeenth century drawing from Iran or the Deccan, depicting a band of similarly intoxicated dervishes in a relatable group configuration, see the Museum of Fine Arts, Boston, accession no.14.649. For an eighteenth century example see Linda York Leach, Indian Miniature Paintings and Drawings: The Cleveland Museum Of Art, Cleveland, 1986, p.132, no.42. For another painting depicting this subject see Daniel Ehnbom, Indian Miniatures: The Ehrenfeld Collection, New York, 1985, pp.92-93, no.39.

Stuart Cary Welch had verbally ascribed this painting (and others related) to an as-yet-unknown artist working in the Deccani city of Burhanpur. This attribution to the locale of Burhanpur seems very plausible given that it was an important centre in the northern Deccan, alongside Aurangabad, as a seat of Mughal activity and governance during the Mughal military campaigns of the seventeenth century. The style of our present painting reveals the crosscurrents of Mughal naturalism and Deccani exuberance.