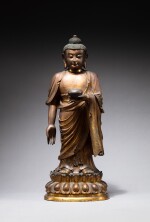 A gilt-bronze figure of Amitabha Buddha

Traces of blue pigment to the hair and red pigment at the bottom of the robe. Some overall small casting flaws notably to the head and around the lotus base, as well as scattered patched areas, notably to the torso, the largest 2.5 x 1.7 cm, as visible in the catalogue photos. General surface wear and rubbing to the gilding.

Acquired by the parents of the present owner during the 1980s and thence by family descent.

The Buddha of Infinite Light with his left hand raised and holding the patra alms bowl, the right hand lowered in the wish-granting gesture, varada mudra. The Buddha is clothed in monk’s attire with an undergarment tied at the waist and long flowing robe with finely incised floral borders and standing upright in samapada on a waisted oval lotus pedestal. The ancient symbol of svastika is engraved on the chest as an auspicious Buddhist emblem. The long right arm reaching to the knee represents one of the thirty-two lakshana, the auspicious physical signs that distinguish the Buddha. The long arm and open-handed gesture may also be interpreted as reaching out to souls destined for Amitabha’s Western Paradise, see W. Zwalf, ed., Buddhism:Art and Faith, London, 1985, p. 209, cat. 302. The standing Amitabha Buddha with right hand in varada mudra is associated with Pure Land Buddhism, and the iconographic representation in China remains virtually unchanged from at least the fifteenth century, cf. an Amitabha in the British Museum dated 3rd year of Chenghua, 1467, ibid. The engraved borders of the robe and the style of the face are typical of Kangxi sculpture, cf. the peaked hair line, large forehead, and relatively thin lips on an imperial gilt bronze Avalokiteshvara, see The Complete Collection of Treasures of the Palace Museum: Buddhist Statues of Tibet, Hong Kong 2003, p. 237, cat. 226, and the floral design on the robe of an inscribed Kangxi gilt bronze Dipankara Buddha dated 1662, see Leidy and Strahan, Wisdom Embodied: Chinese Buddhist and Daoist Sculpture in The Metropolitan Museum of Art, New York, New Haven and London, 2010, p. 23, fig. 27