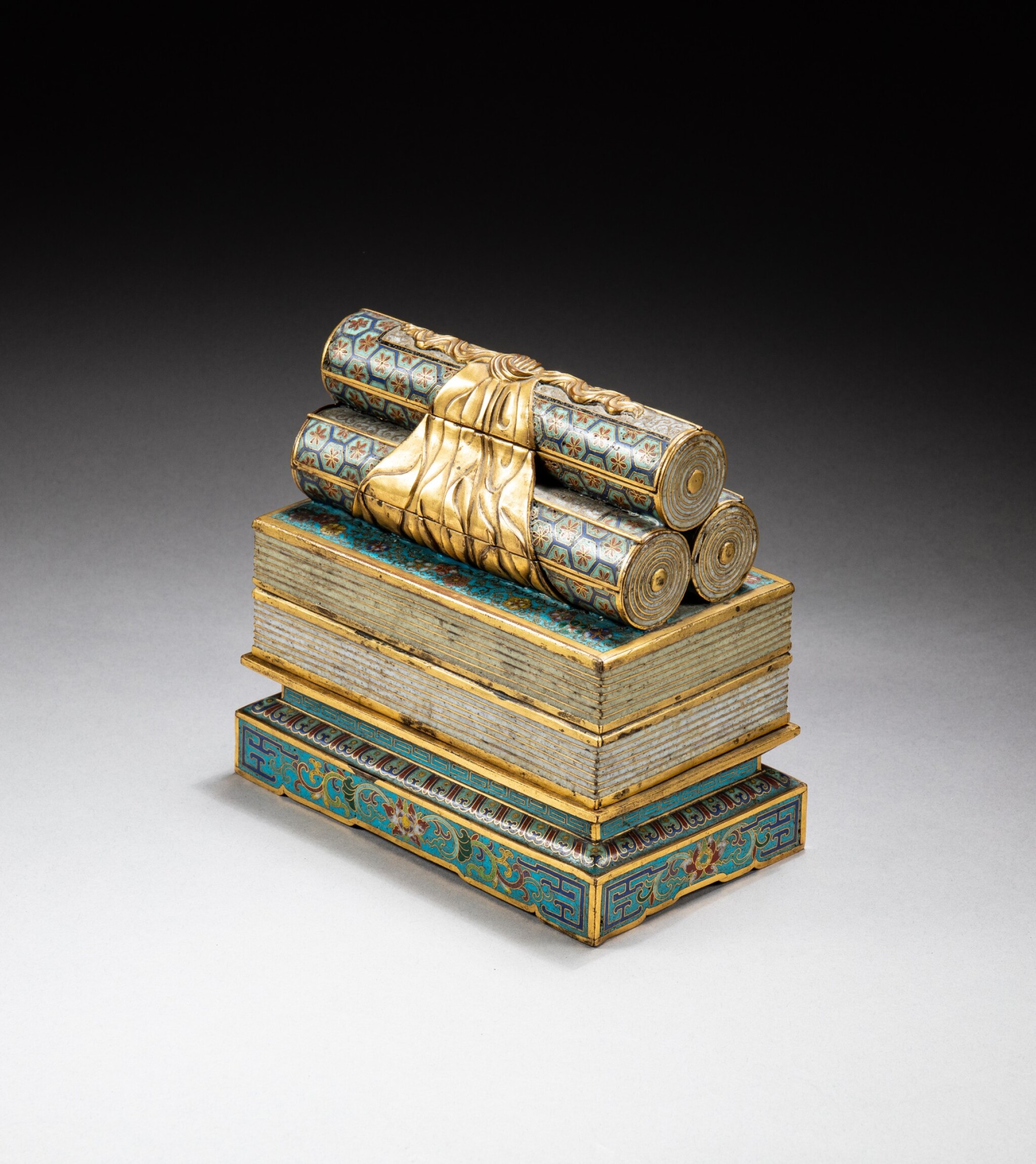 finely worked in the form of three stacked hand scrolls wrapped in cloth placed on an album box, all raised on a staged pedestal, decorated with lotus reserved on a turquoise ground

Overall rubbing, wear and scattered minor dents to the gilded decoration. Some small areas with losses of enamels, notably to the extremities of the rolls, otherwise overall good condition.

Scroll boxes in the form of either three or five stacked scrolls were made in a variety of materials and demonstrate the importance given to packaging during the Qianlong reign. These were usually placed on a matching album box as visible here. Compare for example a carved cinnabar lacquer scroll box with matching album box in the Palace Museum Beijing containing paintings by Yang Dazhang, as well as a zitan and ivory scroll box also in the Palace Museum Beijing, both exhibited in the Macau Museum of Art and illustrated in Qing Legacies ¡V The Sumptuous Art of Imperial Packaging, The Macau Museum of Art, Macau, 2000, cat.no. 2 and 3. The scroll boxes sometimes fitted in larger treasure boxes, not only containing paintings, but all sorts of curios such as archaic jades, miniature porcelains, cloisonne or wood carvings.

The illusion of an object wrapped in cloth was frequently evoked in Japanese lacquer, of which Qianlong's father, the Yongzheng Emperor, appears to have been particularly fond. Among the many Japanese lacquer objects of his collection were several pieces modelled in relief with the folds of gathered or knotted cloths, sometimes tied with a cord, or even shaped in form of pouches tied with ribbons (Qing gong shi hui. Yuan cang Riben qiqi tezhan/Japanese Lacquerware from the Ch’ing Imperial Collection, National Palace Museum, Taipei, 2002, cat. nos 01, 50, 51, 61 and 64). The imperial workshops continued to be engaged during the Qianlong reign in recreating this trompe-l’oeil wrapping effect in various media, including in cloisonné enamels, but also in lacquer and sandalwood (Qingdai gongting baozhuang yishu/The Imperial Packing Art of the Qing Dynasty, Palace Museum, Beijing, 1999, cat. nos 64 and 65).