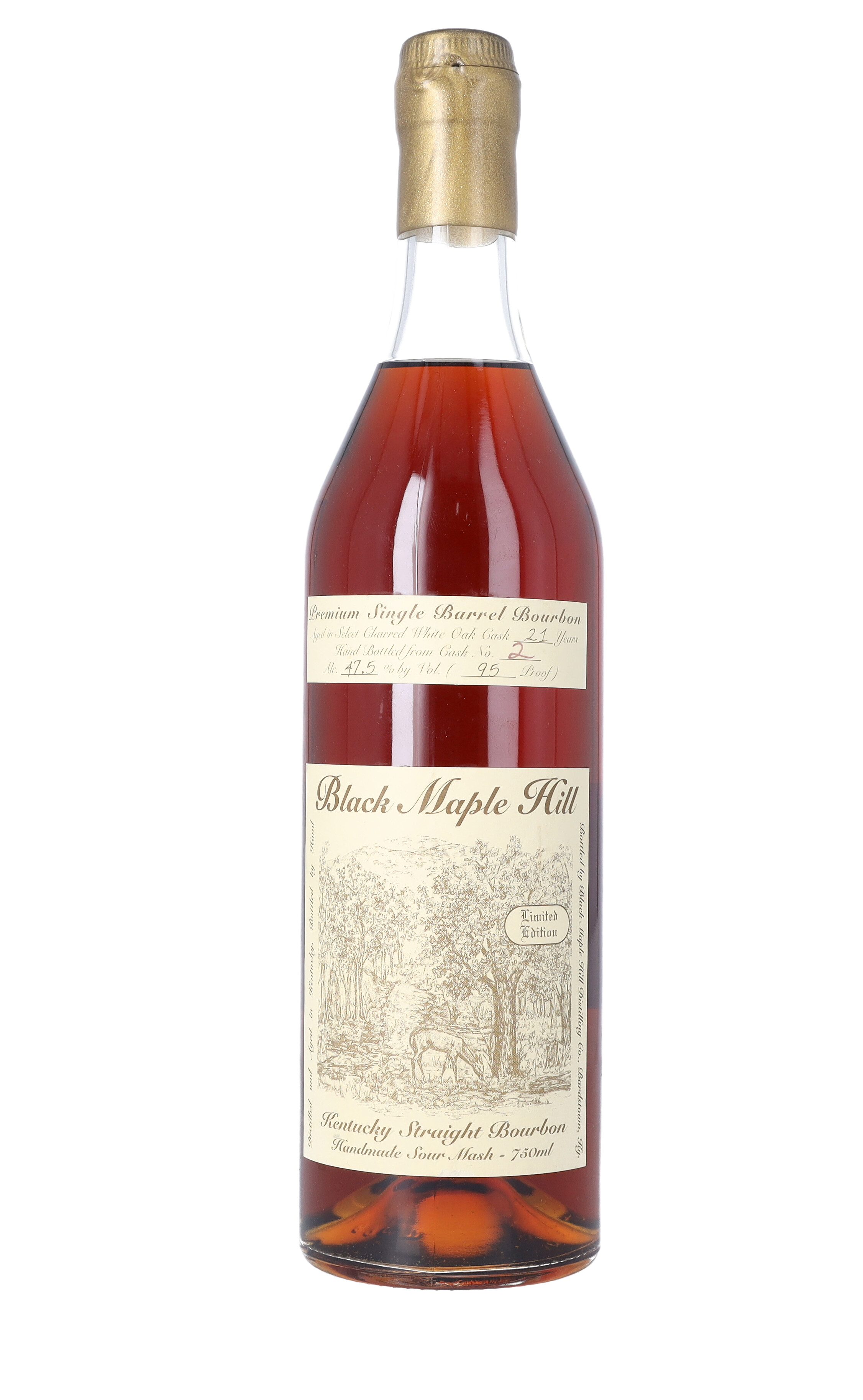 ﻿Black Maple Hill is among the most coveted American whiskeys, with a history that connects it with some of the biggest names in Kentucky distilling. Like several other extremely limited-release brands from the early 2000s, Black Maple Hill did not make its own whiskey, or even bottle it. Rather, its owner, a California-based company called CVI Brands, hired Julian Van Winkle III to find high-quality barrels of whiskey and bottle it for them. At the time, Van Winkle was working out of the disused Hoffman Distillery in Lawrenceburg, Kentucky, where he bottled whiskey for his own brand, Old Rip Van Winkle, as well as for clients like CVI, all of which have long since achieved legend status among collectors.

It is assumed that much of those early Black Maple Hill releases drew from Van Winkle’s barrels that he inherited from Stitzel-Weller, which his grandfather had helped found but which his father had been forced to sell. The rye whiskey he bottled for CVI, at 23 years old (LOTS #225-#227) came from a legendary batch made at the Bernheim distillery, the same whiskey that went into near-mythical bottlings like LeNell’s Red Hook Rye. Both the bourbon and the rye were released in minuscule amounts. Most of the releases were very old, some over twenty years old, and released in minuscule batches. By many accounts it was some of the best bourbon whiskey ever sold, ranking with early releases of Old Rip Van Winkle, Olde St. Nick and others legends.

The relationship with Van Winkle lasted just a few years. With interest in bourbon picking up – and especially interest in his whiskeys – Van Winkle was running out of stock, and in 2002 he signed a deal with Sazerac to produce his Van Winkle line of whiskey at the company’s Buffalo Trace distillery. That deal required him to cancel his sourcing and bottling contracts, including with CVI Brands.

At the time, KBD/Willett did not yet have its own working distillery. W; what it did have, though, was a vast library of extraordinary barrels from distilleries across Kentucky, which the Kulsveens had bought for bargain-basement prices during the lowest points of the bourbon bust in the 1980s and 1990s. Reportedly, most of the whiskey that the Kulsveens bottled for Black Maple Hill came from Heaven Hill, but it is also possible that some of it came from the Barton Distillery and from  Bernheim., in particular a series of rye releases, examples of which are included in this collection.

The change in sourcing and bottling did not hurt Black Maple Hill – if anything, the association with Kentucky Bourbon Distillers, at the time a quiet, some might say reclusive operation, only added to its cachet. So did its packaging: It came in a wine bottle with a simple, vaguely retro label, setting it apart from the rest of the market. And, of course, the whiskey itself was still amazing, even though the ages came down a bit under the new arrangement.

Eventually the Kulsveens faced the same problem Van Winkle had. Demand for their own label, Willett Family Estate, was climbing, even as they made plans to open their own distillery. With access to older stocks dwindling, Black Maple Hill moved first to a no-age-statement label, then finally ceased altogether. It returned in 2014, this time in a new bottle shape and with whiskey made on contract at the Stein distillery in Oregon. While the name and the labels are the same, the whiskey inside is completely different, not even reminiscent of the brand’s glory days – if nothing else, they highlight just how magical those earlier bottles truly are.

﻿Please note that all spirits are sold for collection in New York or shipment to the District of Columbia, New Hampshire and New York via specialized carriers. For delivery outside of the United States, please see Important Information for Purchases at Wine and Spirit Sales in the Conditions of Business.