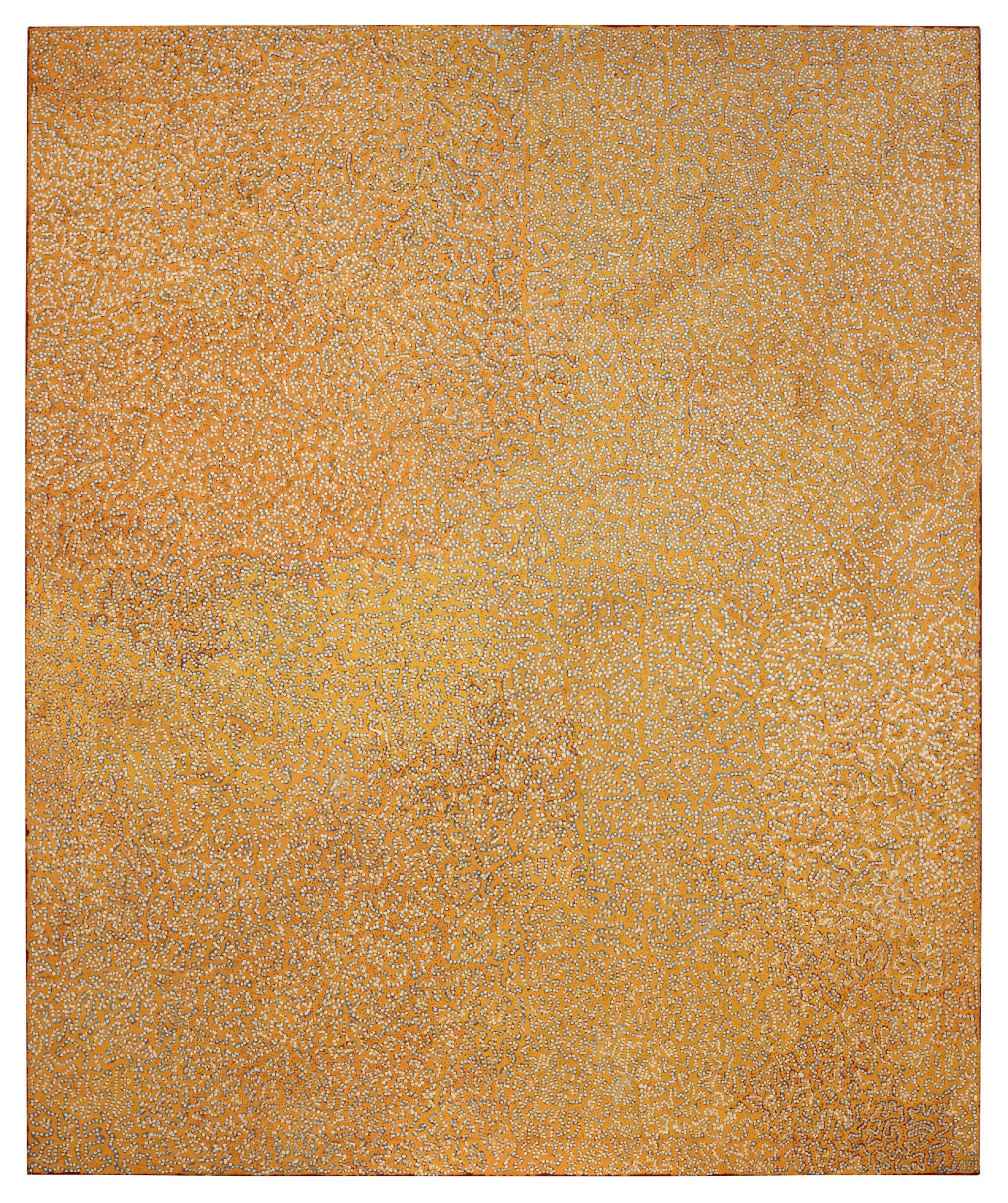 The painting is unframed and appears in excellent condition overall with no repairs or restoration. Minor scuffing at the corners. There is a small smudged area of paint approximately 3 cm long, about 25 cm diagonally right from the central part of the painting [this looks to have happened during the paintings creation].

This painting is accompanied by its Pupanya Tula Artists Certificate of Authenticity.

Joseph Jurra Tjapaltjarri was born in the desert interior of Western Australia in 1952. At the time his family lived in country west of where the Kiwirrkurra community now stands, with only intermittent contact with the increasing number of kartiya (non-Indigenous people) who were beginning to circulate in the region.

Over a decade later, Jurra and his extended family group encountered a Northern Territory Welfare Branch patrol and were brought into the Government settlement of Papunya, 250 miles east. Here, in the company of relatives they’d not seen for many years, they were required to adapt to the sedentary lifestyle of community life.

In 1971, Jurra witnessed several of the settlements Aboriginal men painting their ancestral stories onto scraps of composition board to be sold in the nearby township of Alice Springs.

This was the beginning of the of the Western Desert Art movement, a moment in time now etched into Australian art history. However it wasn’t until the early 1980’s that Jurra was called upon to assist one of his classificatory fathers, Charlie Tjaruru Tjungurrayi with his paintings. A few years later when Jurra began painting as a solo artist he created formal geometric compositions of dotted lines, concentric circles and squares. Within two years he presented his first solo exhibition at the revered Gallery Gabrielle Pizzi in Melbourne, the same year he exhibited in a group show at the John Weber Gallery, New York.

Over time his began to use heavily dotted sinuous lines to illustrate various desert flora¬. Yunala, 2006 represents the root system of yunala (Bush banana or silky pear vine, Marsdenia australis). Yunala is also the name of a rockhole site where a group of ancestral women gathered to collect this yunala prior to continuing their journey north-east to Wilkinkarra (Lake MacKay). Jurra lived at the remote settlement of Kiwirrkurra in Western Australia where he was recognized as an affable gentleman, equal parts boyish joker and solemn recluse.

Luke Scholes is former curator of Aboriginal art at the Museum and Art Gallery of the Northern Territory. He has curated multiple award-winning exhibitions and written extensively about Aboriginal art.