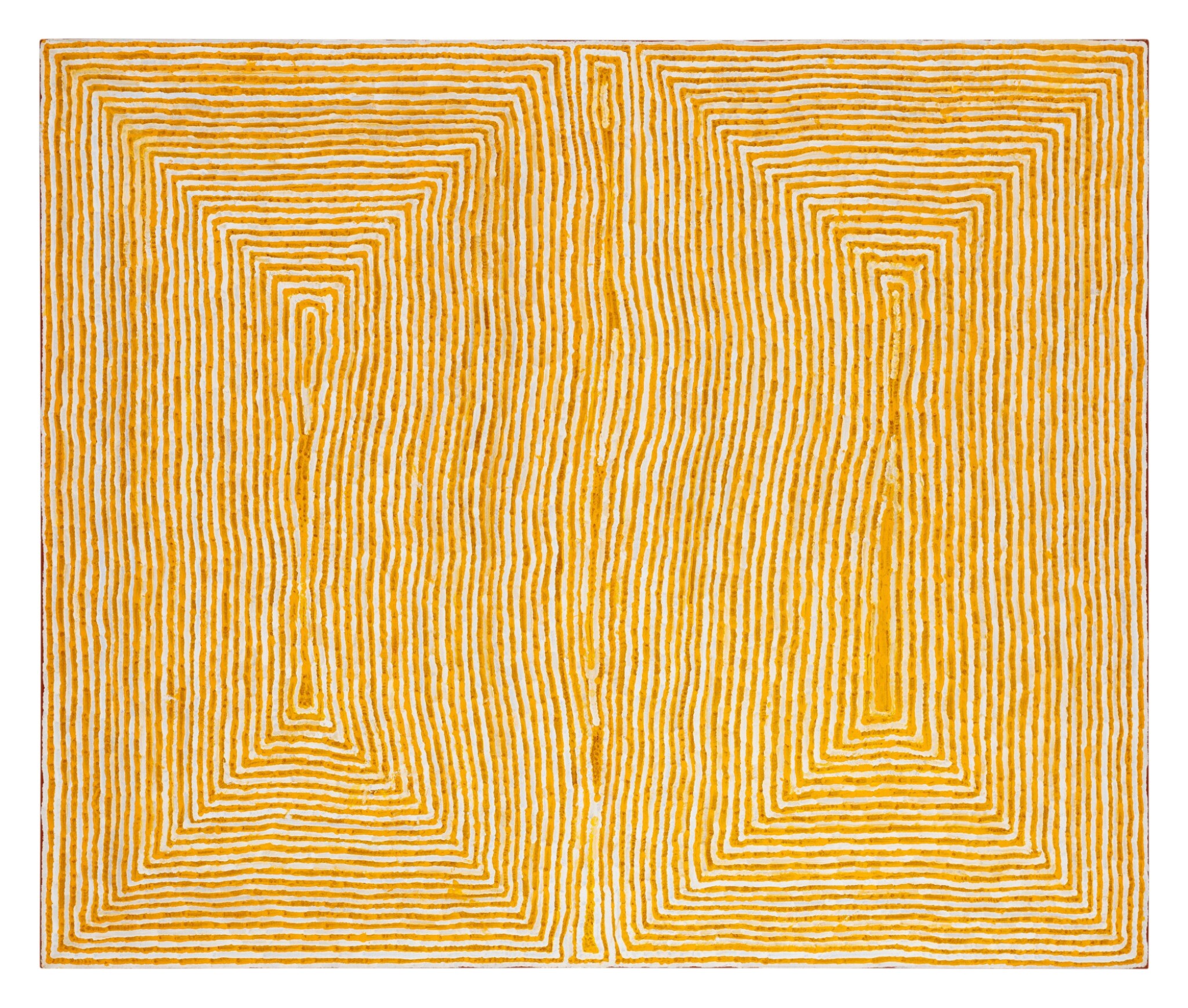 The painting is housed in a contemporary lime-washed timber box frame. The painting appears to have no repairs or restoration and is in excellent condition overall.

This painting is sold with its accompanying Warlayirti Artists documentation with descriptive notes that read:

"This painting tells part of the Wati Kutjarra story, a prominent Tjukurrpa (Dreaming) in the Tanami and Great Sandy Deserts. The Wati Kutjarra were two ancestral brothers who travelled large areas of the desert country teaching people about food, fire and hunting, they also created many of the landforms now found here. This painting's story takes place around Wilkinkarra (Lake MacKay), a vast salt lake located far to the south of Balgo. The two brothers travelled to the country of Wilkinkarra before the lake was formed, it was here they lit a large fire which burnt through all this country and created the lake. The two horizontal lines show where the Wati Kutjarra made camp and slept. The central section represents the windbreak they constructed to protect themselves from the wind and the many parallel lines are the tali (sandhills)."

Tjumpo Tjapanangka was one of the doyens of the art movement at the community of Balgo in the Tanami Desert, on the southern perimeter of the eastern Kimberley. He played a fundamental role in the emergence of Balgo artists into the public domain, commencing in the 1980s. Tjapanangka was a gifted painter, an elder of the Kukatja people, a ceremonial leader, a hunter, a warrior and a maparn (traditional healer). He brought his prodigious ancestral knowledge and ritual authority to bear in his art, which he regarded as a means of bridging the social and cultural chasm between Aboriginal and kartiya (non-Aboriginal) societies. As the anthropologist Professor Fred Myers remarked in 1984, Tjapanangka was regarded by his peers and beyond as one of the eminent "cultural authorities of the Western Desert."1

In 2000, Tjumpo Tjapanangka, in the company of a number of Kukatja elders and senior artists including Lucy Yukenbarri (circa 1934 - 2003), Helicopter Tjungurrayi (born 1947) and Sam Willikati Tjampitjin (circa 1930 - 2003), made an epic journey from Balgo to Wilkinkarra (Lake Mackay), where they were born and initiated, and where they spent the early years of their lives before contact with kartiya society.

The pilgrimage had a profound effect on Tjumpo Tjapanangka’s art. Prior to the journey, his paintings tended to be relatively modest in scale and heavily laden with narrative and symbolic imagery. After the experience of visiting that country again, his paintings increased in scale, complex iconography gave way to fields of parallel lines and large geometric forms, and the emphasis in these paintings focuses on the supreme Kukatja creator beings, the Wati Kutjarra.

According to Tim Acker, the Warlayirti Artists Co-ordinator who accompanied the artists on the trip, "After the bush trip (for the Painting Country film), Tjumpo’s work – always undertaken with such certainty, anchored as it was the arc of country north and west of the great salt lake, Wilkinkarra for which Tjumpo was responsible – found a whole new level of focus. His colour choice, the rigour with which he approached the canvas, the scale of his paintings, were stripped back to something elemental. The results were minimal, though epic. While Tjumpo’s cheek and charisma were unchanged, his insistence on big canvases and his extraordinary work ethic hinted at urgency and conviction in the task of condensing the titanic work of the Wati Kutjarra and ensuring that his country would never be silent."2

In the 1980s, the artists at Balgo had gone to great lengths to integrate the new colors made available to them through the introduction of acrylic paints into their traditional system of color theory and symbolism. Nonetheless, throughout his career Tjumpo preferred the four basic colours of the traditional palette – red and yellow ochres, pilytji and kantawarra respectively, white lililpa and black maru – in combinations that correspond to Kukatja aesthetics. In his later and larger paintings, Tjumpo used sequences of alternating colored stripes that refer directly to patterns painted onto people’s bodies in ceremony, such as white and yellow in mourning ceremonies as in Wati Kutjarra, 2004.