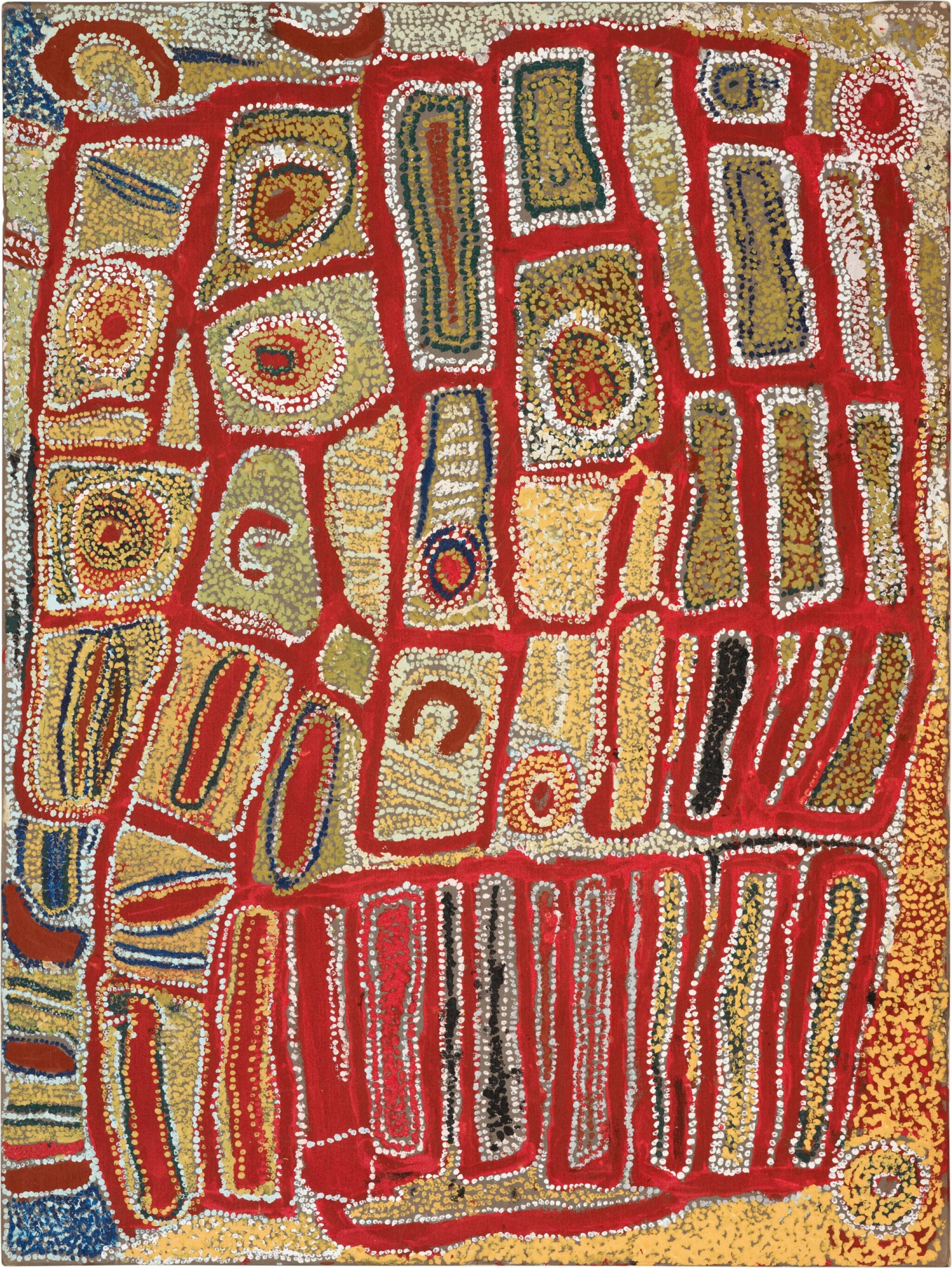 Housed in a custom box frame. The painting is in excellent condition overall with no repairs or restoration.

Painted at Wirrimanu (Balgo Hills) for Warlayirti Artists (cat. no. 250/91)
Sotheby’s, Melbourne, Fine and Contemporary Aboriginal Art, 28 November 1995, lot 601
The Thompson Marecaux Collection of Balgo Paintings, acquired at the above auction
Sotheby’s, Melbourne, 20 July 2009, lot 45, consigned by the above
Private Collection, Perth, acquired at the above auction

This painting is sold with an accompanying Warlayirti Artists certificate with an annotated diagram and description of the story depicted that reads: "Artist's Country. The painting shows an area where the artist spent his early years and which is associated with Tingari activities in the Dreamtime. Tjitji Kutjarra or 2 Children are believed to have camped here and there is an area nearby for women only which is believed to have been formed by a woman's tears. 'Maparn' or healing powers are contained in some rocks found here also."

Wimmitji Tjapangati was one of the most revered artists of the community of Balgo Hills in the Tanami Desert when they entered the public art world in the late 1980s. A deeply traditional man, until 1959 he had preferred to live away from the mission at Balgo where he established himself as an influential ceremonial and cultural leader. At Balgo, amongst his other accomplishments, he worked on an English dictionary of his Kukatja language, and assisted the eminent Australian anthropologists Ronald and Catherine Berndt in their researches into Kukatja culture.

Bringing decades of experience of painting in ritual contexts to bear in his acrylic paintings, Wimmitji preferred to use a traditional palette and often would apply paint with his fingers, in imitation of a method of painting the body with ancestral designs for ceremony. The recurring subjects of Wimmitji's paintings are the ancestral beings know as Tingari, usually described as two major beings in various guises who gave desert peoples, culture, law and language as they travelled across a landscape of stony plains, sand dunes and salt lakes. Pictorial designs associated with the Tingari feature grid-like matrices and concentric circles that indicate the presence of life-sustaining freshwater holes in the parched landscape.