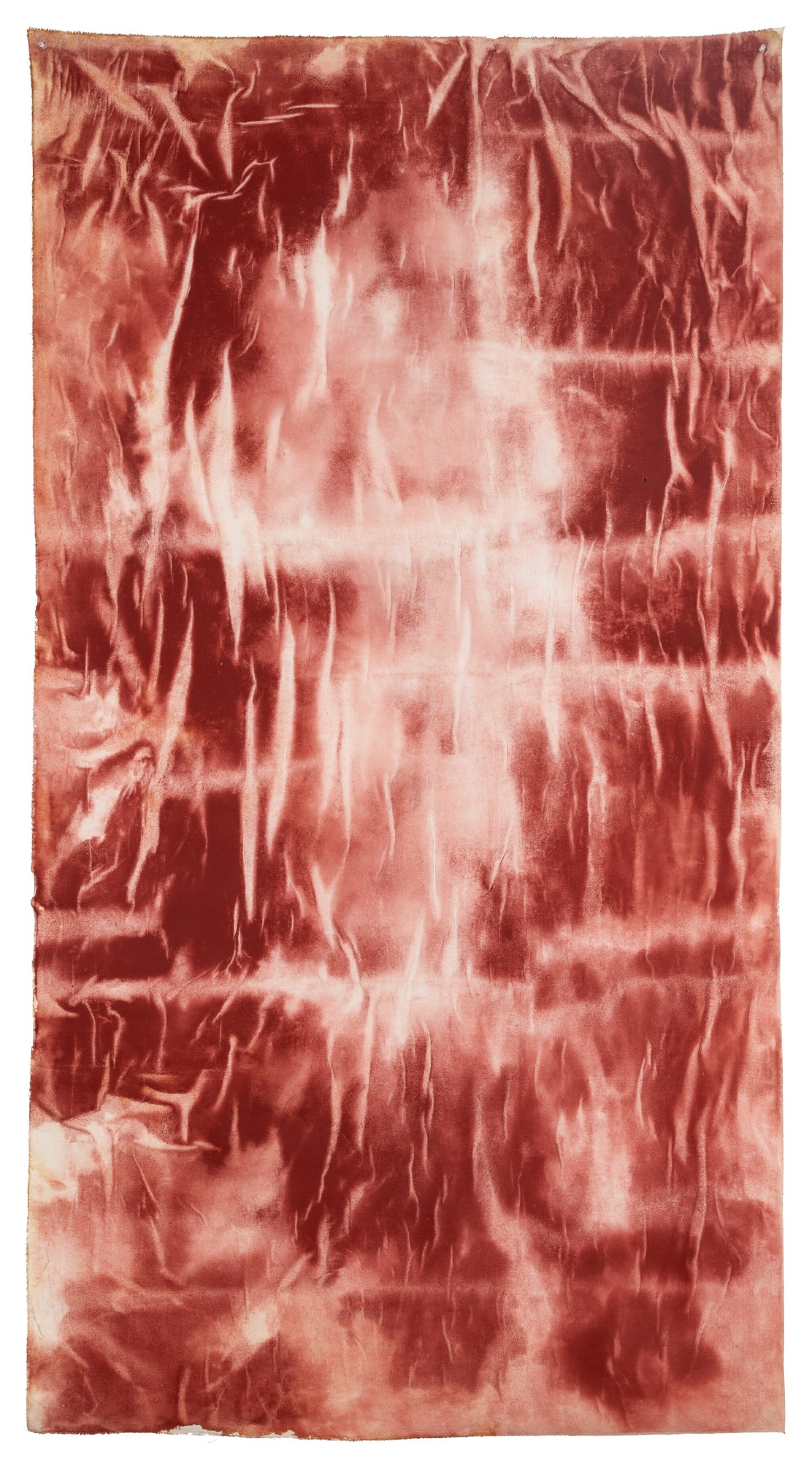 The work is unframed, in line with the intention of the artist. There are three holes at the top left and right corners and center where the art work is suspended for display. There is a tiny black spot of paint approximately 2 mm in diameter in the red oxide area in the upper right hand third of the painting, visible in photographs. It may have been there since the time of the artwork’s creation. There is a small amount cotton fraying along the bottom edge of the artwork, approximately 45 cm inwards from the left hand corner. Otherwise the work appears in good and stable condition overall.

Judy Watson was born in Mundubbera, Queensland. Judy Watson’s Aboriginal matrilineal family is from Waanyi country in north-west Queensland. The artist’s process evolves by working from site and memory, revealing Indigenous histories, following lines of emotional and physical topography that centre on particular places and moments in time. Spanning painting, printmaking, drawing, sculpture and video, her practice often draws on archival documents and materials, such as maps, letters and police reports, to unveil institutionalised discrimination against Aboriginal people. Exhibiting extensively since the 1980s, her work is represented in all major Australian state and national galleries, and significant international collections such as the Tate.

shiver is bodily in its presence, speaking of bones and blood. The calico cloth of the work, stained red with oxide, alludes to a shedding of blood—Watson’s work charts the histories of massacres against Indigenous Australians, particularly in her ancestral territories in north-west Queensland. shiver gives a sense of physical form, with the bare lines of negative space in the folds and crevices of the calico evoking a skeletal form. The image of the spine is potent for Watson, existing in her practice not only as an embodiment of physical impacts on the body, but also as a reminder of strength. Bones and spines are a “metaphor” for Watson of the backbone strength that Aboriginal women represent to their families, hers included.

shiver is a key work from Watson’s early years as a painter, in a transformative period of her practice in the early 1990s. After initially focussing on printmaking, Watson began painting on canvases and textile materials just prior 1990. She would experiment with pigments and dyeing, techniques that the artist would go on to refine in a residency at the Bharat Bhavan Arts Centre in Bhopal, India, in 1994. shiver was exhibited for the first time in 2021 for Watson’s exhibition with Carol McGregor, djillong dumularra, at Artspace, Sydney.

In 2018, Watson’s work was shown at the Art Gallery of New South Wales as part of a major retrospective exhibition. Her work is currently on display in significant exhibitions at the Tate Modern, London, the Palais de Tokyo, Paris, and the National Gallery of Australia, Canberra.