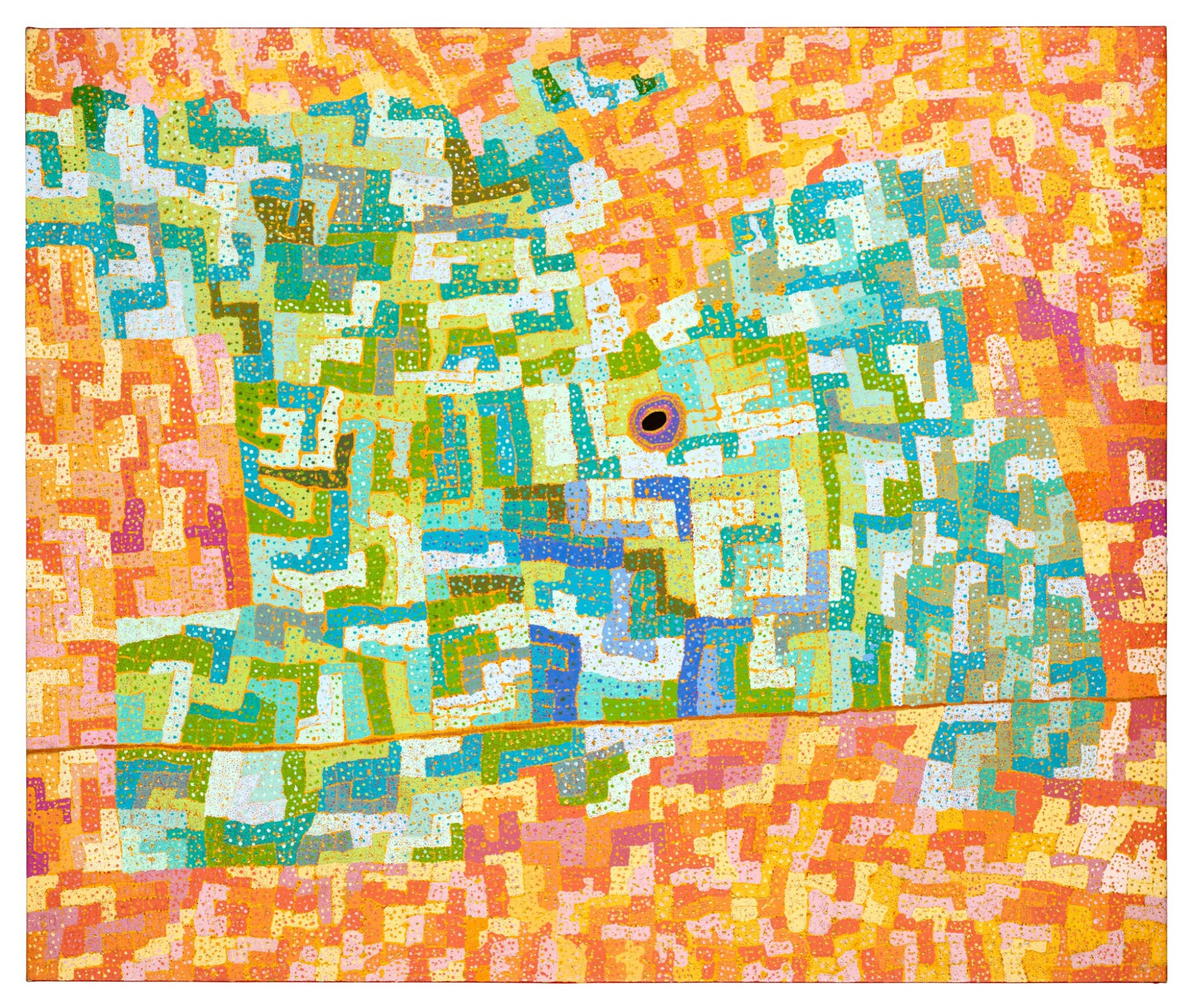 Painting is u framed and is in excellent condition overall with no visible repairs or restorations. There is some very minor scuffing at the corners.

The first seismic event to shake Daniel Walbidi’s world was in 1999, when the sixteen-year-old walked into Short Street Gallery in Broome. He approached the gallery’s manager, Emily Rohr, with an idea. He told her he was an artist. And he said there were old people in his community who needed to paint.

So began the flourishing of creativity that swept through Bidyadanga, a coastal hamlet 200km south of Broome.

Bidyadanga, once a Catholic mission known as La Grange, was home to men and women who had been brought west from the Great Sandy Desert. Their work was unlike other desert painters: bound to the cultural connections of the desert but saturated in the vibrant colours of the coast, the sea and the marine life.

Walbidi, their young intellectual leader, worked among them, listening to their stories, learning about the belief systems of the desert. At the same time, he was developing a reputation in his own right, beyond northern Australia, as a contemporary artist to watch, the next wave of Aboriginal creativity. His work carried a fresh energy and clear aesthetic focus. He stood apart from other Aboriginal desert painters in his fusion of traditions, both geographic and artistic, in a single vision.

Then came the second seismic event. In 2007, a group of Yulparija elders decided to end four decades of exile and visit their desert country again. Walbidi joined them, and in doing so he saw the vast, arid landscape that until then had only existed in his dreams—and in his art. This included Kirriwirri, the birthplace of his father’s family, and Winpa, a fresh water spring.

“That first trip, it was life changing. For me, personally, and for my art, the way I paint,” Walbidi said. “When we went out to Winpa, I was also able to make a flight over, and see the aerial view, how large and vast the salt lakes were, shimmering, and bright.”

This formative journey was the subject of a documentary called Desert Heart, narrated by Walbidi. The title was deliberately chosen. They were coastal people, he explained, but also they were desert people with desert hearts.

And so we come to Kirriwirri, with its intense concentrations of colour and sweeping aerial view. Walbidi blends the desert with the sea—yellow to orange, turquoise to green—in block patterns that expand like the tide from the waterhole that draws our eye to the centre. It carries a similar colour palette to another of his works, another key marker of ancestral country, the geometrically striking Winpa, now part of the NGA’s collection. Both paintings come to life with the qualities that will make his upcoming Gagosian exhibition in New York such a singular moment. Here is a painter who has studied the major movements of the western art world and synthesised them with knowledge closer to home. Here is a painter who looks to the sea and dreams of the desert. And here is a painter, still in his thirties, already a veteran, bridging worlds through his art.

Ashleigh Wilson is an author, journalist and arts consultant based in Sydney. He was Arts Editor of The Australian newspaper for a decade, and is the author of Brett Whiteley: Art Life and the Other Thing (2016); On Artists (2019); and A Year With Wendy Whiteley (late 2022.)