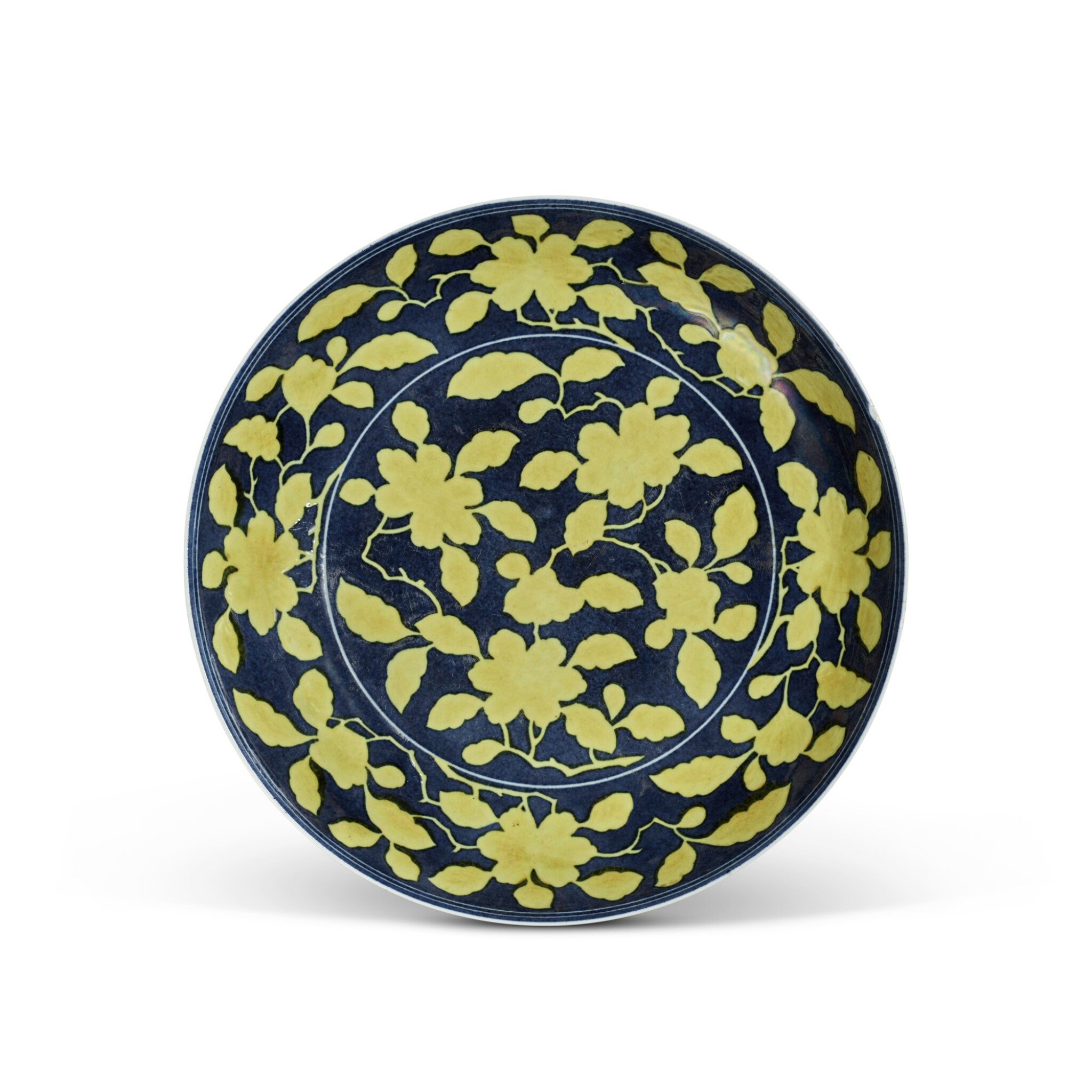 Because this lot was imported into the United States after September 1, 2020, it is subject to an import tariff of 7.5% of the value declared upon entry into the United States. $7,500, plus applicable sales tax will be included on your invoice unless you instruct Sotheby's to arrange shipping of the lot to a foreign address. For more information on the import tariff, please review the Symbol Key in the back of the catalogue. If you have any questions, please contact tariffs@sothebys.com.

Vibrantly enameled and echoing an earlier Ming dynasty design, blue and yellow dishes of this design are very rare. An example in the Tokyo National Museum is illustrated in Sekai toji zenshu, vol. 15, Tokyo, 1983, pl. 77; and an example from the Meiyintang Collection was sold in our Hong Kong rooms, 3rd April 2012, lot 48. Two further examples were sold at Christie's New York, the first 21st September 1995, lot 650, and the second, from the Hodroff Collection, on 19th September 2007, lot 307.

This design exists also in blue with white reserves only, but whereas the blue and white version may be based on prototypes of the Xuande reign (1426-35), the blue and yellow style was devised in the Yongzheng period. The Yongzheng dishes differ markedly in their technique from the Ming examples. While the Qing pieces show a speckled 'powder-blue' glaze that would have been blown onto the vessel surface through a tube covered with gauze - a form of application ideally suited for stencil reserves -  the Ming prototypes show a thick, dark cobalt-blue glaze, where white reserves were much more difficult to achieve.

A blue and white dish of the same design and provenance was in the Meiyintang Collection, illustrated in Regina Krahl, Chinese Ceramics from the Meiyintang Collection, London, 1994-2010, vol. 4, no. 843, and sold in our Hong Kong rooms, 7th April 2011, lot 75; another blue and white dish of this pattern in the Metropolitan Museum of Art, New York, is illustrated in Suzanne G. Valenstein, A Handbook of Chinese Ceramics, New York, 1989, pl. 248; and one with a different white design in the National Museum, Beijing is published in Zhongguo Guojia Bowuguan guancang wenwu yanjiu congshu / Studies on the Collections of the National Museum of China. Ciqi juan [Porcelain section], Qingdai [Qing dynasty], Shanghai, 2007, pl. 42.