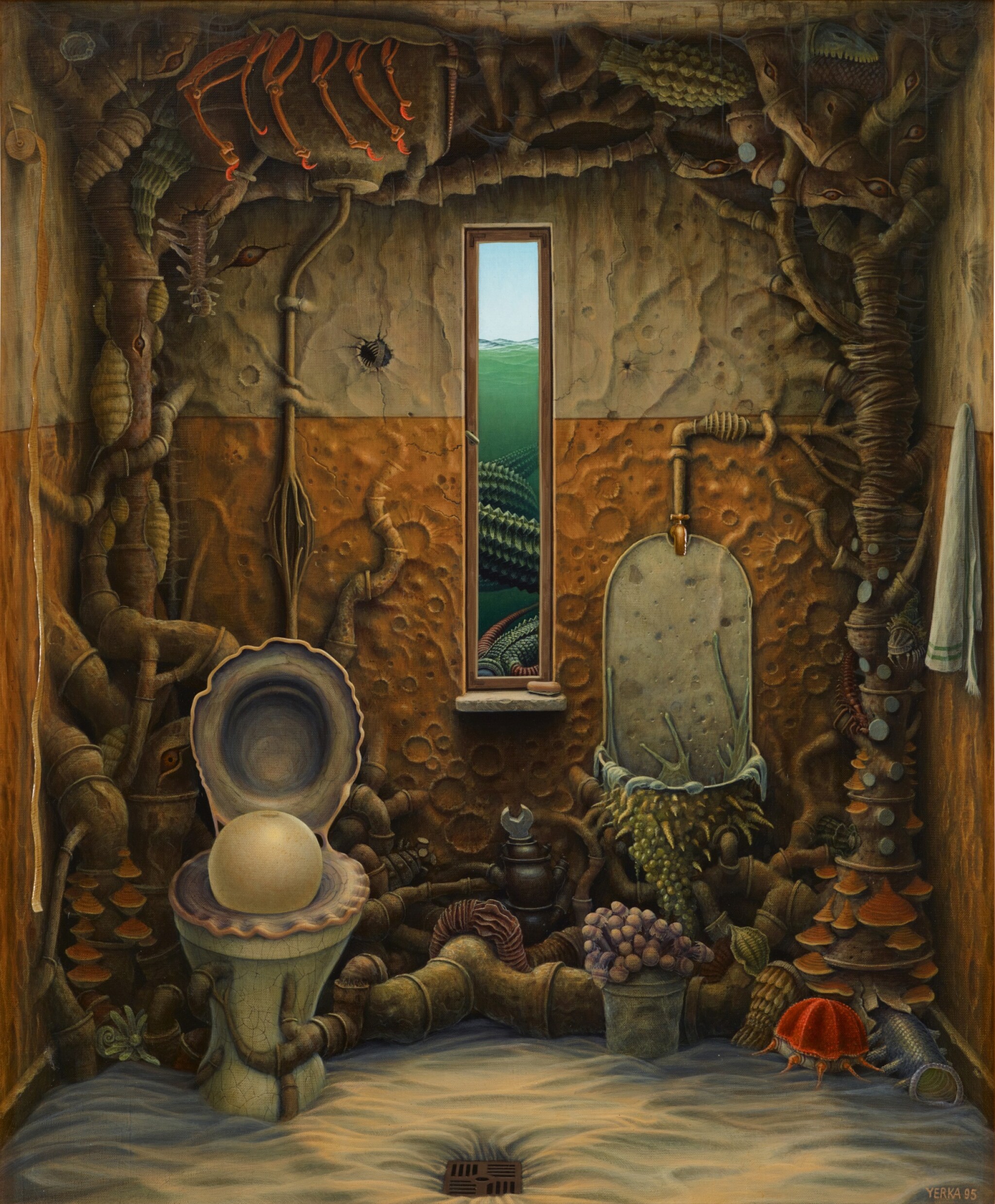 Original canvas. There are no signs of retouching visible under ultra-violet light. Overall this work is in good, original condition.

Jacek Yerka was born in Toruń into an artistic family and loved to paint and draw from a young age. His fine art and graphic design training, despite pressures from his teachers, mainly adhered to classical Flemish techniques; he would later claim Hieronymus Bosch, Pieter Bruegel, Cagliostro, Jan van Eyck and Hugo van der Goes as influences on his work. His surrealistic compositions and dreamlike landscapes reveal his unending imagination. In the present work and Underwater Tower, the other painting by the artist offered here, Yerka chooses to turn his attention to the mysteries that preponderate beneath the surface.

The influence of these Northern old master painters is much in evidence in An Oceanic Bathroom. Yerka has rendered this bizarre scene with unerring precision. Like his Dutch and Flemish artistic forebears, much effort has been expended to ensure that the paint surface is of the highest finish and that the almost imperceptible brushwork results in a seamless modulation of tone.

The painting depicts, as the title would suggest, a bathroom that has been consumed with oceanic life and appears to be half submerged in the sea. The floor is sand, and the metal pipes and basin are coated with coral and crustaceans. Indeed, the artist blurs the line between man-made material and the organic. The lavatory seat has become an open clam containing a monumental pearl. It is hard to discern where the metal plumbing ends and the intricate marine organisms begin.

The pedigree of Yerka’s artistic lineage is confirmed when we also consider that the artist was as much influenced by Surrealism as the old masters. Although the bizarre interior of this bathroom is unquestionably surreal, it is the watery exterior and the lurking sea monster that most aligns this work with the oeuvres of other Surrealist painters. The monster’s presence is made more ominous because we only glimpse it. In this, Yerka employs the same trope of an unsettling, oneiric threat of impending danger so tangible in the works of Giorgio de Chirico and Salvador Dalí. Yerka’s interest in monsters also communes with the work of other Czech and Polish artists, especially Mikuláš Medek and Zdzislaw Beksiński, both of whom are represented in the present sale.