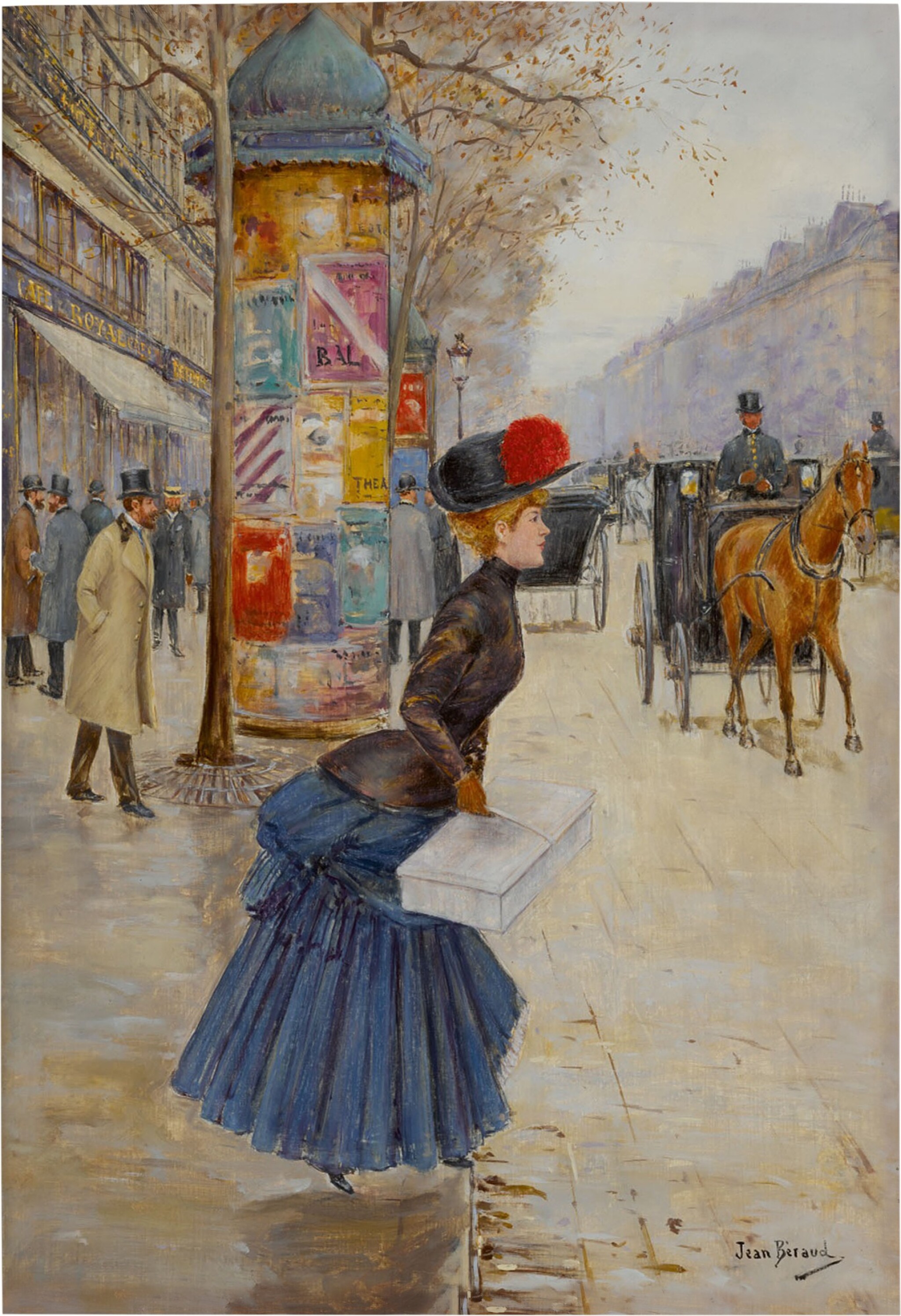 The following condition report was kindly provided by Simon Parkes Art Conservation, Inc.: Not examined out of the frame. This work is in extremely good condition. The panel is unreinforced on the reverse. The surface is flat and the paint layer is stable. The paint layer is clean. Some of the artist's original color reads quite strongly under ultraviolet light, but this does not correspond to retouching. The work should be hung in its current state.

Coquelin Cadet
Sénateur Lazare Weiller
Private collection, Paris
Sale: Sotheby's, New York, 23 May 1996, lot 325
Galerie Pierre Levy, Paris (by 2003)
Patrick Offenstadt, Jean Béraud 1849-1935, The Belle Époque: A Dream of Times Gone By, catalogue raisonné, Cologne 1999, p. 106, no. 39, illustrated.
Roslyn Harbor, New York, Nassau County Museum of Art, La Belle Époque and Toulouse-Lautrec, June 8-September 7, 2003 (lent by Galerie Pierre Levy)
Jean Béraud turns his eye to a strolling parisienne, dressed warmly against the cold, carrying a recent purchase in hand, and crossing the street perhaps to catch a ride from the approaching carriage on the Boulevard Montmartre. At left, a group of boulevardiers stand in conversation in front of the Café Royal, located steps away from the Théâtre des Variétés and the Musée Grevin, founded in 1882 and famous for its wax figures, both of which remain open today. At center is a flurry of advertisements on a colonne Morris, named for the company that received the exclusive order for advertising columns from Baron Haussmann in 1868. Gabriel Morris, a printer and typographer, had invented the columns in 1860 as an ingenious method to both display playbills and allow street-sweepers to store their equipment in the hollow core.

Various colonnes Morris appear in a series of Béraud’s works, and the artist recorded many of the playbills advertising the most popular entertainments of the Belle Époque. Here, in front of the café, a man in a tan overcoat stops to scan the colorful posters, their overlapping layers suggesting the ever-changing entertainment opportunities Belle Époque Paris offered—from public balls to theatrical productions and dance performances.

This kind of quotidian cosmopolitan subject appealed to a wide variety of collectors. Jeune femme traversant le boulevard is recorded as having belonged to Ernest-Alexandre-Honoré Coquelin (1848-1909), called Coquelin cadet. He was the younger brother of Benoit-Constant Coquelin (1841-1909), the great French actor of unusual range and versatility who created Rostand's Cyrano de Bergerac in 1897. Like his brother, Coquelin cadet was a member of the Comédie-Française and specialized in supporting comedy roles.