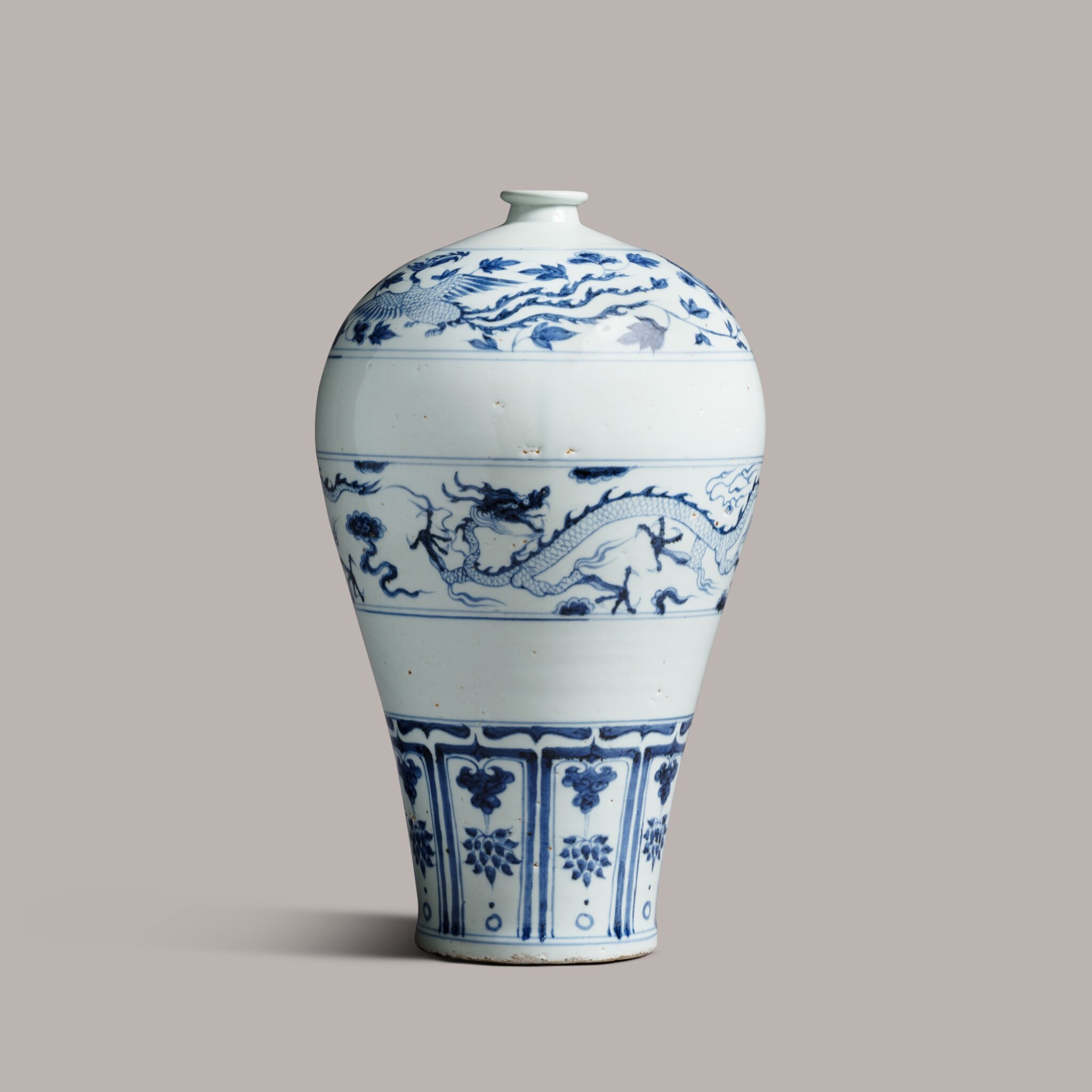 A rare blue and white 'dragon and phoenix' meiping

robustly potted with high broad round shoulders sloping down towards the tapering ovoid body, painted in rich cobalt blue tones, the main register with a wide band enclosing a pair of scrolling dragons chasing flaming pearls to the centre, set between a further decorative band over the shoulder and the foot encircled by upright and pendant lappets

The neck and rim are restored with associated areas of over spray contained within the blue circled area above shoulder, a further circa 3cm., oval area of over spray to the plain band between the phoenix and dragon bands at the upper body.

Dragon and phoenix are ubiquitous in Yuan (1279-1368) art, but it is very rare to find a piece of Yuan blue-and-white decorated with both these mythical creatures.

Emperor Wenzong (r. 1330-1332), his brother and both their wives wore dragon-ornamented garments, when they had themselves immortalized as donors on a tapestry mandala they had commissioned (Watt, op.cit., pp. 110-114 and fig. 146). Dragons and phoenixes appeared on silver ware of the period, on lacquer ware, on textiles, on Cizhou ceramics, and on a huge jade bowl in Beijing that impressed foreign visitors such as the Italian friar Odoric of Pordenone (1286–1331) (Watt, op.cit., passim). Dragon and phoenix appear also as decoration on a lute (pipa) depicted on the Juyongguan toll gate on the Great Wall outside Beijing, that was built between 1342 and 1345 (Sherman E. Lee & Wai-kam Ho, Chinese Art under the Mongols. The Yüan Dynasty (1279-1368), The Cleveland Museum of Art, Cleveland, 1968, p. 8, fig. 2).

The impression on foreign visitors of a Chinese realm frequented by dragons and phoenixes must have been overwhelming and is seen reflected, as if in mirror image, in the decoration of the Persian palace Takht-i Sulaiman, the only excavated palace site of the Mongol period in Iran. Built around the 1270s, the palace walls here were faced with local lustre tiles painted with dragon and phoenix designs in unmistakeable Yuan style (Linda Komaroff & Stefano Carboni, The Legacy of Genghis Khan. Courtly Art and Culture in Western Asia, 1256-1353, The Metropolitan Museum of Art, New York, 2002, figs 59, 97, 100-1-2, cats. 84, 86, 99-101, and p. 74).

In Yuan blue-and-white decoration, the mythical creatures also feature frequently, but rarely together. Dragon and phoenix appear of course on the iconic ‘David vases’ of 1351, but there they are painted in a very different style. Peter Y.K. Lam has discussed dragon designs on Yuan blue-and-white in a symposium in Shanghai, and has discerned five different manners of dragon representation (Peter Y. K. Lam, ‘Dragons on Yuan Blue-and-Whites as Seen from the Bands on the David Vases’, in Li Zhongmou et al., eds, Youlan shencai. 2012 Shanghai Yuan qinghua guoji xueshu yantaohui lunwenji/Splendors in Smalt. Art of Yuan Blue-and-white Porcelain Proceedings, Shanghai, 2015, vol. 2, pp. 194-205, fig. 7). The five types of dragons do not seem to signal different periods of creation, however, but perhaps different workshops or different destinations of the final products.

What is particularly unusual on the present meiping is its sparse style of decoration, with bands of blue design alternating with bands in plain white. This style is extremely rare and the only closely related vases appear to be four meiping discovered in the famous hoard of over two hundred pieces of blue-and-white, underglaze-red and monochrome white Jingdezhen porcelains and Longquan celadons of the Yuan dynasty, discovered in Gaoan, a county southwest of Nanchang, not far from Jingdezhen (Liu Jincheng, ed., Gaoan Yuandai jiaocang ciqi/The Porcelain from the Cellar of the Yuan Dynasty in Gao’an, Beijing, 2006).

The Gaoan hoard is believed to have belonged to the influential Wu family of Wujiacun [‘Wu Family Village’] at Shangquan in Gaoan. Two members of that family are particularly noted, Wu Xingfu, a consort of an imperial princess, and his son Wu Liangcheng, both government officials at Dadu, the principle Yuan capital, in the latter part of the dynasty. Wu Liangcheng is believed to have returned to his home village and to have buried the family treasures before the fall of the Yuan dynasty. The hoard most likely dates from the time when peasant revolts rocked the area, particularly in the 11th and 12th years of the Zhizheng reign (1341-1368).

The hoard contained a total of six blue-and-white meiping, all of similar size as the present piece but with covers, four very similarly decorated and two with floral designs replacing dragons and phoenixes (ibid., frontispiece and pp. 52-63). These six blue-and-white meiping were each inscribed in ink on the bases and inside the covers with the term for one of the six ‘arts’ desirable for a Confucian-educated gentleman to master: rites (li), rulership (yu), mathematics (shu), calligraphy (shu), music (yue), and shooting (she) – a most unusual treatment, but one that is considered to be in keeping with the ideology of Wu Liangcheng, who is known to have been a strong advocate of the Confucian classics.

The Gaoan meiping are very similarly decorated with pairs of phoenixes, distinguished by their tails, hovering among peonies – a combination signalling wishes for wealth and honour –, pairs of dragons among clouds, one looking forward, one turning back, and lotus blossoms in petal panels. Only three of the Gaoan pieces, however, also feature four-clawed dragons like the present vase, while on the fourth the dragons are three-clawed. The painting manner of the dragons and phoenixes on our vase differs from that of the Gaoan vases and does not appear to be by the same hand, but the lotus-filled petals around the base are very similar particularly to two of the Gaoan meiping and may well have been added by the same painter.

This fact and the rarity of this general decoration style with white borders between the design friezes, which in the Gaoan hoard is also found on a pair of guan jars (ibid., pp. 48-51), strongly suggest that the present vase was done at the same time as those of the Wu family – presumably prior to the 1350s – and may have had a Chinese owner of similar standing. This style of decoration is not associated with Yuan blue-and-white exported abroad, and Liu Jincheng (ibid., p. 12 and p. 23) stresses the fact that such rare and important porcelains could only have been obtained by the Wus due to their close contacts to the imperial house. This ethereal design concept was probably more in line with Chinese taste than the horror-vacui painting manner of most Yuan blue-and-white wares, which in the collector’s handbook Gegu yaolun (The Essential Criteria of Antiquities) by Cao Zhao of 1388 were still dismissed as ‘vulgar’ (Sir Percival David, Chinese Connoisseurship: The Ko Ku Yao Lun: The Essential Criteria of Antiquities, London, 1971, p. 143 and pl. 40b).

A decoration in bands, separated by plain white areas, is otherwise extremely rare, but can also be seen on the much published meiping from the collection of Ataka Eiichi, now in the Museum of Oriental Ceramics, Osaka, where the upper band, however, shows a lotus scroll, the central one a peony scroll, and the shape is somewhat different in its proportions; see Tōyō tōji no tenkai/Masterpieces of Oriental Ceramics, The Museum of Oriental Ceramics, Osaka, 1999, pl. 32; and Mikami Tsugio, Sekai tōji zenshū/Ceramic Art of the World, vol. 13: Ryō, Kin, Gen/Liao, Chin and Yüan Dynasties, Tokyo, 1981, col. pl. 58.

Meiping are believed to have been used for storing wine and are in wall paintings in tombs often depicted in connection with the preparation of feasts. Dragons and phoenixes often form the decoration of yuhuchun bottles and stem bowls, which in banquets may have been used together with meiping; see Youlan shencai. Yuandai qinghua ciqi teji/Splendors in Smalt. Art of Yuan Blue-and-white Porcelain, Shanghai Museum, Shanghai, 2012, cat. nos 21, 66, and 75-77.