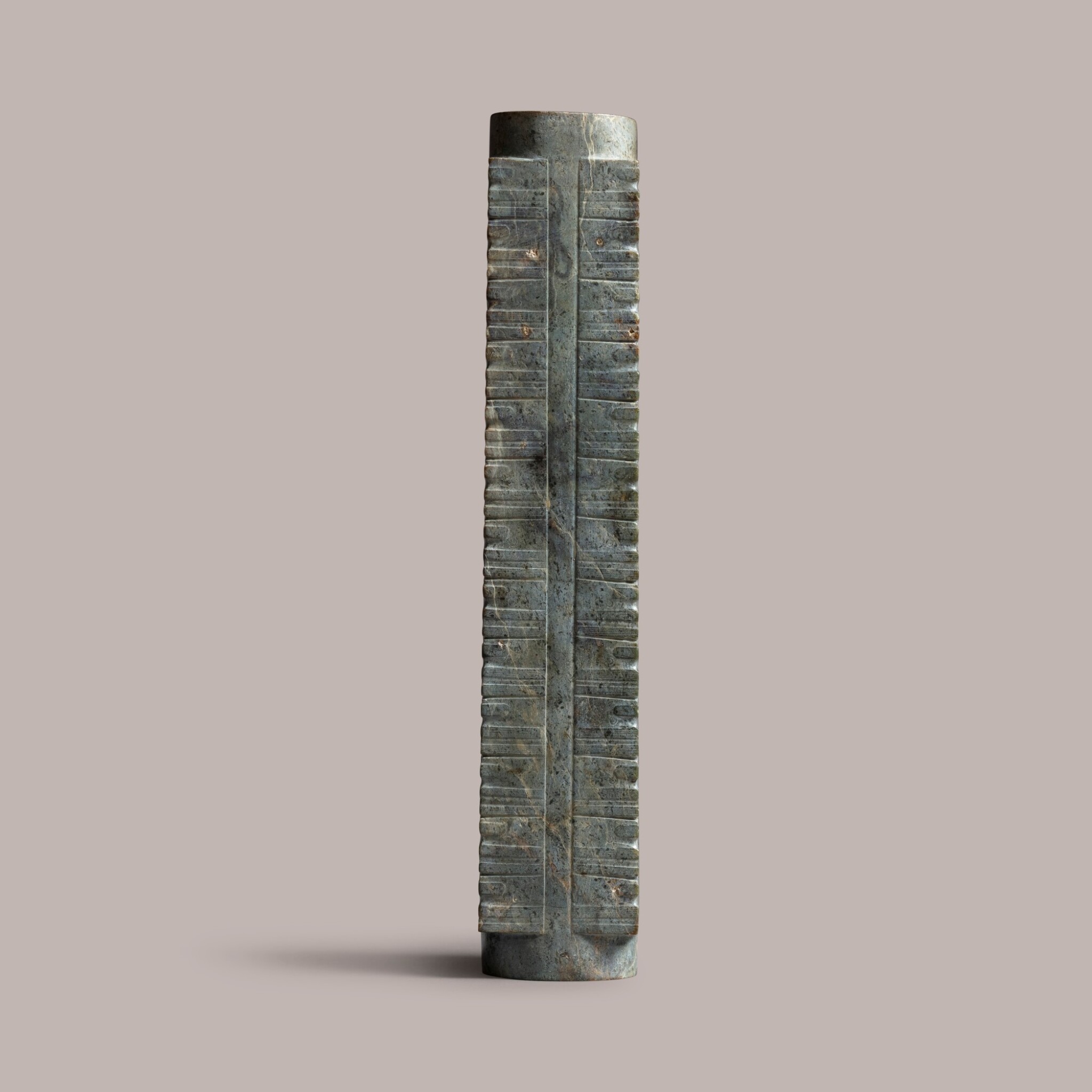 of cylindrical form with square projections on four corners, the sides slightly tapering towards the base, each corner carved with stylised mask comprising twin bands of narrow parallel grooves above incised circular ‘eyes’ and a short raised band with rounded ends for the ‘nose’, the dark green jade mottled and streaked with cloudy off-white and black inclusions

The large and impress cong is generally in good condition, with a polished

shallow chip to the rim, approx. 7 cm, wide, and a further polished chip to a

This cong is particularly remarkable for its impressive size. The carving of such a large piece of jade some thousands years ago would have been labour-intensive and time-consuming, signifying the wealth and social status of its original owners. The Liangzhu culture (c. 3300-2300 BC) has brought about a wide range of jade artefacts, including cong (tubes), bi (discs) and yue (axes), which appear to have served some important ritual or religious functions. Generally shaped as cylinders that are round on the inside and square on the outside, the form of cong is understood to encompass both heaven and earth, which are associated, respectively, with the Round and Square. According to the Jinsha Site Museum, Chengdu, the round perforation that continues right through the base implies ‘communicating between the heaven and the earth’.

Cong can vary enormously in height and diameter, ranging from wide, shallow bracelets to tall, narrow tubes such as the present lot. One of the tallest surviving cong, formerly in the collection of George Eumorfopoulos (1863-1939), is now preserved in the British Museum, London (accession no. 1937,0416.188). Multi-tiered cong comparable to the present piece are preserved in major museums around the world. See two cong of 13 sections but shorter than the present piece; one in dark green, excavated from Wujin, Jiangsu province in 1982, now preserved in the Nanjing Museum, illustrated in Liangzhu wenhua yuqi / Jades from the Liangzhu Culture, Hong Kong, 1989, pl. 45; the other in lighter colour, preserved in the Freer Gallery of Art, Washington D.C. (accession no. F2016.2). Compare also two cong closer in size to the present lot but of 15 sections; a slightly taller one, preserved in the Shanghai Museum, included in the exhibition Gems of Liangzhu Culture: From the Shanghai Museum, Hong Kong Museum of History, Hong Kong, 1992, cat. no. 56; and a slightly shorter piece, preserved in the Palace Museum, Beijing, included in the Museum’s exhibition Liangzhu yu gudai Zhongguo: Yuqi xianshi de wuqian nian wenming / Liangzhu and Ancient China: The 5,000-Year Civilization Demonstrated by Jades, Beijing, 2019, cat. no. 203.

Although the modern discovery of the Liangzhu culture began in the 1930s, its jade artefacts appear to have been unearthed in earlier times. From around the Southern Song dynasty (1127-1279), ceramic vases in the form of cong were produced, as evidenced by a tall Longquan celadon cong-style vase from the Qing Court collection and still preserved in the Palace Museum, Beijing (accession no. gu-145247), illustrated in Longquan of the World. Longquan Celadon and Globalization, vol. 2: State Vessels, Beijing, 2019, pl. 16. Ming Wilson (Chinese Jades, London, 2004, pp. 15-16) suggests that the Song potters might have been inspired by the jade cong unearthed during the construction of their new capital at Lin’an, modern-day Hangzhou, where many cong were found in recent decades.