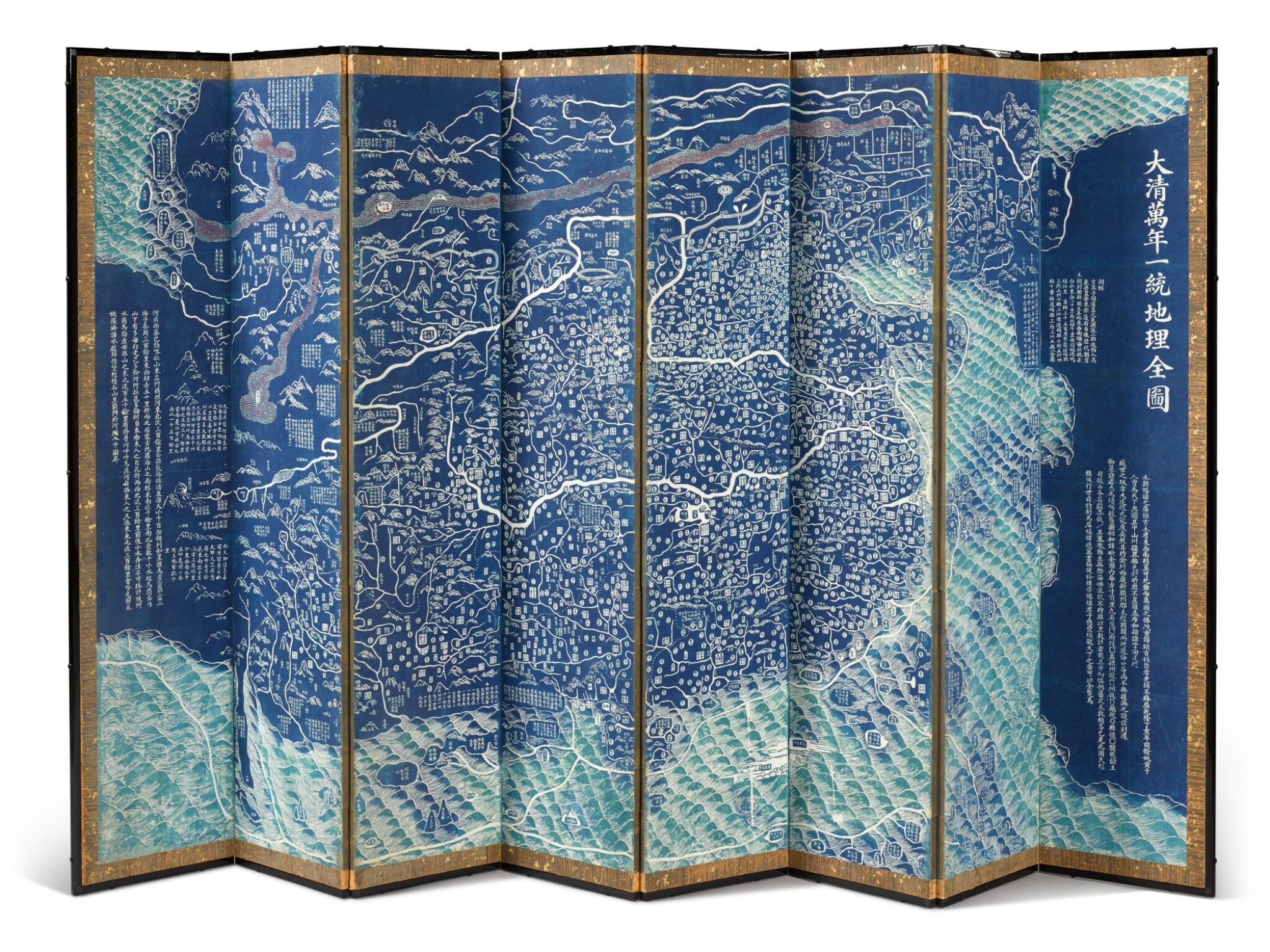 "THE BLUE MAP". A STRIKING EXAMPLE OF THIS IMPRESSIVE AND RARE MAP PRODUCED DURING THE QING DYNASTY.

The inscription immediately below the title provides an array of information about the vastness of China's territory and administrative changes that the Qing court had implemented. The inscription also mentions that this is a revised edition of a map that Huang Qianren (1694-1771) created in 1767. That map was itself based on the work of Huang Qianren's grandfather, Huang Zongxi (1610-1695). The fact that the inscription mentions the younger Huang, is likely to underline a proud family tradition of illustrious scholarly achievement. The text glorifies Manchu imperial expansion while offering an assurance that the map is completely updated. The map shows the addition of territories such as Tibet and Xinjiang, underlining the continuous strengthening of the Chinese state.

This map offers a detailed portrayal of the Chinese world: the seas surrounding China no longer contain mythological areas and European states. Lands such as the Korean peninsula, the Japanese archipelago, Taiwan and other coastal islands are reasonably rendered. A long text accompanies the foreign territories, explaining their history of political relations with the Qing. The map pays great attention to the diversity of the country of China, showing its grand nature of mountains and rivers. It also identifies provinces, prefectures, districts, and other administrative divisions by enclosing their names in squares and other shapes whose functions are interpreted in the introductory text.

"Two prominent visual features of this map do align well with the claims of China's greatness that maps of this genre tend to assert. The massive scale of this eight-part map, which fills the viewer's field of view, lends grandiosity to its subject. Moreover, the work's palette dramatically imbues its subject with antique culture, for the deep blue and green colours recall the opaque mineral pigments of the venerable blue-and-green style of painting that the aristocrats Li Sixun (651-716) and Li Zhaodao (c.675-741) popularized at the imperial court of the Tang dynasty (618-907)" (All Under Heaven).

Some wear and restoration