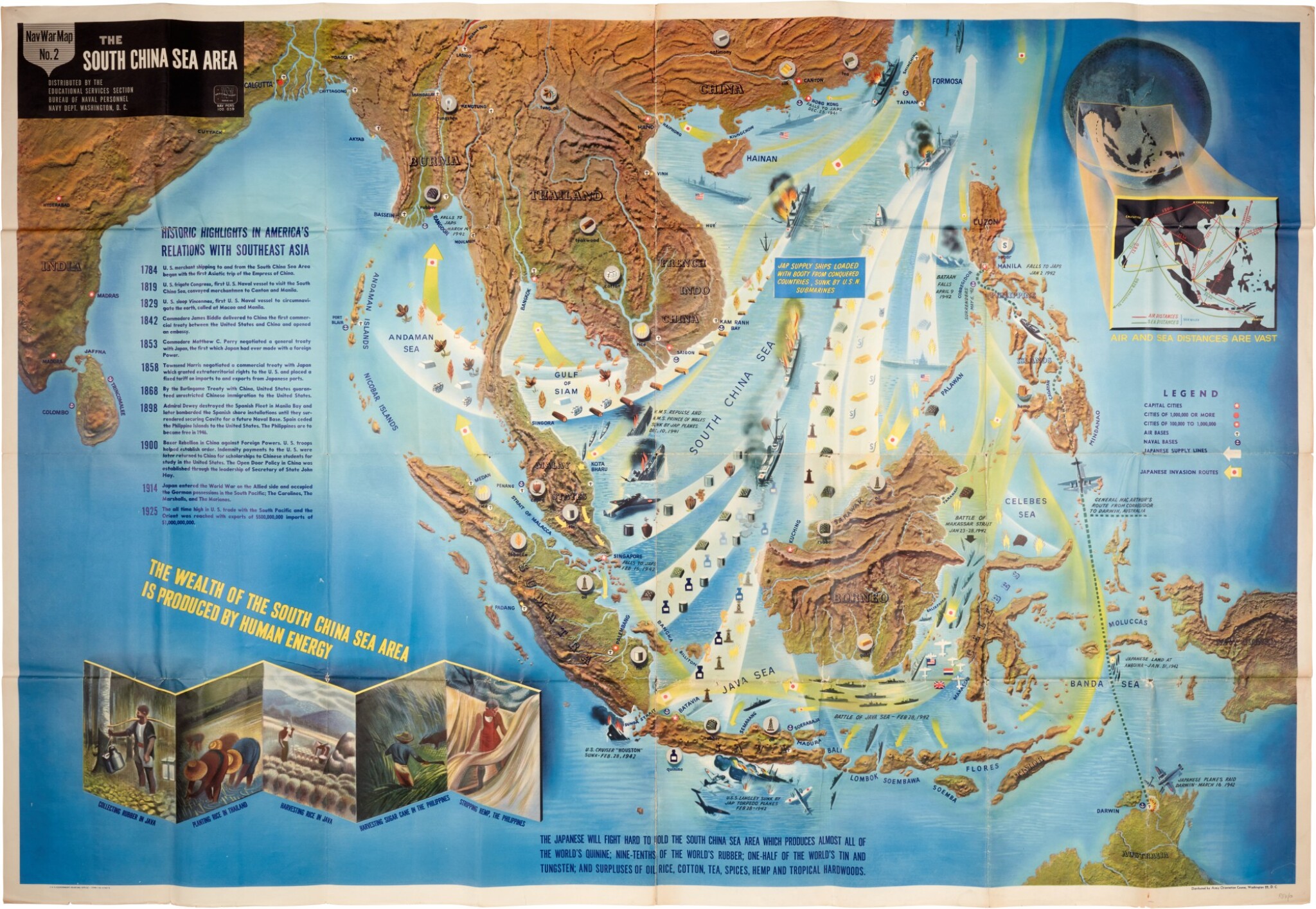 These six impressive maps, prepared by the Educational Services Section Bureau of Naval Personnel, were intended to educate US service members on the current status of the war, provide background information and statistics about the regions of the world, depict pivotal strikes and battles with vivid illustrations, denote the globalised supply chains and trade routes and reveal the actions and intentions of the 'enemy', particularly Japan and Germany.

Nav War Map No. 1 [verso]: The Mediterranean including North Africa, Cyprus, Sardinia, the Black Sea and Malta, with text and illustrations demonstrating shipping routes, its tactical significance, and facts and figures including the number of American descendants of Mediterranean countries and the history of the US navy in the Mediterranean area.

Nav War Map No. 2 [recto]: The South China Sea including the east coast of India, Thailand, China, Indonesia and north Australia, with text on the history of the US and Southeast Asia's relations, trade and produce supply chains, military bases and air and sea distances.

Nav War Map No. 3 [verso]: The North Sea area including Scandinavia, the UK, Northern France, Germany and Poland, with a history of the war so far in the area, with notable battles illustrated, bombing raids, and German invasion routes.

Nav War Map No. 4 [recto]: The North Pacific area including coasts of China, Japan and Russia and the west coast of America, with an evocative illustration of the bombing of Pearl Harbour, a chart demonstrating 'enemy' versus 'our' losses, and a textual and illustrative depiction tracking the Battle of Midway thus far.

Nav War Map No. 5 [verso]: The Southwest Pacific ocean, featuring Australia, New Guinea, and various pacific islands, showing the various military campaigns of Japan in the area. Text describes the islands and atolls of the area, with a large pictorial depiction of the Solomons Campaign. Below, an ethnographic account of the Peoples of the Pacific is augmented with portraits.

Nav War Map No. 6 [recto]: World Map showing the importance of naval forces in World War II, with red arrows depicting major supply lines, US naval action and US armed forces bases. An inset chart depicts lend-lease exports, and text states the importance of the navy in the war, and of naval supply chains.