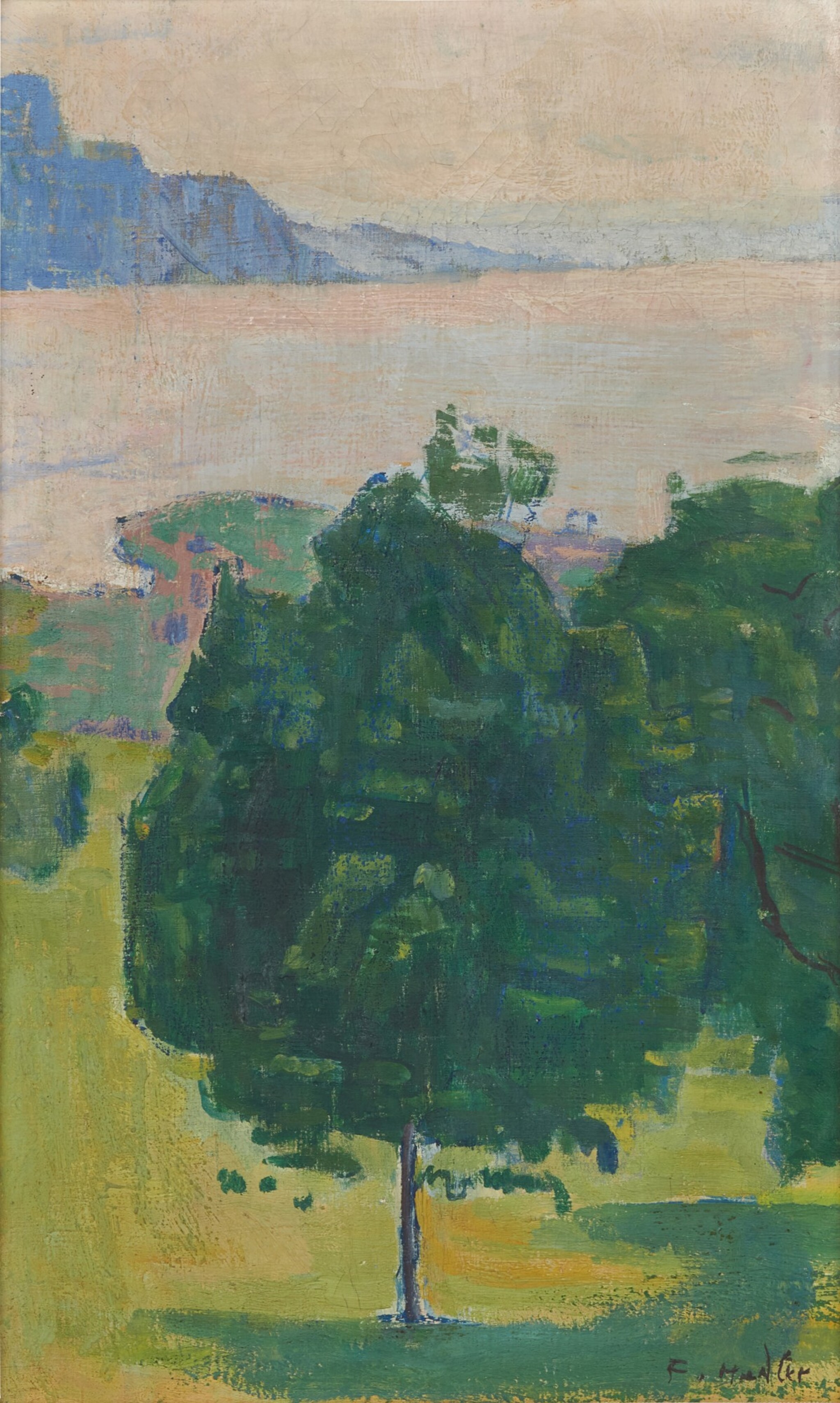 This work is registered in the Swiss Institute for Art Research (SIK-ISEA) under no. 210225 0004 and is accompanied by a certificate of authenticity. It will be included in the online Catalogue Raisonné of the artist.

This work is in very good condition. The unlined canvas is flat. Close inspection reveals minor abrasions and paint loss on all corners and along the upper and right-hand edges. A fine network of craquelure is visible in the whites of the clouds and the lake as well as in the greens and yellows around the tree trunk. Further close inspection reveals two small areas of paint loss in the centre near the right-hand margin and another one on the left-hand edge of the tree crown. Several flyspecks are visible in the upper left quadrant. No restoration is apparent when inspecting under ultraviolet light.

Private collection (thence by descent to the present owner)

The theme of the tree is a central subject in Hodler’s oeuvre. The artist painted more than 200 scenes of trees, sometimes isolated or, as here, set within a composition combining mountains, lakes and countryside scenery. Hodler’s trees are often considered a visual metaphor for the artist himself: standing alone, yet with a place in the wider world.

Recently discovered by specialists and art historians, Kirchbäume am Genfersee is the left side of a larger composition belonging to the Geneva Musée d’Art et d’Histoire. The painting has remained in the same Swiss private collection since its creation and this is the first time the artwork has been seen publicly for nearly 120 years.

Executed between May and June 1906, the canvas depicts the village of Puidoux above Chexbres, looking towards the French Alps from the Lavaux, which had been made easily accessible by train since 1862. Hodler’s composition is split into three high parallel horizontal lines depicting the land, lake and mountains. The foreground accounts for two thirds of the composition with a loosely sketched deep-green tree in the centre, anchoring the viewer’s gaze. Additional trees also occupy the remaining foreground. This subject matter was developed in Hodler’s Geneva Atelier, where the famous collectors Arthur and Edy Hahnloser used to visit the artist regularly. The cherry tree was chosen by them as the subject of their first Hodler acquisition. We can already see the principal of parallelism emerge in this painting, as Hodler uses the composition to highlight the simple order and structure inherent within nature. Hodler’s concept of parallelism was developed throughout the artist’s career and has come to define his approach and vision.