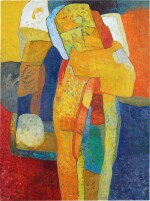 signed, dated and titled on the reverse

This work is in very good condition. The paint surface is well preserved. Very close inspection shows some minor rubbing and very light accretion in the area of the upper left corner and some light abrasion to the lower left corner. Further very close inspection reveals several minor and unobtrusive loss to tips of the impasto. Inspection under ultraviolet light shows no evidence of restoration.

Maurice Estève focused on non-figurative painting and progressed towards the autonomy of form at the turn of the 1930s. Over the years, he abandoned literal references to the figurative world and increasingly developed the spectrum of his colour palette. This artwork, dating from 1982, beautifully encompasses the central characteristics of Estève's abstract expression. The rigour of the composition and the robustness of the forms are combined with fundamental tones, exalted to saturation. An embracing couple, depicted in soft yellow tones, emerges in the centre right of the painting, yet the accumulation of abstract forms leaves room for the viewer's imagination.

Estève's compositions are constructed with great spontaneity. No prior drawings guided the artist's gestures. Colours and forms would come to life together, at the same time. Nevertheless, each work was a project lasting several hours, days and even months, which continued until the painter detected ‘life’ in it. Estève liked to speak of conversations to designate the relationship that bound him to his paintings: only the passing hours and the different metamorphoses of his compositions allowed him to see that "something was offered to him".

While Estève was never part of a particular artistic circle, he is still considered as one of the core artists who decidedly influenced the breakthrough of the École de Paris movement in the post-war era, establishing a novel pictorial language of lyrical abstraction. As sumptuously demonstrated in this artwork through layers of paint meticulously applied by the artist, a colour balance is achieved that allows light to appear. The space of the composition is suddenly multiplied and suggests depth. Just like the strings of a musical instrument, the canvas vibrates and creates a genuine visual score.