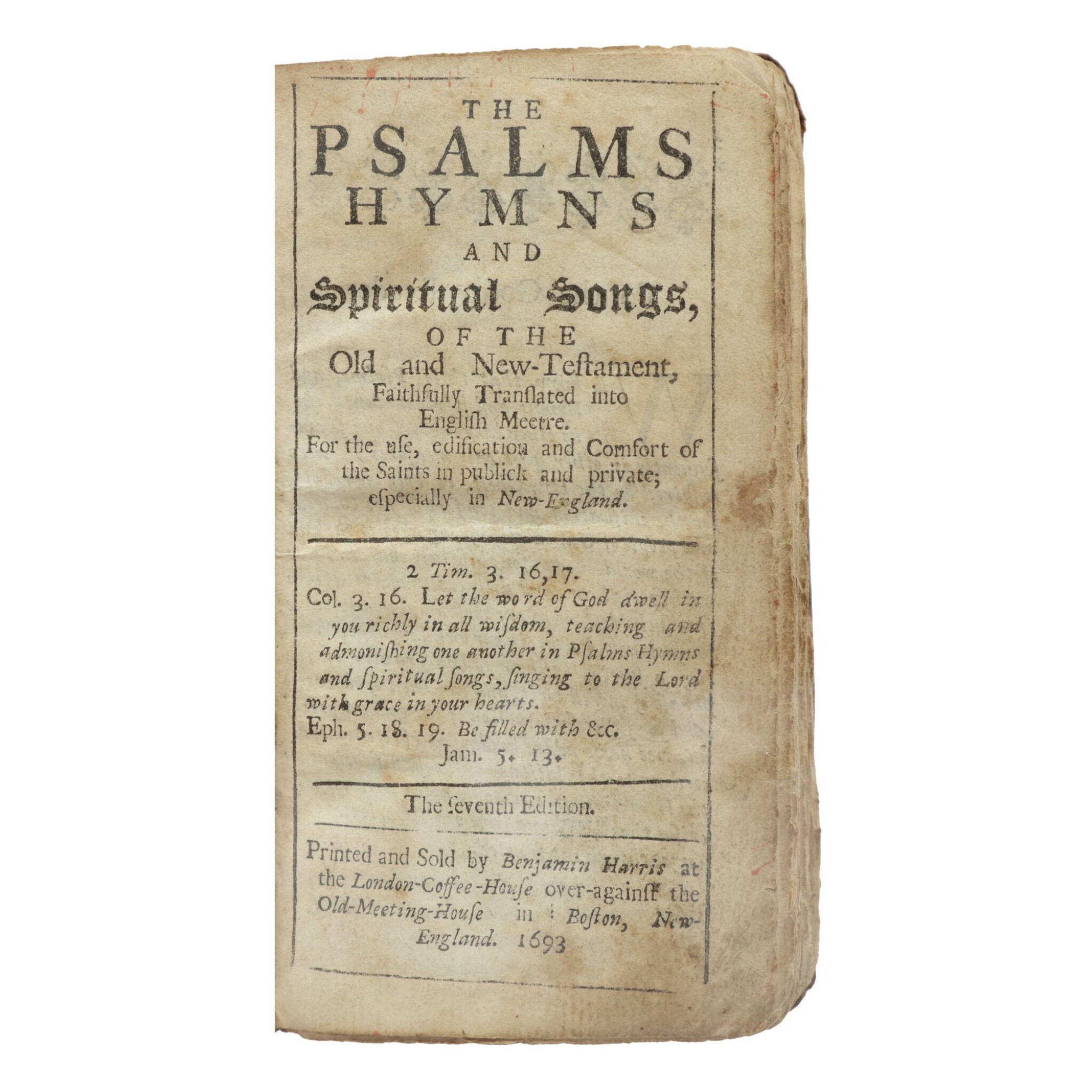 The Psalms Hymns and Spiritual Songs, of the Old and New-Testament, Faithfully Translated into English Meetre. For the Use, Edification and Comfort of the Saints in Publick and Private; Especially in New-England. … The Seventh Edition. Boston, New-England: Printed and Sold by Benjamin Harris at the London-Coffee-House over-against the Old-Meeting-House, 1693

The unique surviving copy of the earliest obtainable American edition of the Bay Psalm Book, the first book produced and printed in the British New World, from the library of a Salem witch trial judge and his wife.

The 1640 Cambridge, Massachusetts, Whole Booke of Psalmes, or Bay Psalm Book, was the first book printed in British America, the first book written in British America, and the first book printed in English in the New World. The Bay Psalm Book is a religious and cultural manifesto of the Puritan Fathers and a towering icon of the founding of the United States that was reprinted in both Great Britain and the British colonies well into the eighteenth century. When Sotheby's sold a copy of the 1640 edition from the Old South Church in Boston in 2013, it made $14,165,000—a world auction record for a printed book.

One of the fundamental innovations of the Reformation was the introduction of psalm-singing by the entire congregation rather than just by a designated choir. Puritans, like most Protestant congregations, embraced the singing of psalms as part of their worship service. Although the Massachusetts Bay Puritans had psalters in England, there were political, or denominational, issues with the standard works that probably contributed to their not being officially adopted by the Cambridge congregation.

As early as 1636 the New England Puritans were discussing the need for a translation that would more exactly express the Hebrew original, and the "chief divines" of Massachusetts Bay (to use Cotton Mather’s phrase) determined to produce their own metrical translation of the Psalms. The resulting text was the work of several hands representing the intellectual genius of colonial New England. John Cotton, Richard Mather, Thomas Welde, John Eliot, John Wilson, and Peter Bulkeley were likely the principal authors, but others among the "thirty pious and learned Ministers" that Mather counted then in Massachusetts Bay may have contributed as well. The Massachusetts Bay translation of the Psalms was adopted by Congregationalist churches throughout New England and by Nonconformists in England and went through more than fifty editions on both sides of the Atlantic. Because the psalters were essentially hymnals and used often, most of the early editions were literally read to pieces.

With the eleven copies of the first edition either in permanent institutional collections or so destined; the two complete copies of the 1651 third American edition at the New York Public Library and the John Carter Brown Library; and no copies of the second (1648?), fourth, fifth, and sixth (between 1648 and 1692?) American editions known, the present volume is likely to be the earliest American printing ever available for purchase—at least for less than eight figures.

Not traced in Evans, ESTC, OCLC; not listed among the editions of the text in Holmes's Minor Mathers 53; apparently unique and previously unrecorded until its appearance at auction five years ago.

Jonathan Corwin, one of the judges in the 1692 Salem witch trials, and his wife, Elizabeth (their inscriptions on the front free endpaper, "Jonathan Corwin"; "Elizabeth Corwin Her Book 1694/5"; the latter an unusually early mark of ownership in a book by an American woman) — Elisa Kendall (gift inscription, 1721) — Elizabeth Gray (inscription, 1752) — Cyrus Sull(?) (inscription, 1828) — a western New York family, descendants of Salem witch trial victim John Proctor, which retained the book from the late nineteenth century until consigning it to auction (Swann, 14 February 2016, lot 84)