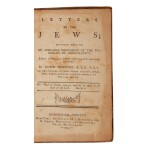 Letters to the Jews Inviting Them to an Amicable Discussion of the Evidences of Christianity with Letters to Dr. Priestley in Answer to Those He Addressed to the Jews. New York: J. Harrison for B. Gomez, 1794

The first text by the prominent but controversial English theologian Joseph Priestley comprises a number of conversion exhortations. The second work is a point-by-point rebuttal of Priestley’s arguments by the eminent Jewish writer and printer David Levi.