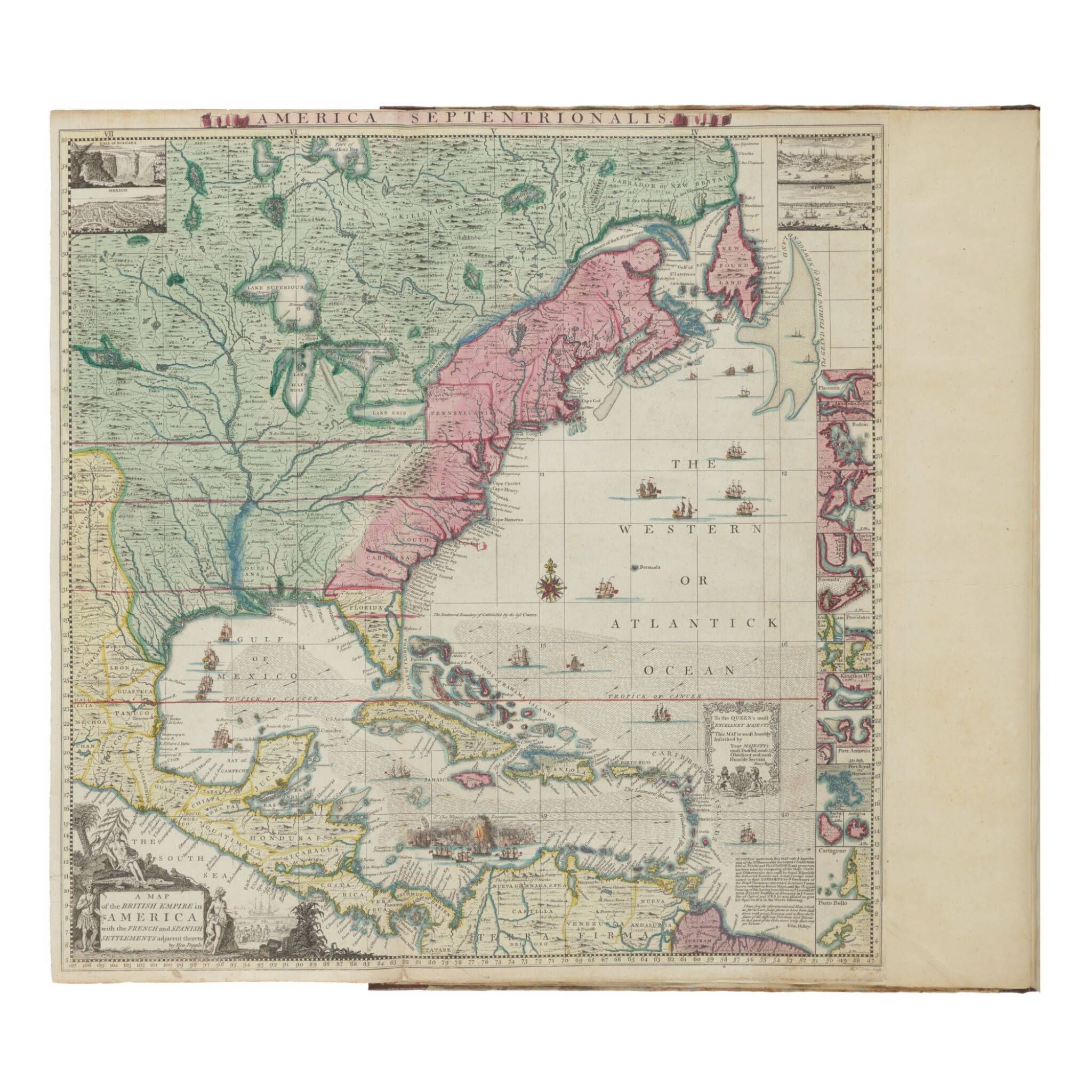 A Map of the British Empire in America with the French and Spanish Settlements Adjacent thereto. London: S. Harding and W. H. Toms, 1733 [–1734]

The first large-scale map of British possessions in America, and one of the two most important large-scale maps of colonial America, in superb condition with brilliant coloring. "A fundamental centerpiece of any serious collection of North American maps" (Babinski, p. 5).

The territorial struggle to lay claim to lands in North America was carried out by French and English mapmakers for decades. Popple worked for a short period at the Board of Trade of Plantations in 1727, while his brother Alured was Secretary of the Board of Trade. It would have been apparent to both Popple brothers that there was an increasing need for maps substantiating English claims to lucrative lands. Popple's goal was to illustrate British colonial possessions in America relative to the claims of France and Spain. Although the map bears Popple's name, the actual draftsman was the Channel Islander Clement Lempriere, a military cartographer attached to the Corps of Engineers and later Chief Draftsman at the Tower of London. Evidently Popple and Lempriere had access to a number of important manuscript and printed sources and compiled these in the making of this remarkable map of British possessions. For the lower Mississippi and the layout of the Great Lakes, Delisle's 1718 Carte de la Louisiane et du Cours du Mississippi was consulted. They relied on Nicholas de Fer's La France Occidentale dans L'Amérique Septentrionale to delineate Spanish settlements on the Rio Grande and territory west of the Mississippi Valley. The southeastern colonies are taken from John Barnwell's manuscript of about 1721, on deposit at the Board of Trade and Plantations, which included the most current information on Indian settlements in the interior. For New York and the region south of the Great Lakes, Popple culled information from Cadwallader Colden's Map of the Country of the Five Nations. In early spring of 1734, Popple was also able to incorporate significant changes to South Carolina and Florida based on new information from James Edward Oglethorpe, who had just returned from the Georgia settlement. The present copy contains sheet ten in the third state of the map with the updated information.