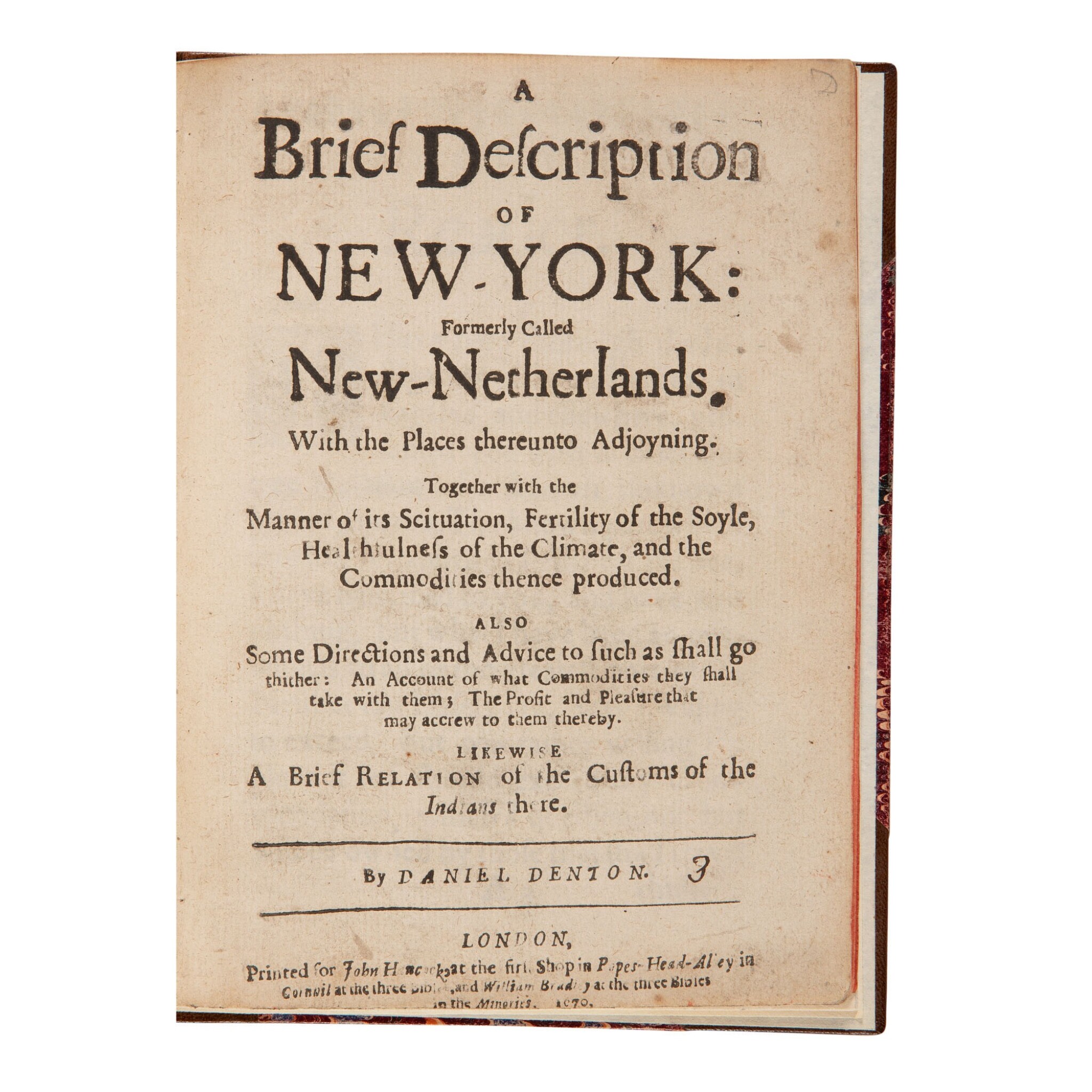 A Brief Description of New-York: formerly called New-Netherlands. With the Places thereunto Adjoyning. Together with the Manner of its Scituation, Fertility of the Soyle, Healthfulness of the Climate, and the Commodities thence Produced. Also some Directions and Advice to Such as Shall Go Thither: an Account of what Commodities They shall Take with Them; the Profit and Pleasure that may Accrew to Them thereby. Likewise a Brief Relation of the Customs of the Indians there. London: printed for John Hancock, at the first Shop in Popes-Head-Alley in Cornhil at the three Bibles, and William Bradley at the three Bibles in the Minories, 1670

First edition of "the first account of New York printed in English, and very rare" (Sabin). Daniel Denton was born in Yorkshire in 1626 and travelled with his father, a Presbyterian minister, to America in the early 1640s. Apart from a brief sojourn to London, where he wrote and published A Brief Description of New-York, Denton, who died in 1703, spent the rest of his life in New York and New Jersey, working as a local government official.

Historian Kevin J. Hayes calls Denton's Brief Description "a minor classic of early American literature" and "[a]fter the works of Captain John Smith … the finest American promotional tract of the seventeenth century": "Denton appealed to potential immigrants on multiple levels. Describing New York City as mostly 'Brick and Stone, and covered with red and black Tile,' he countered the traditional stereotype by letting his English readers know that they would not be immigrating to a howling wilderness. He also emphasized the colony's plentiful natural resources: timber, fruit, fish, and game. … He appealed to people with widely varying skills and interests—entrepreneurs, farmers, and tradesmen, He also emphasized the opportunities in New York that were unavailable in the Old World" (American National Biography). Throughout his work, Denton implies that the original Dutch settlers never fully appreciated the promise of the New York region and urges his readers not to make the same error. John Ogilby freely appropriated Denton's text for the section on New York in America, his 1671 expansion of Arnoldus Montanus's 1670 De Nieuwe en Onbekende Weereld.

The text block of A Brief Description of New-York was evidently set to a smaller forme than the title-page, with the result that all but a few copies have either or both the imprint and the first word of the title cropped by their first binders; in the present copy, the final line of the imprint is just touched and the title is completely unscathed. The work is rare regardless of condition: only two other copies appear to have been sold at auction since 1937.