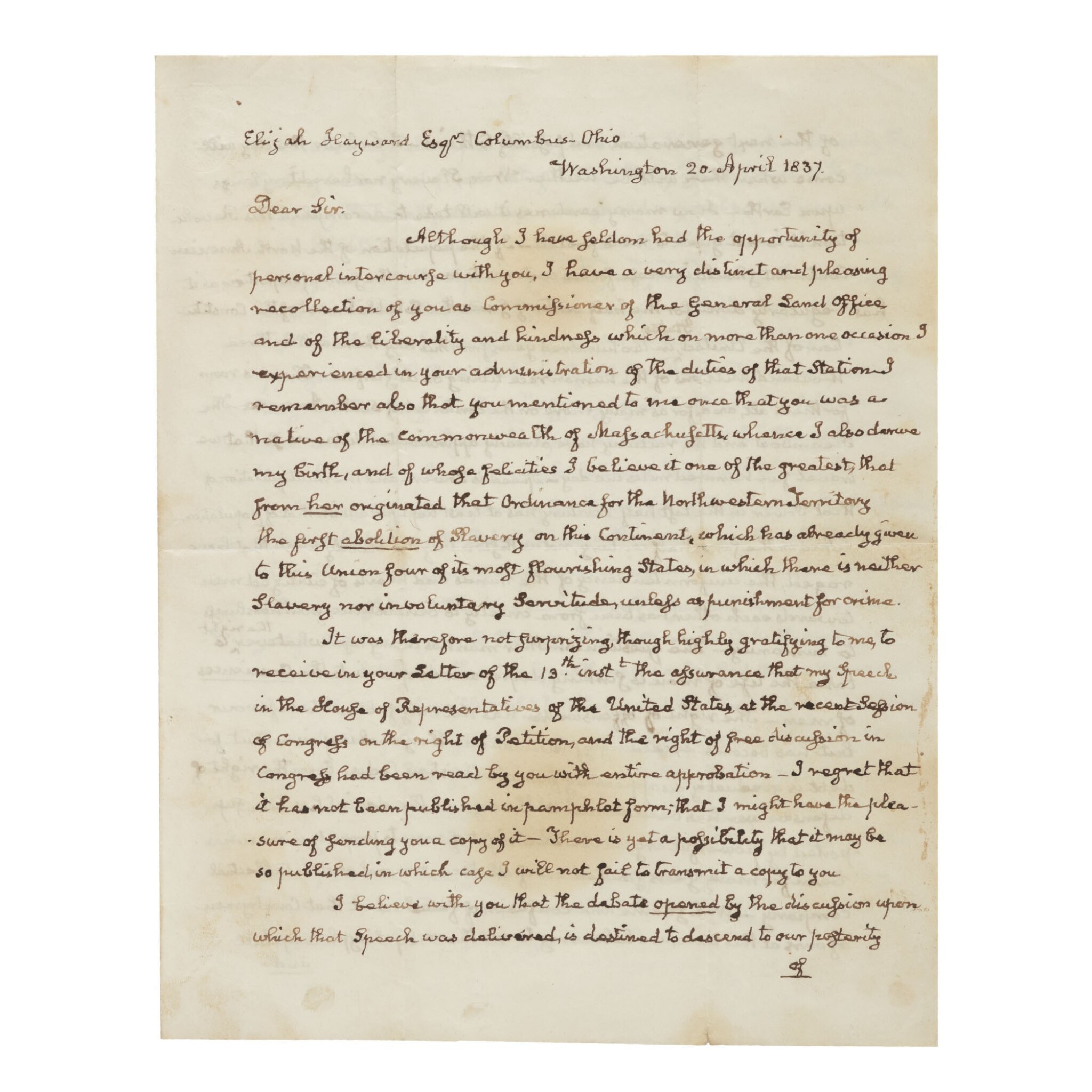 Autograph letter signed ("J. Q. Adams") as a Representative from Massachusetts, to Elijah Hayward, harshly criticizing the institution of slavery, foreseeing its end in the United States, and predicting a better future for the human race

In a magnificent letter revealing the increasing passion of his antislavery beliefs, John Quincy Adams forcefully condemns the institution of slavery: "It shocks the moral sense of every soul not contaminated by the practice of oppression."

In May 1836 the House of Representatives adopted a resolution that became known as the "Gag Rule." This resolution, readopted and even strengthened by subsequent congresses, automatically "tabled," or postponed action on all petitions relating to slavery without hearing them. John Quincy Adams quickly became the leader of the opposition to this stifling of the voices of enslaved persons and abolitionists. He here elaborates his views to Elijah Hayward, a Massachusetts native then resident in Ohio, who had written to Adams to congratulate him on his maiden speech on the controversy. While clearly demonstrating Adams's righteous anger about slavery, the letter also reveals a deep confidence in humanity's ability to improve itself.

Adams begins by assuring Hayward that he remembers him and recollecting to him the pride they should share in their home state: "I remember also that you mentioned to me once that you was a native of the Commonwealth of Massachusetts, whence I also derive my birth, and of whose felicities I believe it one of the greatest, that from her originated that Ordinance for the Northwestern Territory the first abolition of Slavery on this continent, which has already given to this Union four of its most flourishing states, in which there is neither slavery nor involuntary servitude, unless as punishment for crime."

Adams advances gradually to the subject of slavery and the gag rule, first enumerating the various other changes he foresees in coming generations. "I believe the day will come when there will be neither war, slavery, nor hereditary kings upon earth. How many centuries it will take to accomplish this revolution it is not given to me to foretell. If the population of the North American continent should increase for two centuries to come in the same proportion as it has regularly done for the half century since the establishment of the Constitution of the United States, in two hundred years from this day there will be three thousand millions of the human race living on its surface. There is room for them all, and for as many more on the continent of South America. The steamboat and the railway have already approximated distances so that we travel five hundred miles in a day. Speed is power, and the multiplication of that power in the last half century has at least kept pace with that of population. And in the same half century, notwithstanding the bloody wars that have waged, the uniform tendency of the minds and hearts of civilized men towards each other has been from cruelty to benevolence, from harshness to humanity. The question whether man has in any case whatever the right to take the life of man is sinking deeper and deeper into the Consciences of men. The right of offensive war has not only fallen into disfavor but has become exceedingly problematical. Personal imprisonment for debt is gradually disappearing from all Christian Codes. Even the right of defensive war has been denied in theory, and the denial has been supported by powerful arguments."

Warming to his subject, Adams takes direct aim at the hypocrisy of slavery and the deformed logic of those who would defend it. "The right of man to property in man has been for many years scoured out of all decent moral and intellectual company. With shame and confusion of face I ask it that countrymen of ours at this time are laboring to roll this rock of Sisyphus uphill and are heaping Pelion upon Ossa, to prove that slavery is sanctioned by the laws of nature and of God; but if Julian the apostate, armed with Genius, Learning, Philosophy, dauntless courage and imperial power was unable to establish upon the throne of Heaven the three hundred thousand Gods of Rome, the Sophists of tyranny never will reinfuse into the hearts of men the belief that eternal Justice can approve the bondage of slavery. It shocks the moral sense of every soul not contaminated by the practice of oppression."

In a moving anecdote, Adams references his political opponent, John Randolph of Roanoke, an aristocratic planter and congressman, who manumitted his slaves, "heartily regretting that I have ever been the owner of one." Adams reminds Hayward that "John Randolph declared the Declaration of Independence, the great charter of mankind, 'a barrage of abstractions'—but John Randolph died with "Remorse" upon his lips, and emancipated his slaves by his Will, 'because in his conscience he believed they ought to be free.'"

In a stirring passage, Adams next links slavery to monarchy, an institution that the United States had already thrown off, invoking the Declaration of Independence and referring to enslaved persons as America's "own people": "Slavery is a part and parcel of the divine right of kings, and no thinking man can read Hobbes and Sir Robert Filmer, without perceiving that all the arguments which they urge in favour of despotic power in Government, and against the theory of human rights, are the identical and only arguments by which a colour of justification can be given to slavery. This must eventually be the sense of all mankind; but that in this Country, with an appeal to God that all men are born with an inalienable right to Liberty; and that this is a self-evident truth—that a nation founding its existence upon the proclamation of that law, should suffer its ears to hear from its own degenerate Sons, that one sixth part of its own people are chattels, to whom no rights can belong [here, words seem to fail Adams, who resorts to writing a series of ellipses before continuing] my dear Sir, when Daniel O'Connell in the British Parliament, pronounces us in the face of Heaven and Earth a Nation of Hypocrites and Liars, we may answer him with Billingsgate upon Earth, but will Bishop England just from Hayti tell us what we shall say to Heaven?"

As he nears his conclusion, Adams's rhetoric becomes more vehement, before closing with a more reflective, conciliatory, and hopeful tone. "No—never, never can Slavery again be reconciled to the rights, or to the duties of man. Our slave-trading Professors, and Governors, and Chancellors, and Bishops, may cauterize their own consciences and those of their accomplices, while they live, with sophistication worthy of Belial Pandemonium, but with John Randolph, 'Remorse' will be their dying word, without even the atonement of emancipating their Slaves at death. They may, and I fear will rivet the chains of slavery upon their unhappy fellow creatures whom they hold in bondage. They may, and I fear will restore the extinguished curse of slavery in Mexico, and thereby fortify and reinforce and spread its odious dominion in our own country; protracting its final doom for unblest ages to come—but in the chancery of Heaven that doom is sealed—Slavery shall vanish from the earth; and the race of man, descended from one father, shall live as a band of brothers upon Earth. … Your letter has led me far into futurity, and far beyond my depth. In the anticipation that for two hundred years to come the population of the North American continent will increase with the same rapidity that it has in the five decades of the last half of the last century … and we contemplate what this mass of physical, moral, and intellectual congregated human power may effect for the improvement of the earth, and of the condition of its mortal and immortal inhabitant, may we not in humble hope invoke the blessing of the Father of Spirits upon every purpose intended to promote the universal emancipation of man?"

Celebration of My Country 179; cf. Miller, Arguing About Slavery: The Great Battle in the United States Congress (New York, 1996)