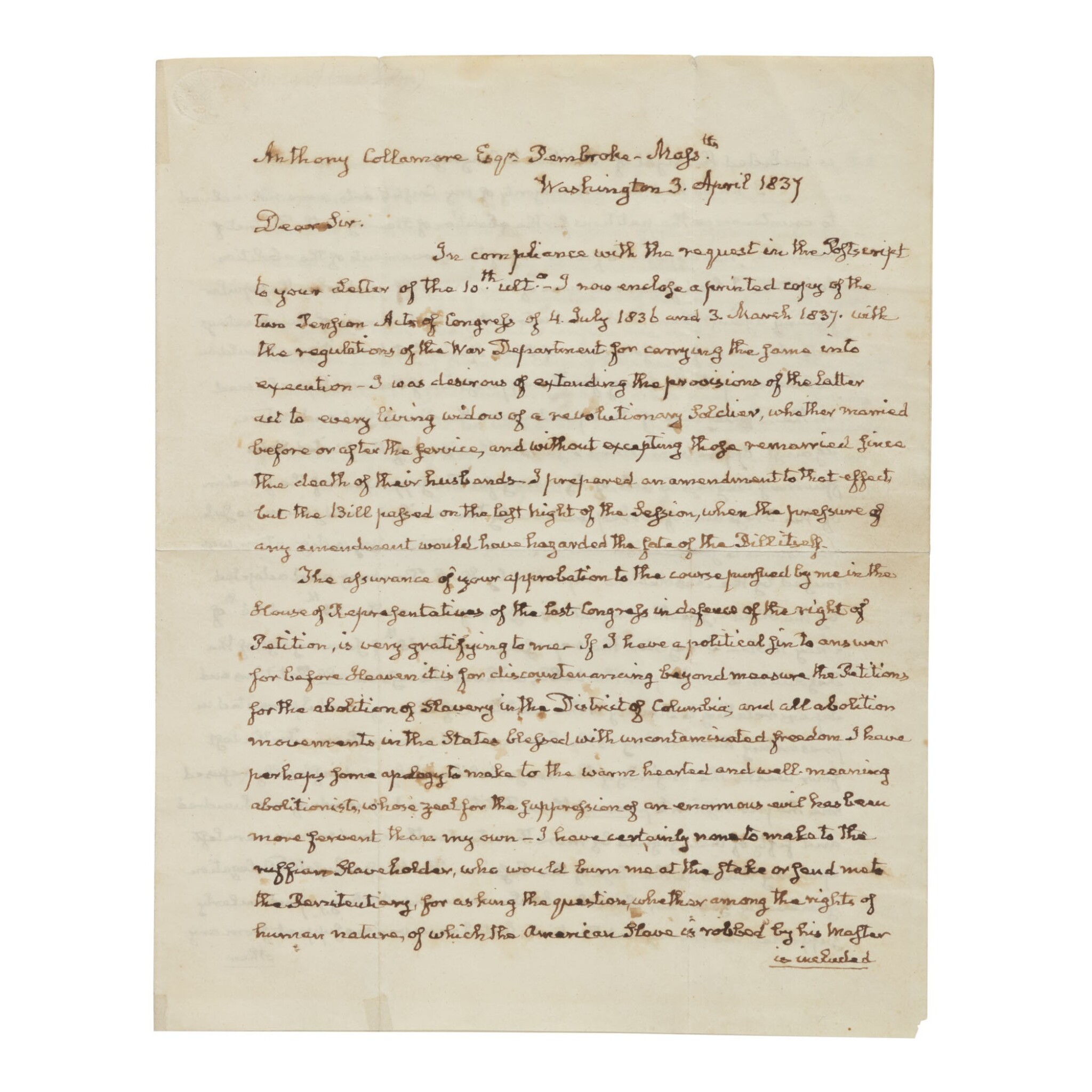 Autograph letter signed ("J. Q. Adams") as a Representative from Massachusetts, to Anthony Collamore (at Pembroke, Massachusetts), describing his efforts to win for enslaved persons and abolitionist organizations the right to petition Congress

John Quincy Adams acknowledges the support of his constituents in his lonely battle to defend the right of slaves to petition Congress: "whatever flinching from the cause of human freedom, and the rights of American citizens there may be in other parts of the Union, Massachusetts will be true to her principles, and the descendents from the Pilgrims of Plymouth will not dishonour their forefathers."

In 1837, John Quincy Adams, the sixth President of the United States, was serving his fourth term as a congressman from Massachusetts—the only former chief executive to return to Washington as a federal representative. Although Adams had long been a private opponent of slavery, the present letter is one of the earliest public articulations of his recent and ardent antislavery position. As William Jerry MacLean has written, "The early months of 1837 became for John Quincy Adams the time when strongly held humanitarian concerns … allowed him to take a bold public stand against slavery." Adams undertook a solitary effort in the House of Representatives for the right of abolitionist organizations to present petitions to Congress. Adams faced monumental Southern opposition in this effort, but he endured vilification and even threats of censure, and in 1844 he saw the civil right of petition restored.

Even while thanking Collamore and other citizens of Massachusetts for backing his efforts, Adams apologizes for not previously being as zealous in his abolition views as many of his supporters. "The assurance of your approbation to the course pursued by me in the House of Representatives of the last Congress in defence of the right of Petition is very gratifying to me. If I have a political sin to answer for before Heaven it is for discountenancing beyond measure the Petitions for the abolition of slavery in the District of Columbia, and all abolition movements in the States blessed with uncontaminated freedom. I have perhaps some apology to make to the warm hearted and well-meaning abolitionists, whose zeal for the suppression of an enormous evil has been more fervent than my own—I have certainly none to make to the ruffian Slaveholders, who would burn me at the stake or send me to the Penitentiary, for asking the question, whether among the rights of human nature, of which the American Slave is robbed by his master, is included the right of Petition to Congress."

On the question of the right of petition, however, Adams allows for no flexibility, excoriating his fellow congressmen and former White House rival Andrew Jackson alike. "I know that the vast majority of my Constituents, were not inclined to countenance the petitions for the abolition of slavery in the District of Columbia, nor disposed to favour any of the movements of the abolition societies. I had favoured none of them myself—but when the popular feeling against them, broke out into riotous disturbances of their meetings, into demands from the Governors of Slave States, that free citizens should be delivered up to be hung for the expression of sentiments proclaimed in the Declaration of Independence as the Law of God and Nature, against oppression, when I saw the President of the United States spurring Congress to acts of tyranny for the suppression of the freedom of the Press and of correspondence by mail, I could join in no such measures to silence the voice of Petition. My indignation was roused by the Resolutions reported by H. L. Pinckney, and adopted by the House, smothering all discussion of them on the 25th and 26th of May 1836.—I revisited the repassage on the 8th of January last, of the papers relating to slavery or the abolition of slavery, and I persisted in presenting them as the house would receive them. For the last four weeks the majority of the house deliberately and inflexibly refused me the permission to Present these Petitions, and upwards of one hundred and fifty of them signed by more than twelve thousand names, were left upon my hands at the close of the session. The Massachusetts Delegation … particularly supported me throughout this trial; but I received no support from any other quarter of the House, and nothing was left to sustain me, but the approving voice of my Constituents.

"The proceedings of the Legislature of the Commonwealth upon the subject have also served to confirm me in the conviction, that whatever flinching from the cause of human freedom, and the rights of American citizens there may be in other parts of the Union, Massachusetts will be true to her principles, and the descendents from the Pilgrims of Plymouth will not dishonour their forefathers." This statement demonstrates the accuracy of David Fredrick's observation that "more than any other congressman, Adams seized on the relationship between slavery and the right of petition and best articulated the idea that the bondage of blacks in the South infringed the freedom of white petitioners in the North."

Adams actually began his letter on another, seemingly more mundane topic: military pensions. "In compliance with the request in the Postscript to your Letter of the 10th ulto., I enclose a printed copy of the two Pension Acts of Congress of 4 July 1836 and 3 March 1837 with the regulations of the War Department for carrying the same into execution. I was desirous of extending the provisions of the Latter act to every living widow of a revolutionary Soldier, whether married before or after service, and without excepting those remarried since the death of their husbands." In fact Adams's effort to see Revolutionary war widows fully provided for by the nation is a perfect corollary to his insistence that the United States live up to the principles of the Declaration of Independence.