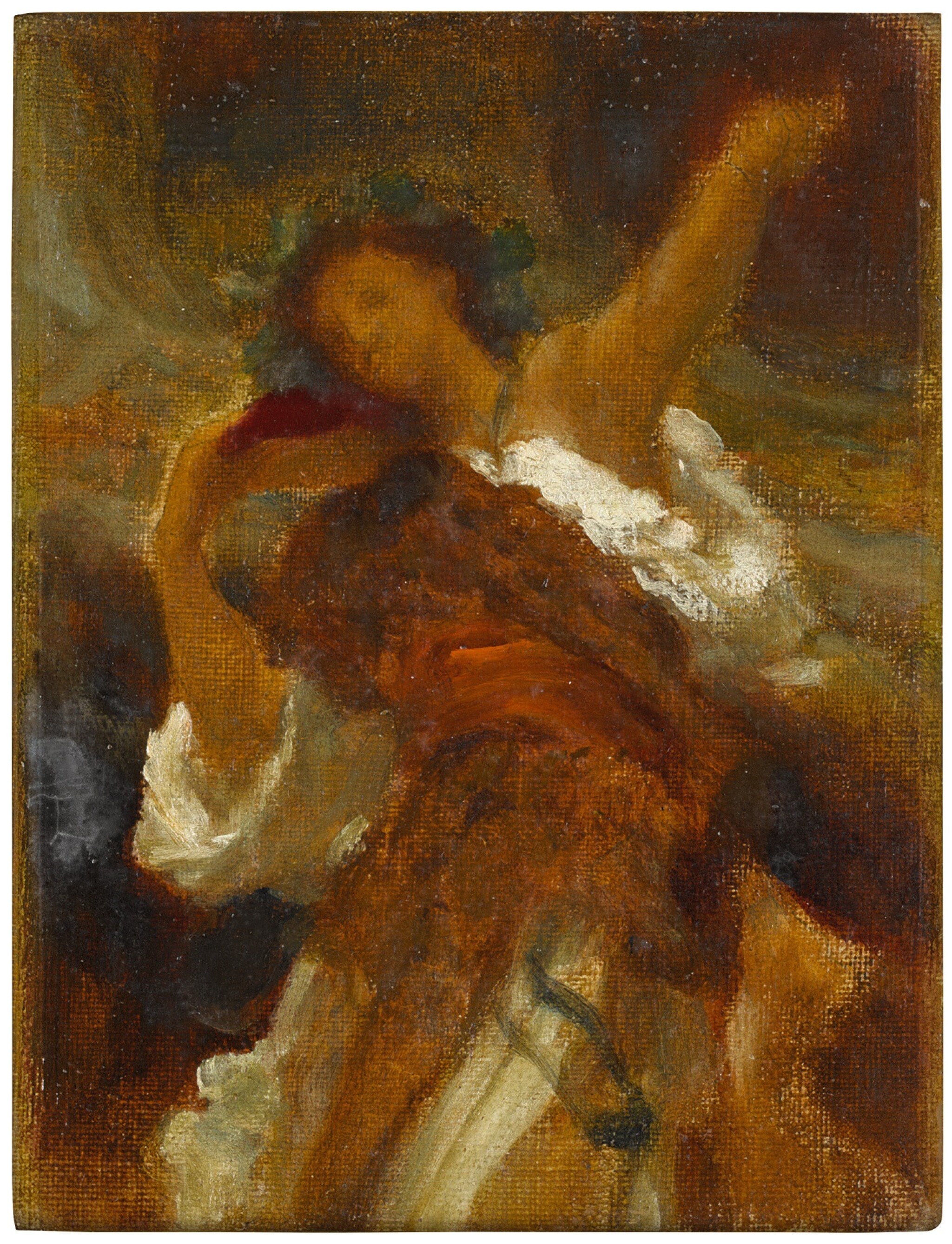 titled, signed and dated with a dedication from the artist on the stretcher: The Bacchante by Leighton 28 June 1893./ Present from Fred Leighton to J S Hodgson

oil on canvas, in original frame

The canvas is unlined and the work is in very good condition and ready to hang.

UNDER ULTRAVIOLET LIGHT There are no obvious signs of retouching.

The Bacchantes were the Greek equivalent of the Roman Maenads, the priestesses of the Wine God Bacchus whose sacred rites, the Bacchanalia, were celebrations of dancing, drinking and music in which the Bacchantes reached states of ecstasy where their souls were temporarily released from their bodies to commune with the gods. For the Dionysian revelry the priestesses bedecking their heads with vine leaves or ivy, clothed themselves in the pelts of wild cats or deerskin called nebris to cavort through the countryside accompanied by the sylvan gods. Their orgiastic festivities often reached a level where any man or beast who they encountered was in mortal danger, as demonstrated by the violent fate of the grieving musician Orpheus and the Theban king Pentheus. They were often depicted carrying a wand surmounted by a pinecone, a thyrsus which they used to protect themselves and playing auloi (double-shafted flutes), rattles and tambourines to awaken the gods from their slumber.

Leighton’s finished painting The Bacchante, exhibited at the Royal Academy in 1892 (Christie's, London, 31 May 2012, lot 21), is a dramatic and beautiful example of his voluptuous mature style when his art was at its most decorous and poetic. It depicts a smiling dark-haired girl dressed in a leopard-skin, with a wreath of vine-leaves in her hair and holding a tambourine, dancing through a forest accompanied by a doe. As an accomplished musician, Leighton was always fascinated by the subject of music and dance, painting two pictures of classical dancers early in his career; Salome Dancing (private collection, Japan) which was rejected by the Royal Academy Hanging Committee when Leighton submitted it to the summer exhibition in 1863, and Greek Girl Dancing c.1867 (private collection). In the early 1880s Leighton returned to the subject of dancers when he painted two vast decorations for James Stewart Hodgson, one of which depicted Dance (Leighton House, London) a male priest of Bacchus dancing for the Greek Goddess Terpsichore and a group of male and female youths. This figure is very similar in pose to that of the Bacchante in the present picture and may be the reason why Leighton gave this sketch to Stewart Hodgson in the summer of 1893.