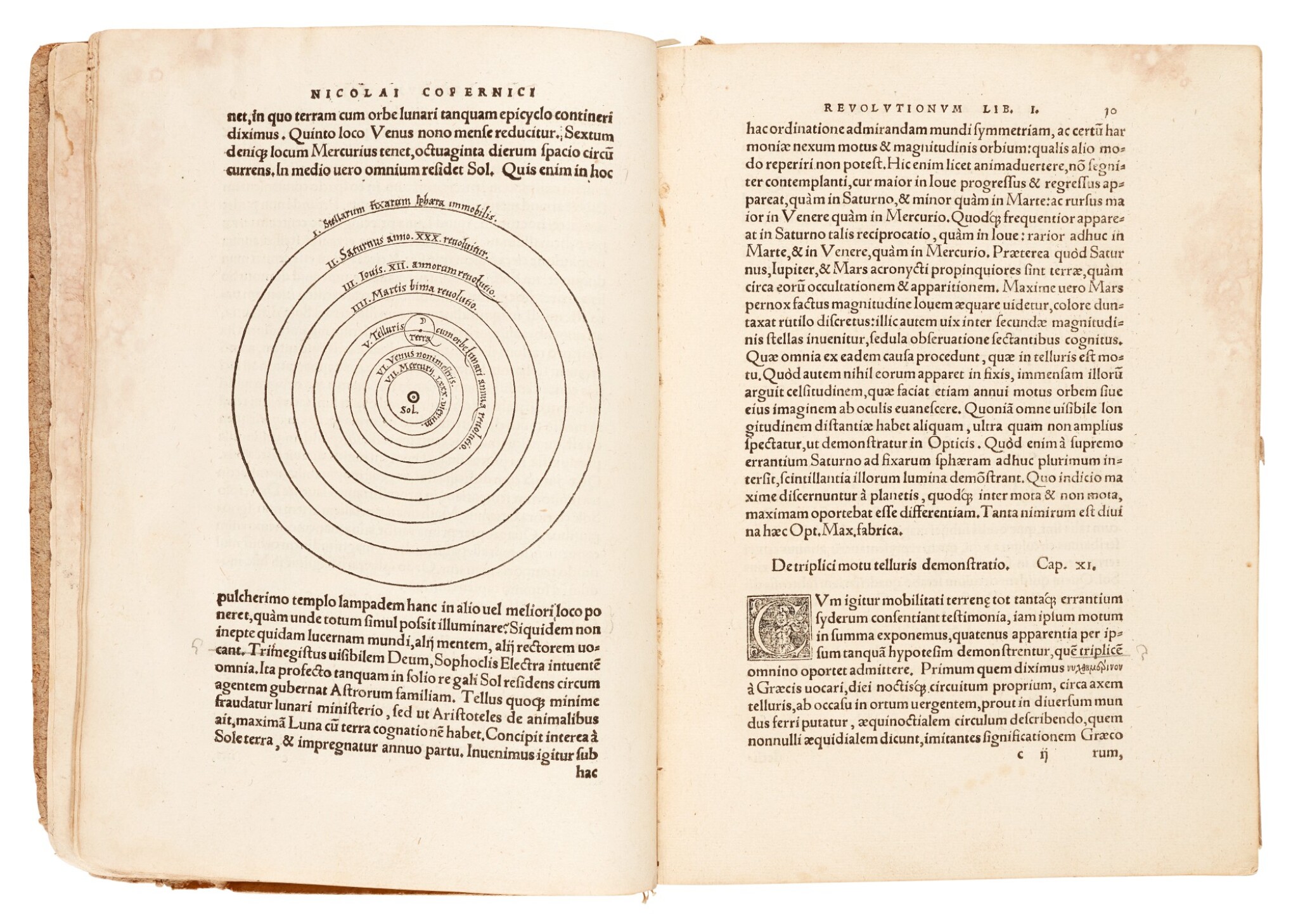 AN UNRECORDED COPY OF COPERNICUS: CRISP, UNWASHED AND UNSOPHISTICATED. A DUPLICATE FROM THE LIBRARY OF THE UNIVERSITY OF ROSTOCK.

THE CORNERSTONE OF MODERN ASTRONOMY, THE FIRST FULL EXPOSITION OF THE HELIOCENTRIC ARRANGEMENT OF THE PLANETS.

Copernicus had studied at the Jagiellonian University in Cracow which was one of the foremost universities at the time for the study of astronomy. He subsequently spent the years 1496-1503 in Italy, initially at the University of Bologna, lodging with the professor of astronomy Domenico Maria de Novara, and then at Ferrara and Padua. On his return to Poland, he was appointed a canon at the cathedral of Frombork, where he spent the rest of his life. The visit of a young scholar from Wittenberg, Georg Joachim Rheticus, was responsible for the eventual publication of Copernicus's manuscript on heliocentrism; the book was printed in Nuremberg only shortly before Copernicus's death at the age of 70.

Copernicus's book was predominantly a technical work concerned with how to calculate the movement of the planets, prefaced by a description of the cosmological arrangement of planets around the sun. As early as 1510 he had realised that there were problems with the Ptolemaic system centred on the Earth, as the orbits of the other planets did not match the theory; his ideas had circulated in a manuscript essay entitled Commentariolus, but he had no plans to publish his fuller workings, partly from fear of being scorned, until the arrival in Frombork of Rheticus.

Heliocentrism displaced God and the human race from the centre of the universe, much as Darwin's theory of evolution put man in his place among all the creatures of the earth, no longer kept aloof and special. Despite Galileo and Kepler's best efforts, heliocentrism was not accepted as accurate until the appearance of Newton's Principia in 1687 which finally completed the ideas that Copernicus had proposed.

This copy has the title words "orbium coelestium" crossed through in red crayon, which occurs in several copies; apparently these two words were added by Andreas Osiander, the anonymous author of the problematic preface claiming that the text was purely hypothetical, and were not used by Copernicus (see Gingerich, Census, p.xvii-xviii). Rheticus also used red crayon to cross these two words out in the copies that he presented to other scholars.

The missing quire has been replaced by four blank leaves with the same watermark as the endleaves (W in a circle with lettering).

VD16 K 2099; this copy not listed in Gingerich's census, though the other Rostock University Library copy is I.82

LIIb is the shelfmark used by Rostock for astronomy and astrology; this system of shelfmarks was introduced in the late nineteenth century.