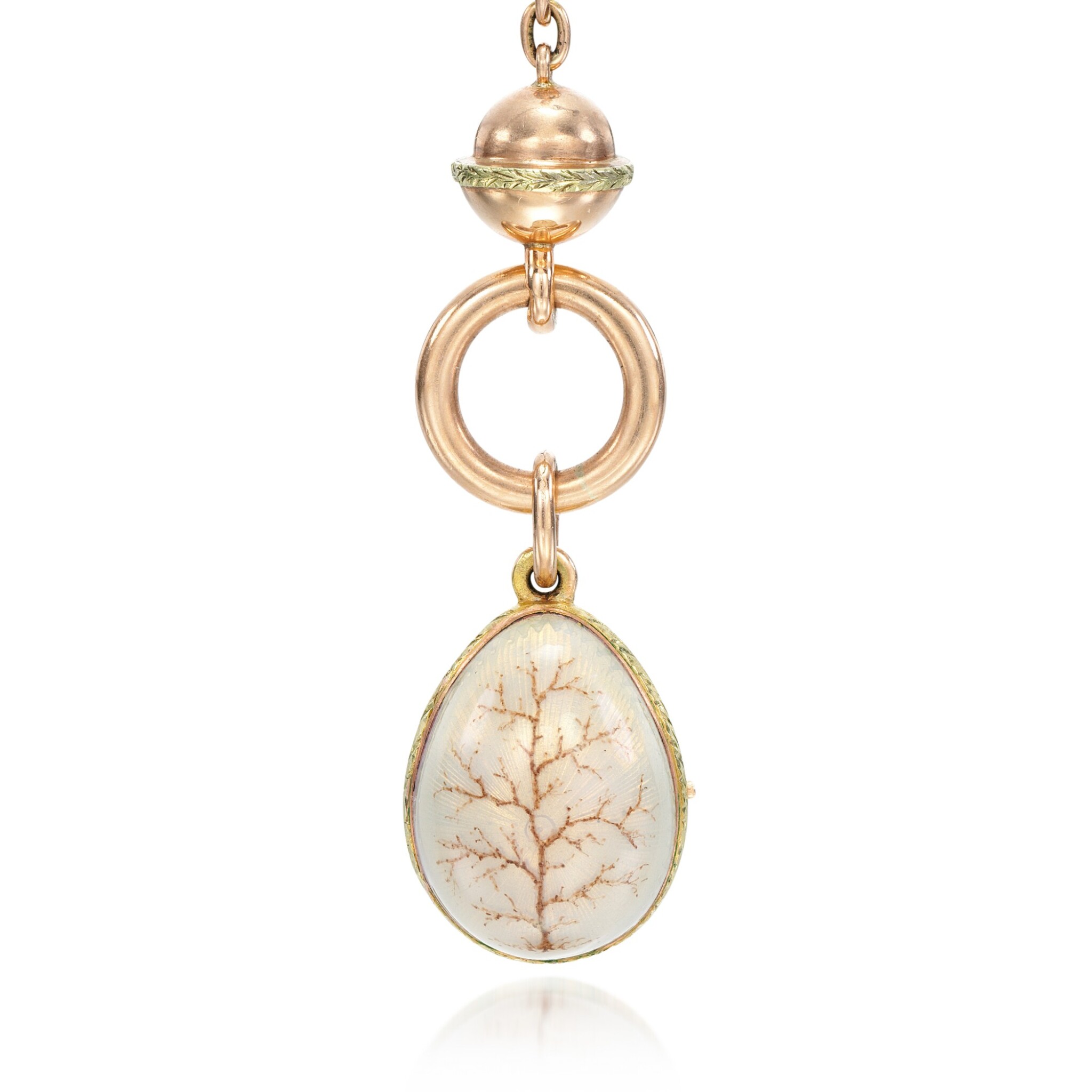 enamelled on both sides in translucent opalescent white over a sunburst engine-turned ground, simulating dendritic agate, the border chased as a yellow gold laurel wreath applied to a rose gold base, the pushpiece also rose gold; the two halves, opening to reveal two miniature gold apertures with glass panes, hinged at the loop attached to a varicoloured gold sphere and chain, struck to the loops and pin with workmaster's initials, 56 standard

From the Collection of HIH Grand Duchess Maria Pavlovna

This cigarette case forms part of the same inheritance as the historically important diamond and sapphire brooch and a pair ear clips, circa 1900, sold Sotheby's Geneva, 10 November 2021, lot 279 for 806,500 Swiss francs.

In 1917, the situation in the Caucuses became so bad that Maria Pavlovna put her affairs in order and made arrangements for her cigarette boxes and cufflinks in the Vladimir Palace to be taken to Swedish Legation in Petrograd (these quite remarkably were discovered, safe and sound, in the Swedish Foreign Office in Stockholm and were sold at Sotheby’s in London on 30th November 2009). She also made her own plans to leave Russia. The only route open to her was to make her way from the Caucasus to the White Russian stronghold at the Black Sea port of Novorossiysk, a journey of 800 kilometers through a war-torn country. Despite the deteriorating situation and the fact that it was late autumn it is reported that she set off in style for the fifty mile journey to the nearest railway situation in an open carriage with her maid of honor at her side.

The next first hand report of Grand Duchess Vladimir’s escape from Russia is by her niece Grand Duchess Olga Alexandrovna who also left her departure to the last minute. She was already at the Black Sea port of Novorossiysk which at the time was the principle center of Denekin’s White Army and waiting for a passage when she heard that her Aunt Michen, the formidable Grand Duchess Vladimir, had arrived after a harrowing escape from the Caucasus. She is quoted in her biography as recalling 'I went to see her. I was duchess. There had never been much love between Aunt Michen and my own family, but I felt proud of her. Disregarding peril and hardship, the stubbornly... had kept all the trimmings of bygone splendor and glory. And somehow carried it off. When even generals found themselves lucky to find a horse-cart and an old nag to bring them into safety, Aunt Michen made a long journey in her own train. It was battered all right – but it was hers. For the first time in my life I found it was a pleasure to kiss her'.

Even though the situation was very dangerous and time short it is said that the Grand Duchess, acting very much in character, is said to have refused passage on a ship which required a change at Istanbul as she could have had to submit to the ignominy of being deloused. Instead, she obtained a later passage in February 1920 and within a month of her departure Novorossiysk fell to the Bolsheviks. Her passage was on an Italian vessel and it is recorded at once again 'the good Stopford received us in Venice with money to pay for our passage'. From there she went to Switzerland and then to Paris.

On his return to England Albert Stopford put the jewels in a safety deposit box in a bank in London where they remained for rather more than two years by which time Maria Pavlovna had reached Europe. They then had discussions about who would provide the best professional advice. Cartier in Paris seemed to be the best choice as many of the jewels had come from them and they had offered to make no charge for the valuation. In mid-June 1920, Stopford received what was probably his last letter from 'his Grand Duchess' where she said that 'the offer is very tempting' but sadly in July her health had been severely affected by the ordeal of the previous four years and on 6th September she died. Her tomb is in the Russian Orthodox church Contrexéville in north eastern France which she had had build in memory of her husband in 1909.

The division of jewels therefore became the main matter for her will and the were placed in the hands of Cartier for valuation, reflected in the red case accompanying the present cigarette case.