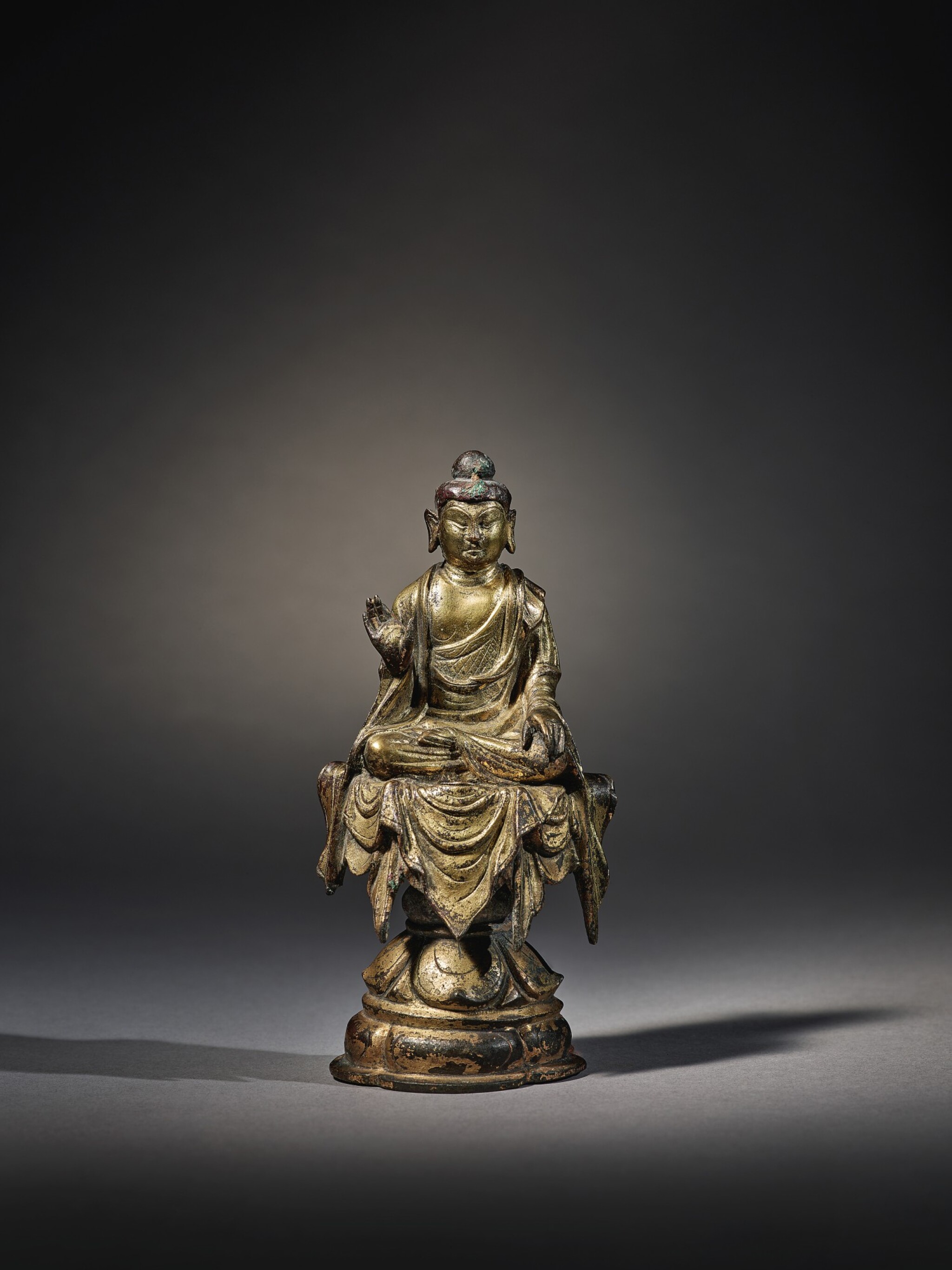 A gilt-bronze seated figure of Buddha

the finely cast figure depicting a Buddha, either Amitabha or Shakyamuni, seated in dhyanasana atop an intricate waisted plinth with peaked pendant lotus lappets swooping downwards, the downcast eyes and pursed lips create a stern yet meditative expression, the left hand rests on the corresponding knee, while the right hand is raised in vitarka mudra, a loosely-fitted rope drapes over the Buddha’s shoulders, plunging slightly to reveal the right chest, the face is enveloped by pendulous earlobes and a domed ushnisha

Good overall condition with just minor chips and breaks to the ends of the drapery. Other general surface wear and typical rubbing to the gilding,a nd the cold-painted base.

Beatrice Chan，〈Reflection and Enlightenment: Chinese Buddhist Gilt Bronzes from the Jane and Leopold Swergold Collection at the Museum of Fine Arts, Houston〉，《Arts of Asia》，2018年1至2月，頁58-65

The precise iconography of this intricately cast figure is unclear, as the mudra is indistinct, but it appears to depict either Amitabha or Shakyamuni Buddha. The high waisted plinth he is seated on is powerfully cast with peaked pendent lotus lappets swooping downwards.

Small votive images of the 'Teaching Buddha' were popular during the mid Tang dynasty. Compare a similar image of slightly larger proportions but similar mudra and treatment of the robes, formerly in the Nitta Collection and now in the collection of the National Palace Museum, Taipei, illustrated in The Crucible of Compassion and Wisdom, Taipei, 1987, pl. 76. A similar figure complete with foliate mandorla, which the present figure with its projecting rear tang would also have borne, is in the Asian Art Museum of San Francisco and is illustrated in Hai-Wai Yi-Chen. Chinese Art in Overseas Collections. Buddhist Sculpture, vol. 1, Taipei, 1986, pl. 81. Another similar but smaller figure was sold in our New York rooms, 22nd September 2004, lot 16.