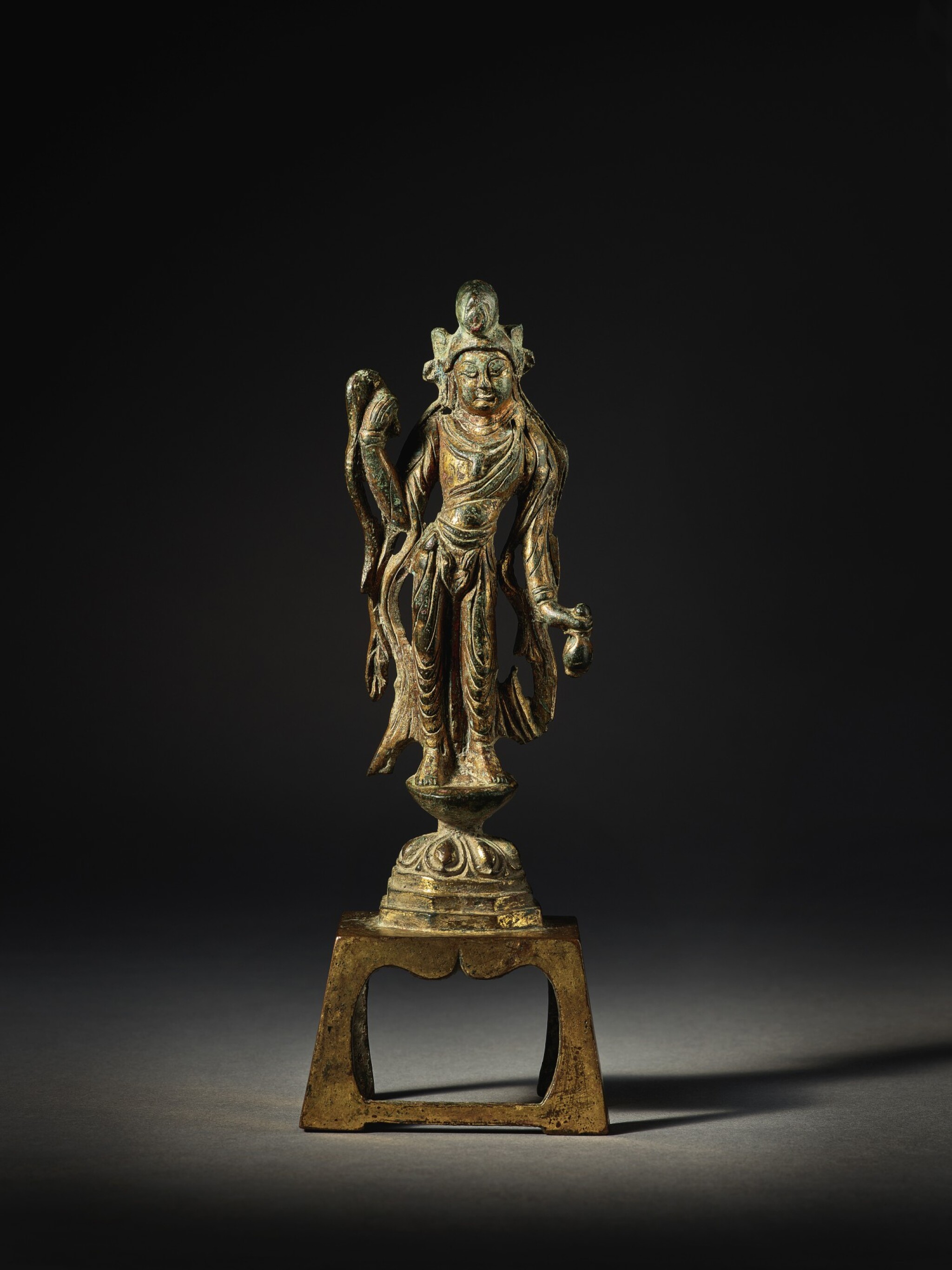 A gilt-bronze figure of Avalokiteshvara

finely cast in the form of the Bodhisattva standing in tribhanga atop a waisted lotus pedestal and stepped hexagonal base, all above a rectangular pedestal, the plump face and sidelong glance bearing a serene yet curious expression, the body adorned in a closely fitting dhoti, flaunting the curving form of the deity’s torso, achieving an almost dancelike movement, fluttering scarves outlining her swayed-hip posture, the right hand in an elevated position, the left hand holding a kundika

Good overall condition with just minor losses including the tips of the robes and two cracks to the left scarf, including a 0.2cm loss. There is typical oxidisation and rubbing to the gilding, and other general surface wear.

This elegant bodhisattva, depicted standing in tribhanga on a waisted lotus pedestal and stepped hexagonal base, is adorned in a long dhoti and fluttering scarves. The kundika in the left hand, and the willow branch in the right, identify the figure as the Bodhisattva Avalokiteshvara. The contours of the slender body are well defined in the contrapposto silhouette and the wet-drapery effect of the clothing, all of which are characteristic of Buddhist sculpture in the high Tang dynasty. The curving form of the deity’s torso achieves an almost dancelike movement. This highly recognizable stylistic element of the swayed-hip posture became especially popular during the reign of Emperor Xuanzong (712-756), when sculptures in general became more dynamic in their design.

A closely related figure, with hexagonal, rather than square, base and an inscription dated to AD 651, formerly in the Stoclet and Swergold collections, is illustrated in Osvald Siren, Chinese Sculpture from the Fifth to Fourteenth Centuries, New York, 1925, pl. 419B. Several figures in this posture bear images of Amitabha in the crown, while others bear only a main jewel in the tiara; although all appear to grasp the ambrosia-filled bottle, the waters of which will illuminate the laity with bodhi or awareness when sprinkled using a willow-leaf or a feathery fly-whisk.

Compare also one formerly in the Nitta Collection, now in the collection of the National Palace Museum, included in the Museum's exhibition The Crucible of Compassion and Wisdom, Taipei, 1987, pl.79, and another larger figure with similar tribhanga posture, ibid., pl. 81.