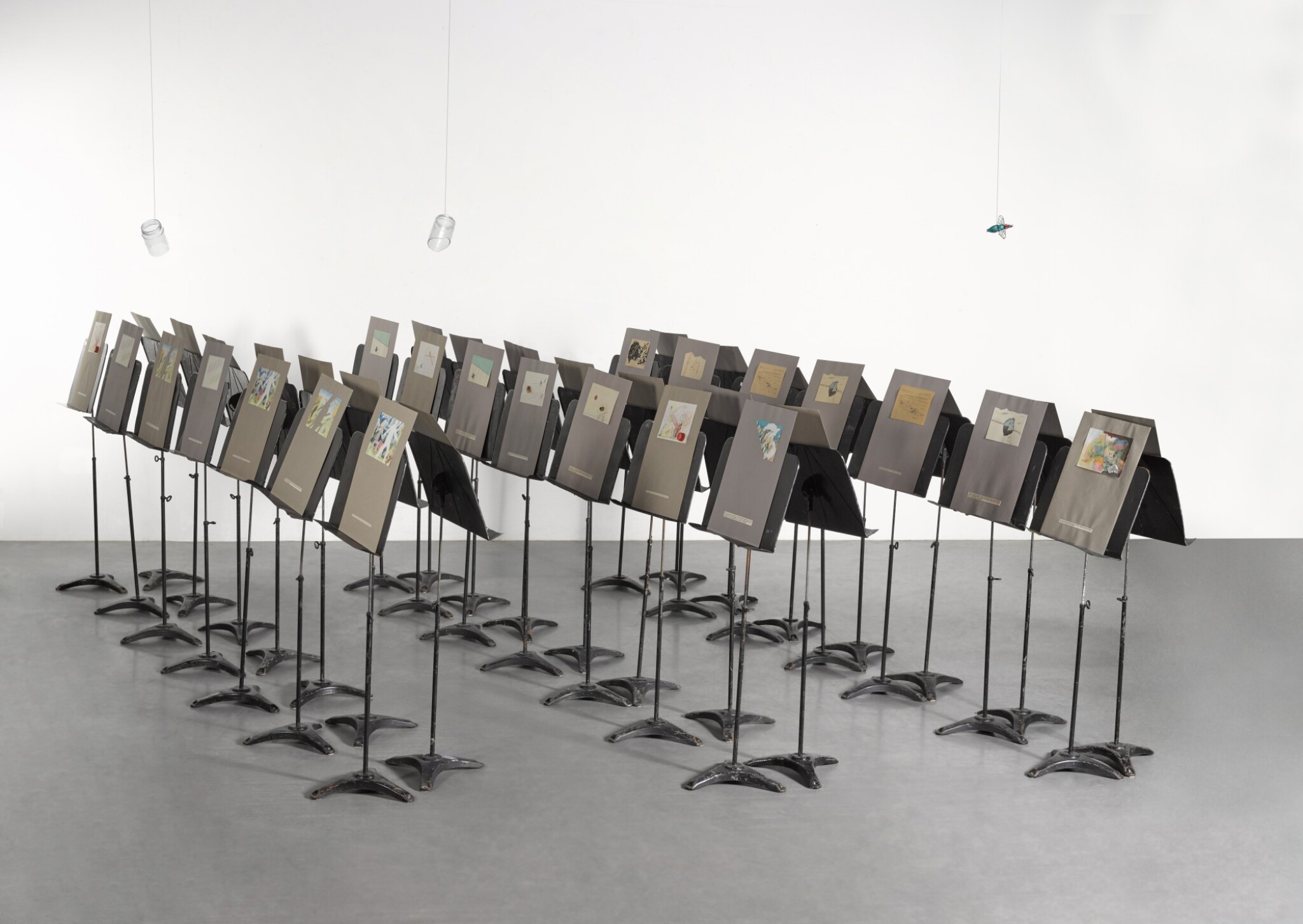 The work is accompanied by performance and set up instructions.

The installation includes two spare music stands. All stands show signs of wear, are slightly bent in places and have a layer of surface dirt. Each drawing is mounted and contains inscriptions on strips of paper attached at the bottom. Some of the sheets have discoloured and are delaminating slightly from their mounts. Some of the drawings include assemblage elements, which have become slightly detached. Some of the sheets also show very minor creasing, handling marks and adhesive staining. There is a large chip to the edge of one of the bottomless glass jars, which is possibly inherent.

With his definite move from Russia to the West during Perestroika, Ilya Kabakov also changed the focus of his artistic practice, moving from his albums of drawings informed by his official work as an illustrator, to large scale installations. His main theme, the experience of everyday life in the Soviet Union, continued to dominate his work. In the Ten Characters albums, Kabakov’s major series from the 1970s, the artist tells the stories of ten characters, all average Soviet citizens.

Kabakov’s Ten Characters installation, of which the present lot forms part, was his first large-scale installation which he exhibited in New York in 1988. The artist transformed two halls of the Ronald Feldman Gallery into two large communal apartments, a common form of living arrangement in the Soviet Union in which several families shared one large apartment, with each family occupying one room and sharing the kitchen and bathroom.

The installation transported the viewer into a dreary apartment with walls painted a bleak grey. Each room was dedicated to one character, each of them being obsessed with one unsual idea, a passion which consumes them. The composer, Vladimir Viktorovich Yevdokimov, is accused by fellow tenants of creating unbearable living conditions. Each Sunday, he would move music stands from his room to the communal hallway, arrange them in two rows, and place grey sheets of paper with drawings and texts on the stands.

In his statement to the court, Yevdokimov defends himself: ‘…I think to myself all the time that, indeed, our lives here are sufficiently difficult, but why does a person always have to be confined to those lowly banal things which surround him? Why can’t he open his soul to something exalted which would ennoble him and lift him up? In Moscow we do have special movie houses and concert halls for this, and everyday there are artistic performances. But our tenants never go anywhere. They are surrounded on all sides by a world of culture, yet they live locked inside with their petty concerns. Something has to be done here inside our apartment. Thus I devised musical concerts, which twice a month should take place within the confines of our apartment…” (Ilya Kabakov, The Composer, New York, 1988, pp. 5-6). This statement is key in understanding the vision of the artist as it is so acutely focused on the communal apartment both as place and as the stage for the inherent isolation that pushes the inhabitants into discourse solely centred on the banal.

The appearance of The Composer offers collectors a rare chance to acquire an early and important installation by the artist. Two other installations which formed part of Ten Characters, The Short Man and The Man Who Describes His Life Through Characters are in the Jane Voorhees Zimmerli Art Museum at Rutgers University.