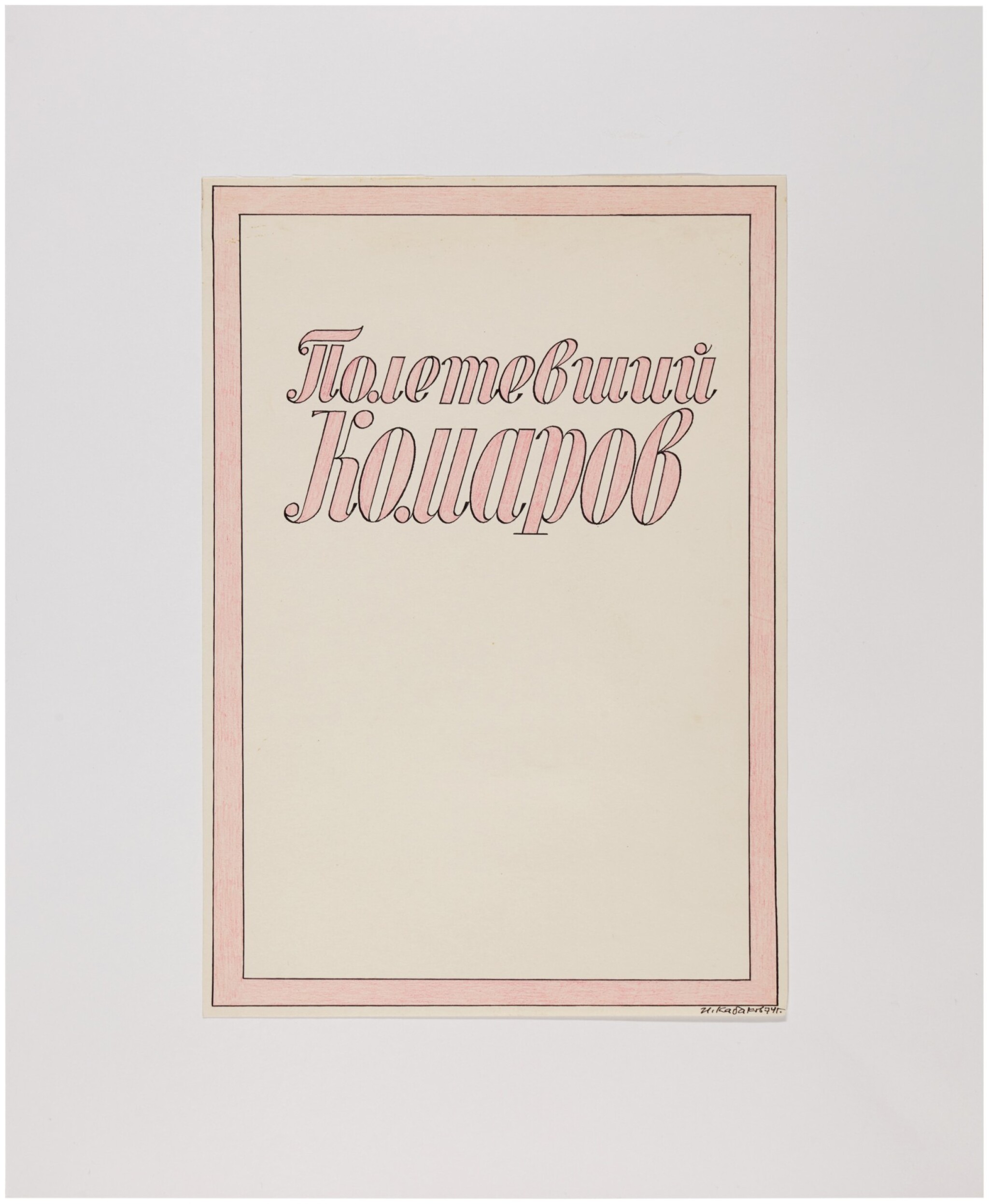 ten ink and coloured pencil on paper, the others watercolour and ink on paper

Each drawing is hinged to a mount at the top edge with Japan paper. The mounts are replacements and not the artist's original mounts. Paper labels with type written text are attached to twenty-two of the mounts. Sheets nos.2-4 show creases in the lower right and there is minor creasing to some of the other drawings. Very minor wear to the corners and edges is visible in places, most notably to the lower right corner of drawing no.32. There is minor paper skinning to some of the drawings, mostly on the reverse from previous mounting. The paper has discoloured slightly in line with age. There is very minor staining, handling marks and incipient foxing to some of the drawings. Held in a black folio box.

The Flying Komarov, Kabakov’s sixth album from the renowned Ten Characters series, embodies the artist's preoccupation with the quotidian. One day his characters step out of their houses and become airborne. They hover either so high above the ground that they nearly become invisible or descend towards the ground. Some clasp hands, others fly alone or in pairs, with everyday objects – tables, chairs, wardrobes, cups and saucers – levitating around them. As airplanes pass by, some characters manage to grab their wings and are transported far away. The main character climbs up the balcony railing, waves his arms and attempts to join his fellow citizens. With time, he notices that some are becoming increasingly transparent and eventually begin to dissolve into the atmosphere. The final page is blank.

A fictional narrator accompanies the images, offering a verbal commentary of each scene, which chronicles an inevitable end for the characters. Stylistically, the album passes through stages of realism and surrealism to the abstract, ultimately ending in silence. The final page arrives at the anticipated deafening whiteness of the blank page, destroying both the image as such and the story.

Born in 1933, Kabakov is best known for his conceptual installations. Prior to that he executed a vast body of albums which combine elements of literature, art and post-war Soviet popular culture. Straddling the domains of both official and unofficial Soviet art, Kabakov applied his background as a book illustrator to his albums. He approaches his subject matter with gentle humour and irony, mixing the absurd with the fanciful to reveal life’s contradictions. There is a tangible influence of Russian literature in Kabakov’s work, with his characters striving to elevate themselves above the mundane constraints of Soviet reality.

Kabakov began to develop his album genre in the early 1970s, which allowed the artist to introduce time, a fourth dimension, into his work. In espousing time, the album turns into an immersive experience for the viewer. Composed of similarly-sized sheets housed in folders, the artist would show his albums to small groups of four to ten people at a time. The viewer was to turn the pages one by one – an action that, as Kabakov envisioned, was to result in an experience comparable to that of viewing a theatrical performance.