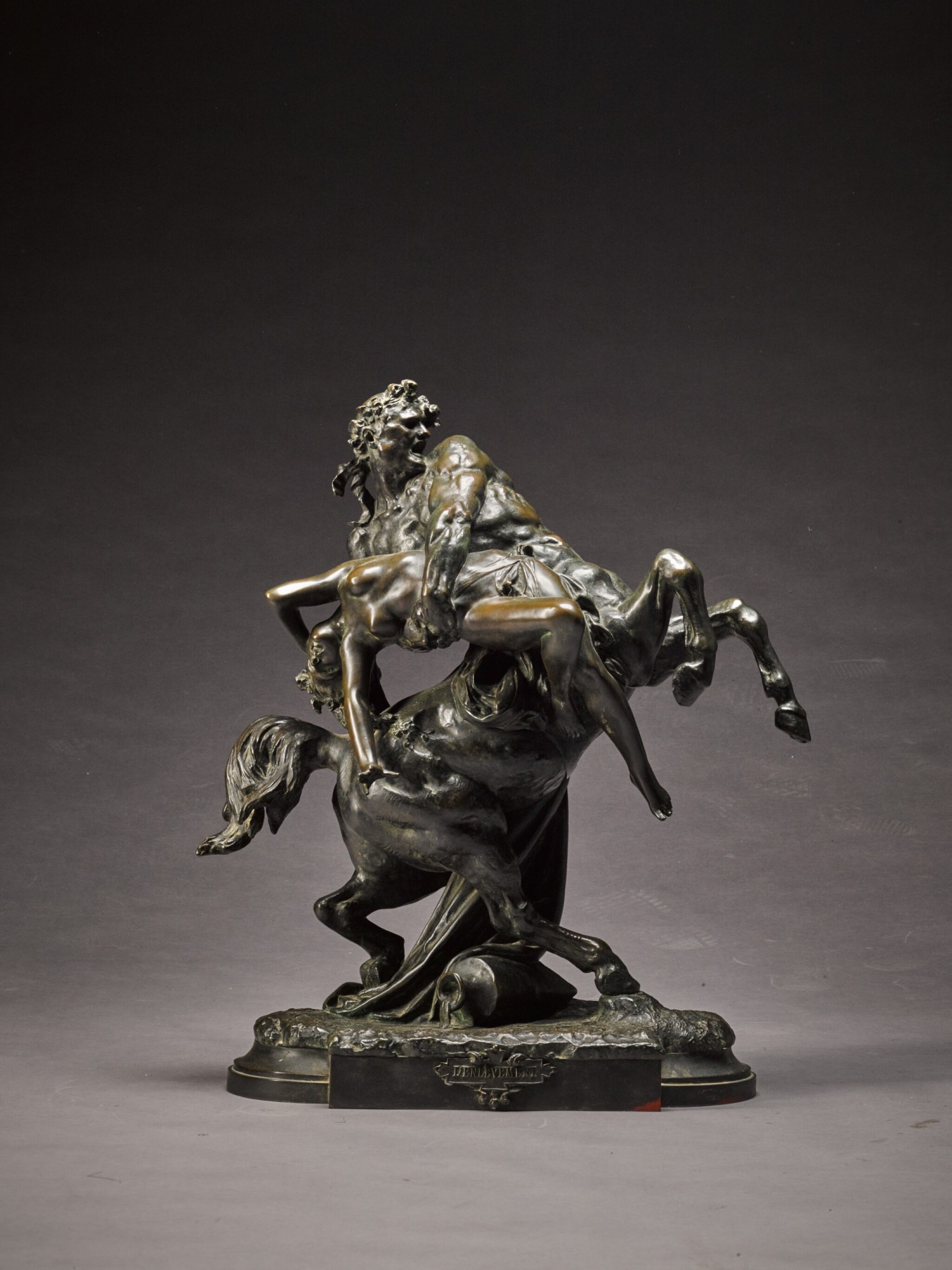 Overall the condition of the bronze is good with minor dirt and wear to the patina consistent with age. The bronze would benefit from a dusting and waxing. There are a few minor dirt residues including to the man's proper left shoulder. Minor red paint residues including to the edges of the moulded base. Some very minor wear to some high points. The bronze is cast in sections with some joints slightly visible including where the right back hoof meets the ground where there are minor original lacunae.

It has been justifiably suggested that this group owes much to the involvement of Auguste Rodin. It is first documented in 1871 when a terracotta version was included in a selection of models offered in Brussels in July of that year. Hargrove has demonstrated that the centaur's body which ripples with a bold musculature is characteristic of Rodin's models for the Vase of the Titans, and that the screaming face is very similar to Rodin's The Calls to Arms of 1878. The absence of specific reference to Rodin's part in the Enlèvement may be explained by the fact that his contribution would have occurred whilst he was still contractually working for Carrier-Belleuse's, although, by the early 1870s serious differences were already well apparent. Certainly, there are no obvious comparison in Carrier-Belleuse's oeuvre for the specific treatment of the centaur.

On the other hand, the ideal forms of Hippodamia are typical of so many Carrier-Belleuse mythological nudes. Also characteristic of him is the eclectic sources for the composition. It is certainly indebted to famous rape groups of the Renaissance, such as Giambologna's Nessus and Dejaneira and Rape of the Sabine, but the powerful pose of the centaur's body is close to Antoine-Louis Barye's Cheval surpris par un lion.

There are versions of L'Enlèvement recorded in terracotta, marble and bronze. Casts in bronze inscribed by the founder Pinedo were produced around 1896 (Sculpture Passion, op. cit., pp. 57-8, no. 79). The present version bears the 'pastille' Bronze Garanti au Titre, which may indicate that it post-dates the Pinedo edition.

This dynamic sculptural group depicts a famous scene drawn from Ovid. Pirithous, King of the Lapiths, invited the centaurs to celebrate his marriage to the beautiful Hippodamia. The drunken centaurs became out of control and the centaur Eurityon tried in vain to abduct Hippodamia. King Pirithous assisted by Theseus, later took revenge on the centaurs in a battle known as the Centauromachy, a scene depicted throughout art history, from the Parthenon to Piero di Cosimo and Peter Paul Rubens.