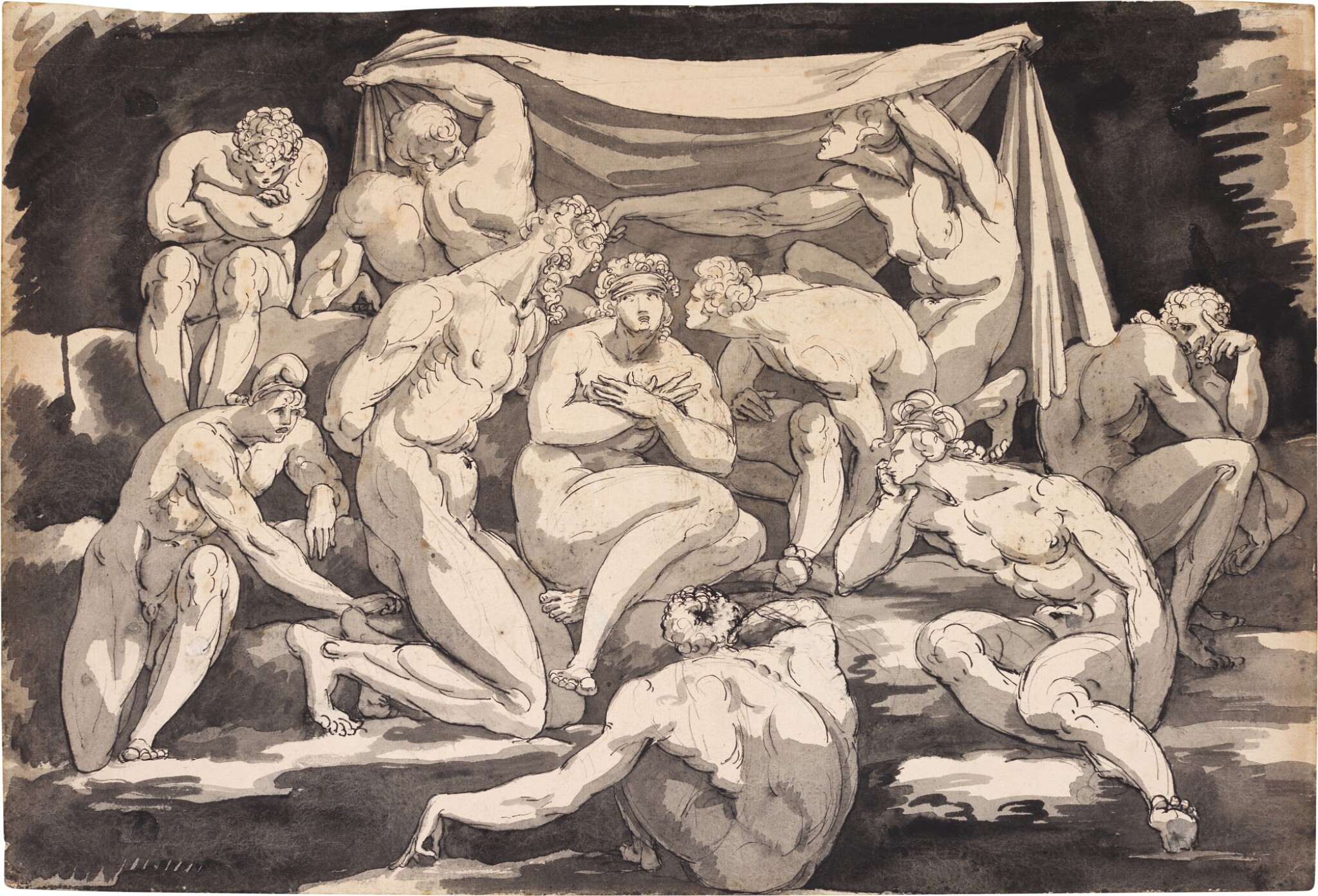 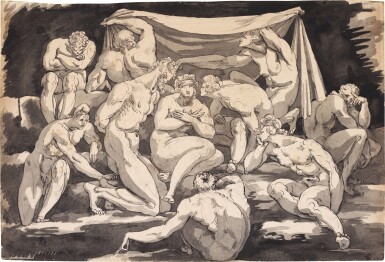 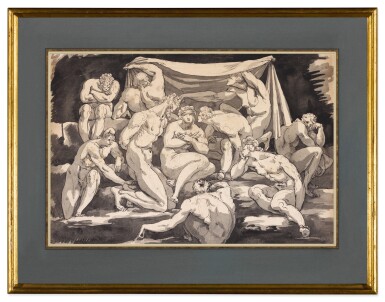 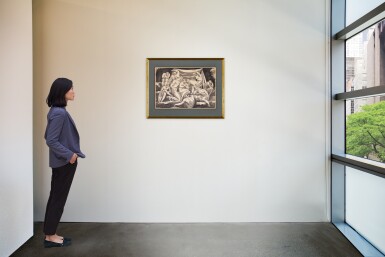 Black and gray ink with washes on laid paper;

The medium is very rich and strong. The paper has largely remained true to its original color, although there is some darkening to the extreme upper left and right edges and there is some minor foxing visible throughout. On the shoulder and head of the crouching figure in the foreground there is evidence of minor rubbing. There are three 'patched' areas, where the paper is at its thinnest, but these may well be contemporary with the creation of the work. In any case they do not disrupt the power of this extraordinary image. The work is not laid down.

We are grateful to Malcolm Rogers for suggesting that the ‘Master of the Giants’, in his opinion, is likely to be John Cartwright (fl. 1767-1808), an artist with whom Fuseli shared a house in St Martin’s Lane, London in 1779, the year of the Master album. The likely portrait of Cartwright by Fuseli in the National Portrait Gallery (which Mr Rogers tentatively identified as him in the 1980s) suggests an intimate friendship, and the sketchbook on the table before him suggests that they may have drawn/worked together. Please see the following link for the portrait: https://www.npg.org.uk/collections/search/portraitExtended/mw02376

London, Rowland, Browse and Dalbanco, The Master of the Giants, 1949 (unnumbered)

This grand and dramatic drawing once formed part of an album that was rediscovered in the 1940s and was the subject of an exhibition held in 1949 at the London galleries of Rowland, Browse and Dalbanco. The group contained some forty works and while half were drawn on a similar scale to the present lot, the remainder were smaller. Some of the drawings were dated June or July 1779 but none were signed.

Given the clear influence of Michelangelo, classical sculpture and Italian prints, scholars agreed that the works had been made in Rome and were by an artist operating within the circle of the Swiss painter Henry Fuseli. Rowland, Browse and Dalbanco named the unknown figure ‘The Master of the Giants’ and debate as to the true identity of the artist has simmered away ever since.

In the 1950s the collector Leonard Duke and the leading expert on Fuseli, Frederick Antal, suggested that Prince Hoare (1755-1834), could have been responsible for the drawings. Hoare was the second son of the pastellist William Hoare of Bath and he lived in Rome between 1776 and 1799. While in Italy he immersed himself in the artistic community and is recorded as striking up friendships with Henry Fuseli, William Pars, Alaxander Day, James Nevay and James Northcote.

An alternative attribution was presented by Nancy Pressly in her 1977 Burlington Magazine article.1 Citing a signed drawing in the collection of Maidstone Library and a group of unsigned sheets at the Royal Academy, London, she confidently assigned the group to the history painter James Jefferys (1751-1784), who was also in Rome over the same period (in his case 1775 to circa 1781) thanks to a scholarship from the Dilettanti Society.

In recent years the highly respected dealing firm Lowell Libson and Jonny Yarker Ltd. have handled several works from the album. They have sided with Duke and Antal and have suggested that Prince Hoare is the more likely candidate.