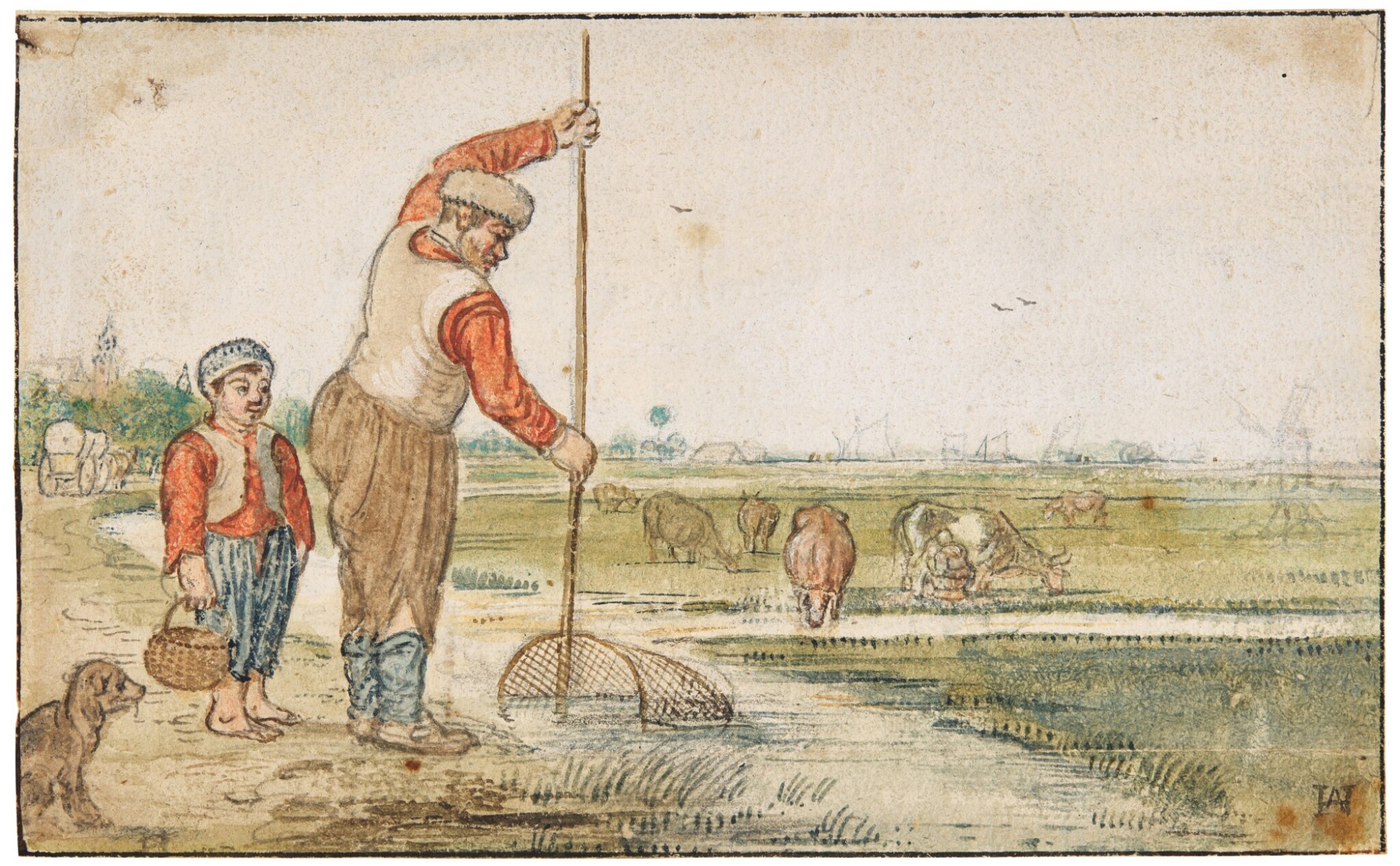 with the numberings of Röver and Goll van Franckenstein (see provenance) and a further early numbering in brown ink, verso: 500

Hinged to mount at top. Remains of previous hinges alng top edge, verso. Some light staining in the corners, and small repaired tear, top left corner, from previous mounting. A little light foxing and surface dirt elsewhere. Horizontal crease towards bottom edge. Slight abrasion along the line of this crease, and towards bottom right. Overall condition none the less good and fresh - colours very good and strong.

Although Hendrick Avercamp is perhaps best known for his ice scenes, his depictions of balmier times of the year are also extremely attractive and atmospheric. As we see in this fine example of one of his finished works in watercolor and gouache, these spring and summer landscapes typically show serene scenes with rural folk quietly going about their daily activities on the margins of the canals, rivers and estuaries that define the Dutch landscape. Here, a man fishes with a large net in a narrow stream, his son and dog watching patiently alongside him, while in the background a milkmaid attends to a cow, and to the left a waggon approaches a village.

In fact, Avercamp's drawings are very rare: fewer than 200 survive, nearly one third of those in the Royal Collection at Windsor Castle, and just three other substantial drawings by the artist have been sold at auction in the last quarter century.1 Marijn Schapelhouman, writing in the 2009-10 Amsterdam and Washington exhibition catalogue, gives a detailed description of the different types of drawings that he made, which range from rapidly sketched studies of single figures to highly finished watercolor compositions, some of them preparatory studies for prints.2 These watercolors, which are generally signed, like this one, with the artist’s monogram, were surely made as finished works, for sale to collectors.

The striking – and charming – motif of a man patiently fishing with a large, hand-held net, watched by his son and dog, is also seen in one of Avercamp’s greatest watercolours, in the Abrams collection, though there in the context of a more complex composition, and a more specific view (identified on the print that Simon Fokke made after the drawing as Ouderkerk aan den Amstel).3 A similar fisherman also features in a much simpler drawing of two figures on the ice near Kampen, which is part of the great group of Avercamp’s drawings in the Royal Collection.4

The provenance of this rare watercolor by Avercamp reflects its significance and appeal: over the course of the last three centuries, it has passed through at least three of the most important collections of Dutch drawings: those of Valerius Röver, Johann Goll van Franckenstein, and, more recently, Cornelis Hofstede de Groot. Like so many of the finest drawings produced in 17th-century Holland, it seems at first sight so very simple and unassuming, but by combining down-to-earth directness with subtly refined technique and atmosphere, it encapsulates the very essence of Dutch rural life, and early 17th-century Dutch landscape drawing.