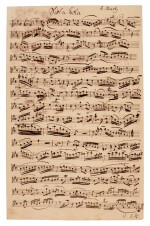 Manuscript of the aria 'Es ist vollbracht' from the "St. John Passion", BWV 245, with a modernized version of the viola obbligato, c. 1800

comprising two separate manuscripts for a chamber music arrangement of the aria:

1) a performing part for "Viola Solo", ascribed to "S. Bach", written in an extrovert style with many differences from the familiar version for viola da gamba, including a brief cadenza, the outer sections notated in alla breve time, in an accomplished scribal hand, in dark brown ink on sixteen and nine staves per page, 2 pages, folio (c. 32 x 20.5cm), 16-stave paper, ruled with a single-stave rastrum, crowned post horn watermark and "4" (countermarked "S & C") [cf. Heawood 2714-2728 or Churchill 317-318], no place or date, but probably late eighteenth century

2) the corresponding performing part for voice and accompaniment ("Singstimme"/ "Begleitung"), in a different hand, titled "Aria" and "J:S: Bach", notated in brown ink on up to six two-stave systems per page, including a cue for the viola cadenza, the opening and closing adagio sections notated in alla breve time, 3 pages, 37.2 x 23cm, 12-stave paper, ruled with a single-stave rastrum, watermarks: indistinct maker's name, no place or date

This is a remarkable and unknown arrangement of a celebrated aria from one of Bach's towering masterpieces, the Johannespassion, first performed in Leipzig in 1724 and revised by him on three or four occasions before his death in 1750. This arrangement excludes the accompaniment by violins and violas in the central vivace section. A precise dating for this arrangement is not certain--the viola part is a fair copy and may be the earlier of the two manuscripts--but in any event both predate the publication of the music. Although a few chorales from the St. John Passion were published in eighteenth-century collections, the arias did not appear until the first edition of the full score in 1830. This hitherto unknown arrangement is a new source for the Rezeptionsgeschichte of Bach's work, dating from before the early nineteenth-century Bach Revival.

This part for viola solo is more extrovert than Bach's famous obbligato for viola da gamba, and indeed now dominates the whole piece. However, it retains the harmonic richness and many of the expressive appoggiaturas found in the original. In both playing parts, the opening and closing adagio sections are notated in doubled note-values with respect to Bach's original, so that each bar is now represented by two bars. In the vivace middle section, the solo viola plays a dramatic opening flourish, but thereafter follows Bach's viola ripieno part (including the trills marked there), instead of doubling the bass part.

The following divergences from Bach's original version may also be noted: the outer sections of the aria are marked alla breve in both playing parts (as opposed to common time); the voice part in the middle section is somewhat simplified by the elimination of the semiquaver passages (complementing the trills in the viola); the new viola cadenza is also notated in the accompaniment.

From the collection of Ernst Rudorff (1840-1916), possibly inherited from his mother Betty Pistor, the daughter of Carl Pistor.