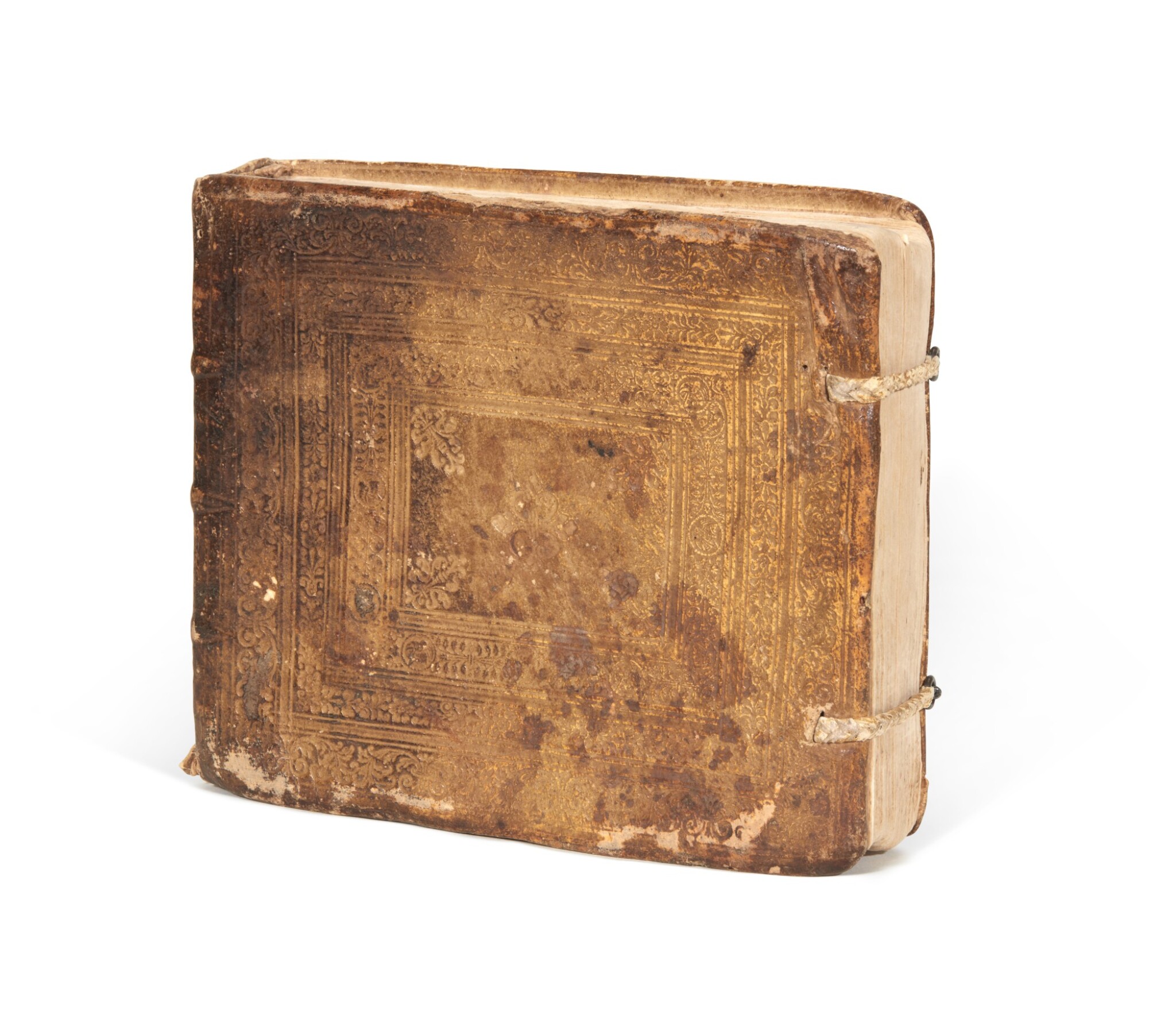 Highly important early seventeenth-century manuscript of Italian and French lute music in French tablature, comprising some 320 pieces, INCLUDING THE LACHRIMAE PAVAN, JOHN DOWLAND'S MOST FAMOUS COMPOSITION AND THE MOST POPULAR PIECE OF MUSIC IN THE WHOLE OF THE FIRST HALF OF THE SEVENTEENTH CENTURY

ONE OF THE MOST IMPORTANT LUTE MANUSCRIPTS OF THE SEVENTEENTH CENTURY.

IT IS ALSO ONE OF THE MOST SUBSTANTIAL OF ALL EXISTING LUTE MANUSCRIPTS AND THE MOST SIGNIFICANT TO BE OFFERED AT AUCTION IN MODERN TIMES.

NOT ONLY INCLUDING 89 PIECES UNIQUE TO THIS SOURCE, IT ALSO CONTAINS A VERSION OF THE MOST POPULAR PIECE OF MUSIC WRITTEN BETWEEN 1597 and 1650: DOWLAND'S LACHRIMAE PAVAN.

This spectacular manuscript, UNPUBLISHED IN ITS ENTIRETY, and probably Bavarian in origin, is written by the same scribe who wrote the lute book of Joannes Aegidius Berner von Rettenwert (1603-1663), a volume copied in Salzburg c.1623-1627 (and preserved now in Prague, Národní Muzeum - České Muzeum hudby: MS G.IV.18) that exhibits a considerable overlap in repertoire with the present manuscript (90 of the Dolmetsch manuscript's pieces are transmitted in the Prague source). Given that the ownership signature in the Prague volume appears to match the musical hand there, it is possible that the scribe in both manuscripts, whose hand is fluent and bears witness to evident musical training, was one and the same as Joannes Berner himself - one of whose residences, from 1643 on, was Schloss Anif, outside Salzburg. According to Suzanne Bloch, Dolmetsch himself considered that the volume had belonged to a nobleman 'whose secretary was of Italian background because in the copying of all the popular lute pieces in French tablature, he would revert at times to Italian script' (in an article published in 1904, Dolmetsch referred to the manuscript as 'a French MS., about 1600').

The treasure-house of music represented here, which in size dwarfs collections in the majority of lute manuscripts, comes from the transitional period between the stylistic epochs of the Renaissance and Baroque. There are many highlights in a volume which preserves no fewer than 320 pieces by some 26 identified composers. One composer of particular interest is the lutenist Michelangelo Galilei (1575-1631), son of the theorist and lutenist Vincenzo Galilei and brother of Galileo, who was active in Munich onwards from 1607, when he entered the service of the Elector of Bavaria, Maximilian I, working at the Munich Hofkapelle: he is the named composer of ten pieces in the volume (on fols.108v, 109r, 113v-114r, 151v-152v, 195v-196r, 203v-204r, 239v-240r, 280v-281r), and a few others can be assigned to him on the basis of concordances elsewhere. But undoubtedly the jewel of the manuscript, is Dowland's Lachrimae pavan (fols.225v-227v), one of two pieces by the great English lutenist found here (the other is the galliard on fols.92v-93r, his so-called 'Pipers Galliard'). Dowland's famous lute pavan, written in 1596, to which lyrics were later added ("Flow, my tears"), survives in over 100 manuscript and printed sources across Europe, testifying to its extraordinary popularity in the period up to fifty years after its composition. The intriguing version transmitted by the present manuscript is, as noted by the doyenne of lute studies, Diana Poulton, a highly simplified version. So popular did the lute song (or ayre) version become that Dowland would occasionally sign his name "Jo: dolandi de Lachrimae".

The collection is markedly influenced by the French style brisé (the performance convention whereby in many passages the notes of the treble and bass, for instance, were sounded successively, beginning with the bass), and includes a large number of courantes and voltes, the most common dance types of the period. French tablature is employed throughout with the exception of one sarabande (fol.56v), one courante (fols.249v-250r) and two other pieces (the courantes on fols.249ff. and fols.267vff.), which start in Italian tablature and then revert to French. So-called Renaissance tuning is required throughout, with the exception of a handful of numbers, including nos.315-319, 321 and 322, which employ the cordes avallées tuning as found in the Thesaurus Harmonicus (1603) of Jean-Baptiste Besard. The number of courses employed ranges from six to ten; in a couple of cases the tenth course is lowered to B♭.

Arnold Dolmetsch was of course inextricably linked with the lute, in reality as well as in the popular imagination, making his first instrument in 1893. Several instruments by him survive, including the ones he made for Diana Poulton.

We are pleased to acknowledge the kind assistance of John H. Robinson and Professor Tim Crawford in our cataloguing of this lot.