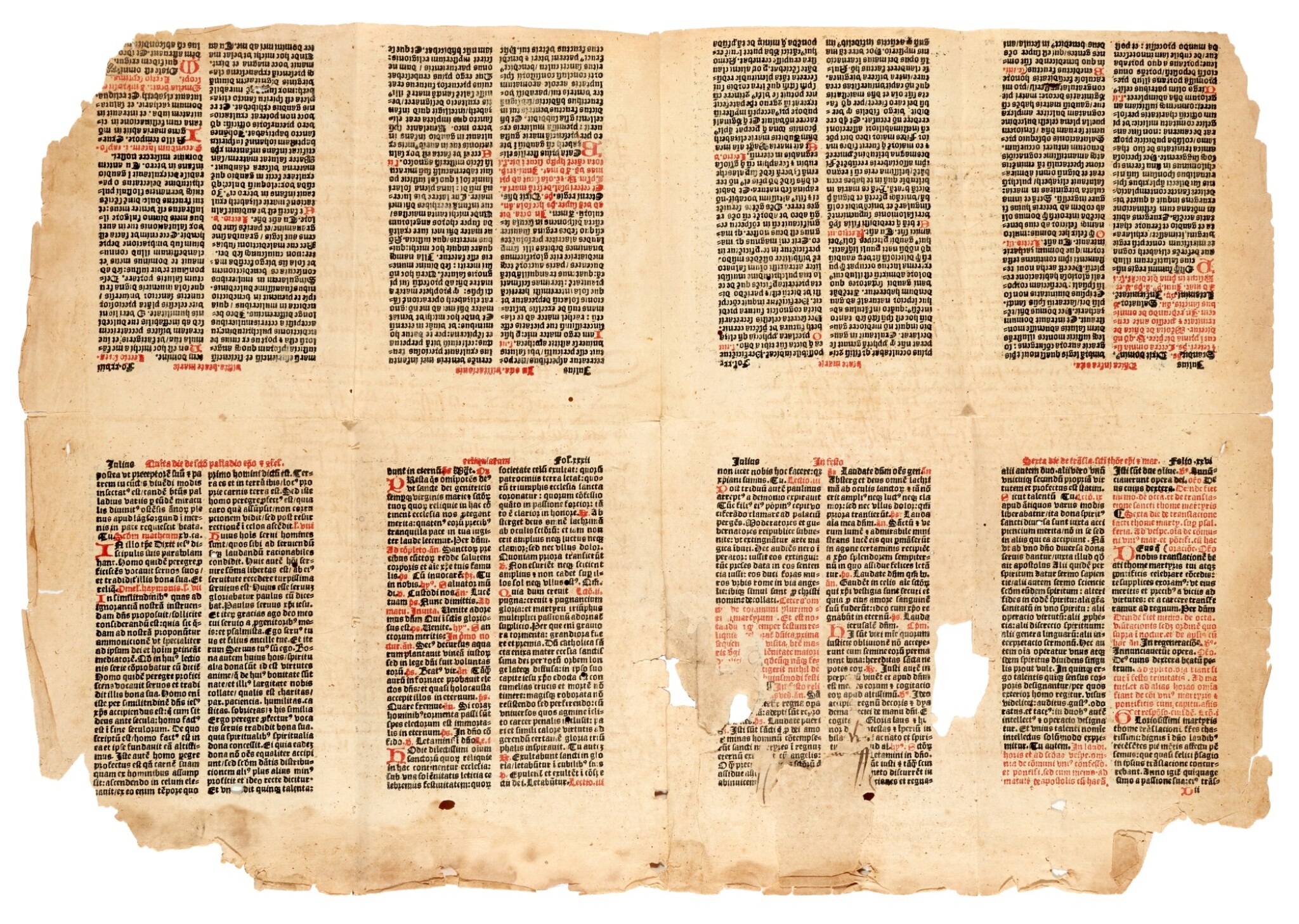 A volume containing numerous printed and manuscript liturgical fragments, collected by Weale and with his autograph notes, including 8 leaves from THE ABERDEEN BREVIARY

folio (338 x 265mm.), with the fragments tipped in on fabric guards, including 8 conjoint leaves from the Aberdeen Breviary [Edinburgh, 1509], and several leaves from breviaries of Swedish uses, crimson buckram binding, many of the fragments with defects and glue stains, upper joint fraying

﻿A FASCINATING COLLECTION OF LITURGICAL FRAGMENTS, both printed and manuscript, collected by the noted art and book historian William Weale (1832-1917), who converted to Catholicism under the influence of the Oxford Movement and became keeper of the National Art Library in 1890. He was also the author of the Catalogus Missalium ritus Latini (London: Quaritch, 1886; revised in 1928), the standard reference work on missals, arranged by use and order.

Some of the fragments show clear signs of having been removed from old bindings, which were an area examined by Weale while at the National Art Library and at the British Museum; he produced several volumes of rubbings from historical bindings. Most of the fragments were printed in red and black, as usual for liturgical works.

The first printers in Scotland were Andrew Myllar and Walter Chepman, who were granted a privilege by James IV in 1507. The Aberdeen Breviary was commissioned by James and prepared by James Elphinstone, bishop of Aberdeen, and Hector Boece, as a Scottish alternative to liturgical books of Sarum use, though this was the only edition printed. It survives in a handful of fragmentary copies.

4. 2 uncut sheets containing 3 and 6 leaves respectively, from a 16mo edition

5. Breviarium. Use of Cologne (Coloniense). Five fragments tipped into the same page, from three different editions, all found in an early sixteenth-century Cologne binding

9. Breviarium Romanum. [Venice: Nicolaus Jenson, 1478]. ISTC ib01112000. folio, leaf kk3, PRINTED ON VELLUM; there is a note with this stating that Weale's own defective copy (presumably now lacking this leaf) was sold to the National Art Library

14. Missal. Use of Rome. [Venice: Lucantonio Giunta, late fifteenth or early sixteenth-century], folio, 20 fragments pasted to 10 sheets, some with woodcuts, some staining and defects

17. Missal. folio, manuscript on paper, one leaf, containing part of the feast of the Holy Spirit

19. Votive masses for the Five Wounds, the Compassion of the Virgin, etc., manuscript on paper [France, 16th century], 4 ff. containing 5pp. of text

20. Veni sancte spiritus, from a Missal, manuscript on paper, 11 lines of text

24. Breviarium. [Paris, early sixteenth century], 6 leaves and an uncut sheet containg 3 leaves (the uncut sheet bound after no. 25) from a 16mo edition

26. Small printed fragment on vellum from a book of hours, containing part of leaf b3

27. Sequentiary, an incomplete vellum leaf with sequences for Christmas, Epiphany, Purification, and Easter, all or part of 23 lines, with interlinear stave-less neumes [Netherlands or Germany, 13th century]

many of the fragments with defects, wormholes and glue stains, upper joint fraying, a fragment removed at no. 22