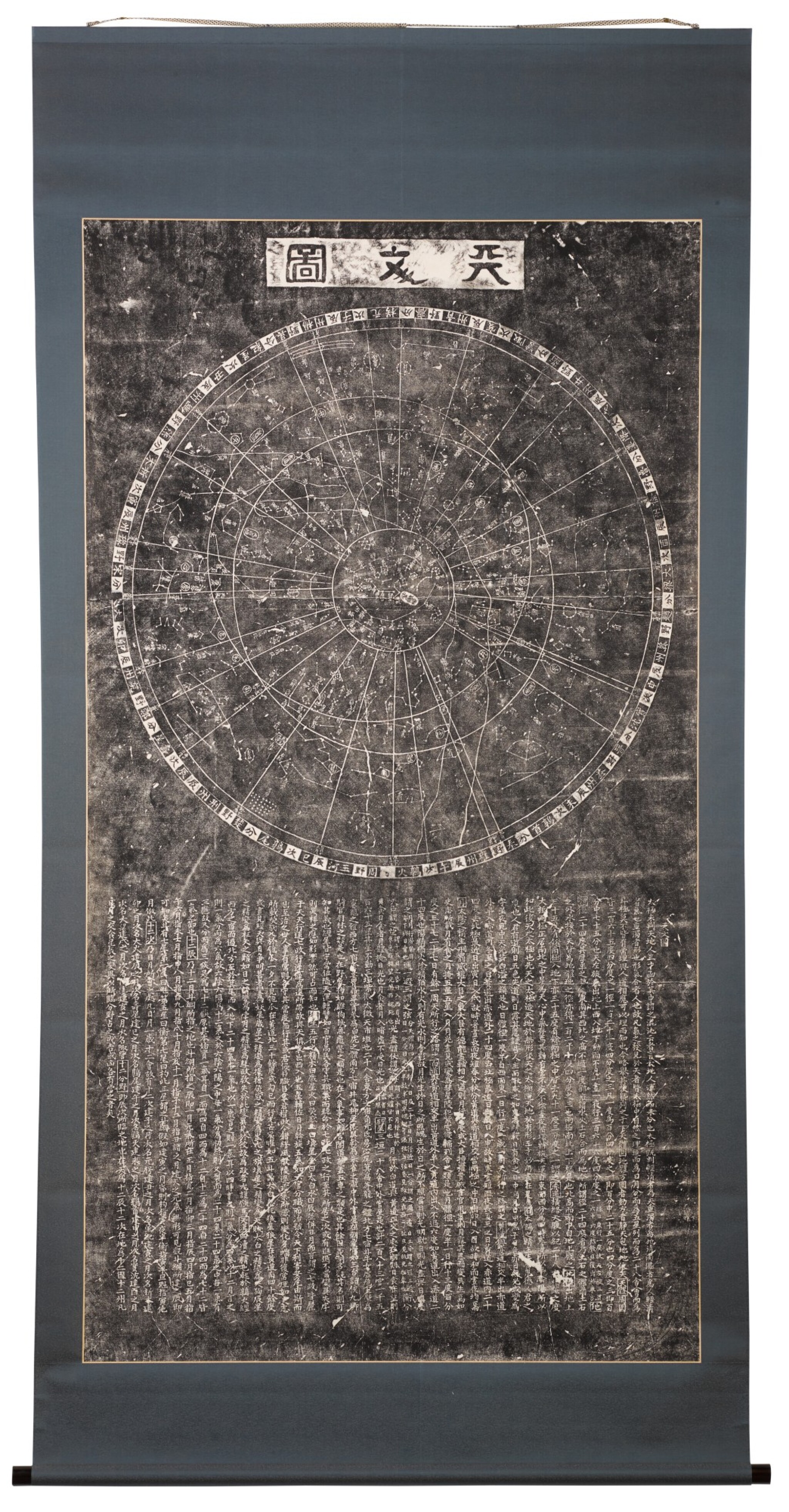 A RARE RUBBING OF A THIRTEENTH CENTURY ASTRONOMICAL STELE from the Suzhou Confucian temple, Kiangsu, China.

The chart was drawn by the Confucian polymath and scholar Huang Shang in about 1190 during the Southern Song Dynasty when he was tutor to Emperor Guangzong’s son. This original chart is lost, but it was engraved on stone in 1247 by Wang Zhiyan, and it is from this stele that the present rubbing is taken.

The stele is now located in the Purple Mountain Observatory in Nanjing. Rubbings of the stele – with their characteristic white-on-black appearance – are rare. The earliest appear to have been made as early as the fifteenth to seventeenth century. Rubbings are also known from the nineteenth century (most likely the period of the current example), and ten rubbings were made in the 1990s for presentation to museums, including the History of Chinese Science and Culture Foundation in London, whose website says that their example “is believed to be the only original rubbing… in the West” (https://chinesehsc.org/chinese_astronomy.shtml). Rubbings are no longer made for reasons of conservation.

Richard Stevenson describes the scope of the chart as follows

“The Suzhou planisphere portrays the whole of the sky visible from central China on a polar (equidistant) projection. The circle of constant visibility (declination +56°), celestial equator, ecliptic (incorrectly represented as a circle), boundaries of the twenty-eight lunar lodges, and outline of the Milky Way are all shown. Xiu boundaries are denoted by radial lines extending outward from the circle of constant visibility to the edge of the chart, which represents the circle of constant invisibility (declination - 5r). Stars are indicated by small dots, joined into groups by straight lines. A few very bright stars such as Sirius and Canopus are represented by fairly large dots, but no systematic attempt is made to distinguish between stars of different brightness or to divide asterisms into the three ancient sets. Each constellation is named, as are the individual constituents of several important groups. Around the edge of the chart are marked the names and widths of the twenty-eight lunar lodges in du (inner circle) and the names of the twelve Jupiter stations, the twelve "terrestrial branches" (zhi)-as direction indicators-and other details (outer circle)”. (F. Richard Stephenson, “Chinese and Korean star maps and catalogs” in J.B. Harley and David Woodward, eds, The History of Cartography (Chicago: University of Chicago Press, 1994), 2:546)

The text of the planisphere states that 1565 named stars are known, but only 1440 of them are actually shown. The representations of the planets have an astrological rather than an astronomical purpose, the text further reading: