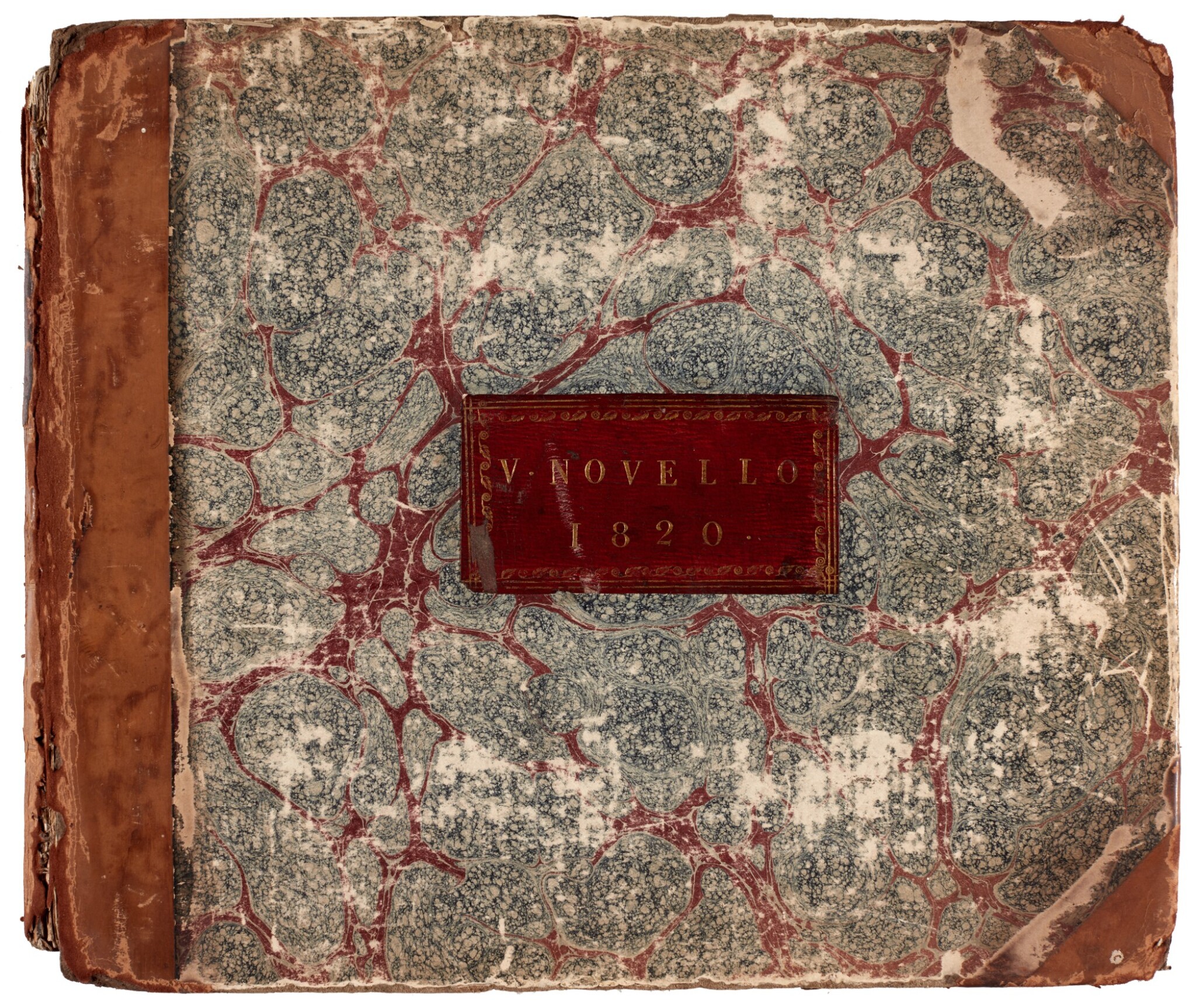 Autograph manuscript volume of Novello's vocal-score arrangements of nine masses by, and attributed to, Mozart, including three spurious works

THE STICHVORLAGE FOR NOVELLO'S FAMOUS EDITIONS OF THE MASSES, the volume containing vocal scores of six genuine Mozart masses, K.317 in C, K.257 in C, K.192 (186f) in F, K.258 in C, K.220 (196b) in C, K.194 (186h) in D, comprising the voice parts and Novello's arrangement for organ of Mozart's original instrumental parts, and full scores with written-out organ parts for three spurious works, K.Anh.233-235 (K.6 Anh.C1.06 in B flat, C1.08 in C, and C1.09 in G), the organ parts provided with indications of registration, the viola part in mass no.9 being added by Novello himself ("...to complete the I[nstru]mental accompt"), notated in dark brown ink on either two six-stave systems or a single 11- or 15-stave system per page, with an autograph series title on the first page ("Mozart's Masses, With an Accompaniment for the Organ Arranged from the Full Score by Vincent Novello"), individual titles and superscriptions at the head of the masses ("Mozart's Mass in C, N.o 1. The organ accompaniment by V. Novello...Mozart[']s Mass in G, No 9...The organ accompaniment by V. Novello") and an autograph title-page for the seventh mass ("Mozart's Mass in B [flat]. For Four Voices and Instrumental Accompaniment, With a separate part for the Organ Arranged from the Full Score by V: Novello. 1819"), marked up by and for the printer in pencil ("This Mass...will require 32 Plates - let the first Plate be marked Page 2..."), with some lengthy explanatory notes by Novello ("...[on p.[23] of the last mass:] In the Copy whence this was taken, the same time is continued throughout the Credo; but the Editor has ventured to suggest a little alteration of time here & at the "Et resurrexit", as giving more variety of effect, & being more consistent with the sentiment conveyed by the words") and a number of erasures and corrections

over 380 unnumbered pages, plus blanks, oblong 4to (c.23.5 x 30cm), various 12-stave and 16-stave papers, manuscript index in Novello's hand on the front pastedown, some later pencil annotations (after 1862), red morocco label gilt to upper cover ("V. Novello 1820"), original half calf, [London, by 1819], lacking conclusion to the 'Dona nobis pacem' of mass no.9 (the manuscript breaks off after b.8) and lower cover, browning to general title and edges throughout, some fraying to edges, upper cover detached

AN IMPORTANT MANUSCRIPT IN THE HISTORY OF NINETEENTH-CENTURY MOZART RECEPTION AND IN THE DEVELOPMENT OF THE CHORAL VOCAL SCORE.

Altogether 17 masses supposedly by Mozart were edited by the great nineteenth-century organist, publisher and composer Vincent Novello (1781-1861) in vocal score with accompaniments arranged by himself for organ or piano, editions which historically were of great importance for the reception of Mozart's music in England in the early part the nineteenth century. Nos.1-15 were published for Novello by W. Galloway between 1819 and 1820; nos.16-18 (nos.13 and 16 comprise two parts of a single mass) were published by Novello himself in 1824 (the masses were also published with separate vocal and instrumental parts). Before this time, these works had only been available, if at all, in full score editions. Novello, who regularly performed the masses of Mozart and Haydn at the Portuguese Embassy chapel in South Street, Grosvenor Square, had himself become acquainted with these works through access to the musical library of his friend the Rev. C.I. Latrobe (masses nos.4, 5 and 6 in the volume are in fact annotated by Novello as being from "a M.S. Copy (in Score) in the possession of the Revd. J.C. Latrobe"). It is probable that it was Latrobe who inspired Novello to publish the masses and who suggested that he include fully written-out keyboard accompaniments rather than the hitherto more usual figured bass, thus widening the potential market for the scores.

Three of the masses arranged here by Novello have long been considered spurious works, including no.7 in B flat, K.Anh.233 (K.6 Anh.C1.06), which Constanze Mozart believed to be by Mozart's amanuensis Franz Süssmayr, and no. 8 in C, K.Anh.234 (K.6 Anh.C1.08), possibly by Franz Gleißner, Johann Anton André's assistant in Munich. One mass in Novello's series (not in the present volume) has gained celebrity as one of the most famous of all spurious works by Mozart, the so-called 'Twelfth Mass' (after its numbering by Novello), in G, K.Anh.232 (K.6 Anh.C1.04), which attained enormous popularity in the nineteenth century.

The manuscript itself is very carefully, densely and beautifully written by Novello, a testament to a highly skilful and monumental labour of love. Indeed, for devoted Mozartians, Vincent Novello will always be reckoned among the angels, his services to Mozart going far beyond his pioneering publishing efforts. Some nine years after the present volume was bound, Novello organized a subscription for the benefit of Mozart's ailing sister Nannerl, and journeyed to Salzburg with his wife Mary to present her with the money raised. His travel notes and diaries were published in 1955 as A Mozart Pilgrimage, and contain much invaluable biographical material arising from his meetings with Nannerl and Mozart's widow Constanze.