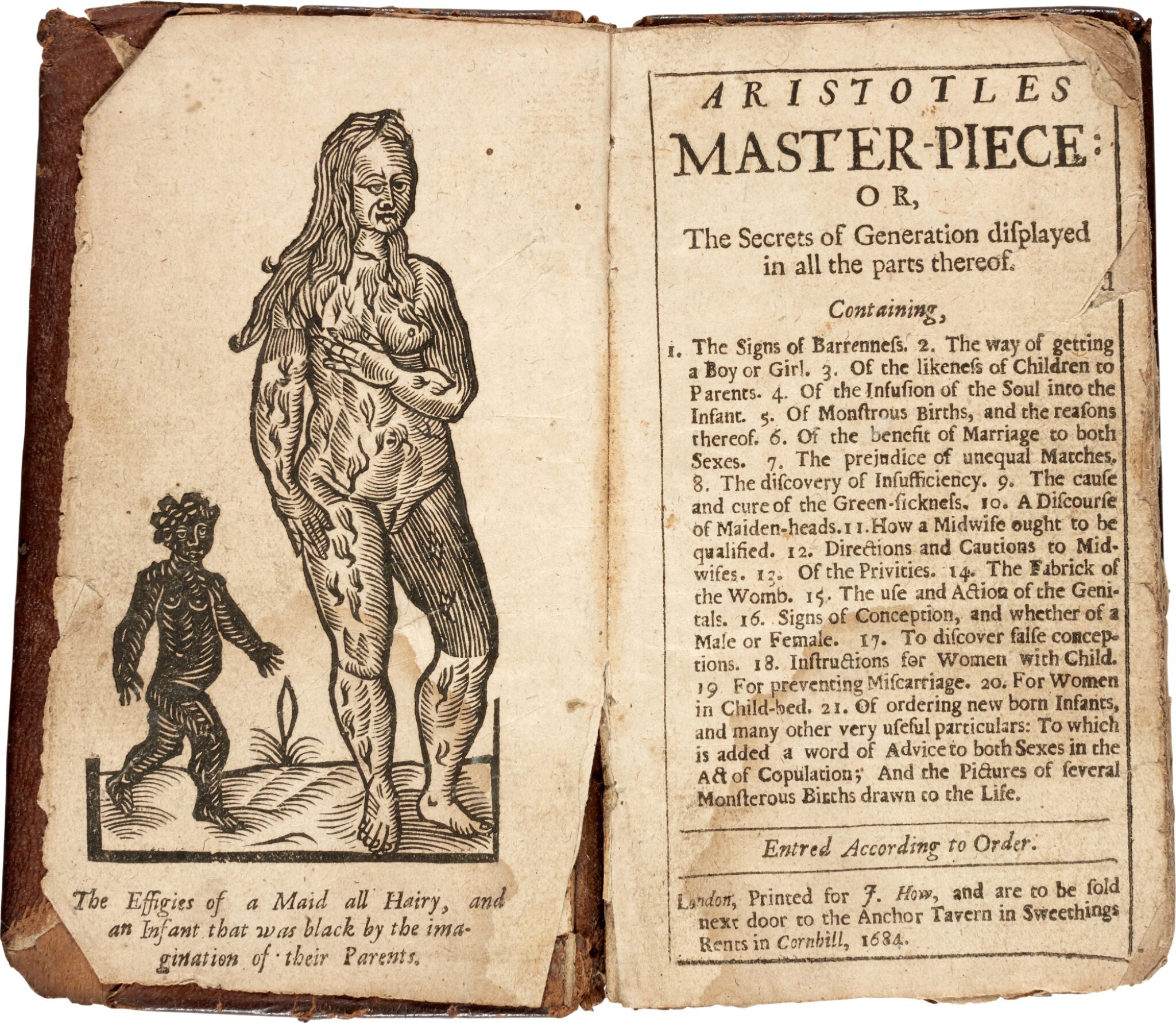 Aristotles master-piece: or, the secrets of generation displayed in all the parts thereof... London: for J. How, 1684

12mo (144 x 83mm.), woodcut frontispiece of a hairy woman and a black baby, with blank leaf H12 (torn), woodcut illustrations, contemporary calf over thin wooden boards, small hole at foot of A5, A8 defective at upper corner with loss of text, I3 torn at head with slight loss, some fraying throughout (sometimes affecting text and images), occasional staining, occasional shaving of text in margins, binding slightly worn

A popular (and somewhat notorious) handbook of conception, pregnancy and childbirth, first printed in 1684 and regularly reprinted; there are at least three issues recorded with a 1684 How imprint and this copy does not exactly match any of those. The text has no connection with Aristotle, but is mostly drawn from Levinus Lemnius, Sweet miracles of nature (1658) and the anonymous Complete midwives practice enlarged (1656).

The woodcut illustrations depict "monstrous" births and were probably more designed as a marketing tool than to complement the text. The image in the frontispiece (reproduced as one of the illustrations at the end), of a hairy woman and a black baby, supposedly created through the mother's imagination while pregnant, is somewhat at odds with the stated intent of the book to provide practical information about childbirth. The image is based on a woodcut from an English edition of Ambroise Paré's work Des monstres et prodiges, and one of the other woodcuts of monstrous births contains Paré's ("Parrey") description of a child with deformed and stunted limbs. The other woodcuts show a baby with the features of a calf born in Germany, a half-man half-dog described by Raffaele Maffei, a winged monster born in Ravenna, and a child in Germany with four arms and four legs.

"Thus Reader I have finished the difficult Mystery of Generation, as I hope to the satisfaction of all Modest and Ingenious Persons." (p.190).

a reset version of Wing A3697fA (which has the title "Aristoteles", not "Aristotles" as here); Mary E. Fissell, "Hairy women and naked truths: gender and the politics of knowledge in Aristotle's Masterpiece", William and Mary Quarterly, 3rd series, volume LX (2003), 43-74