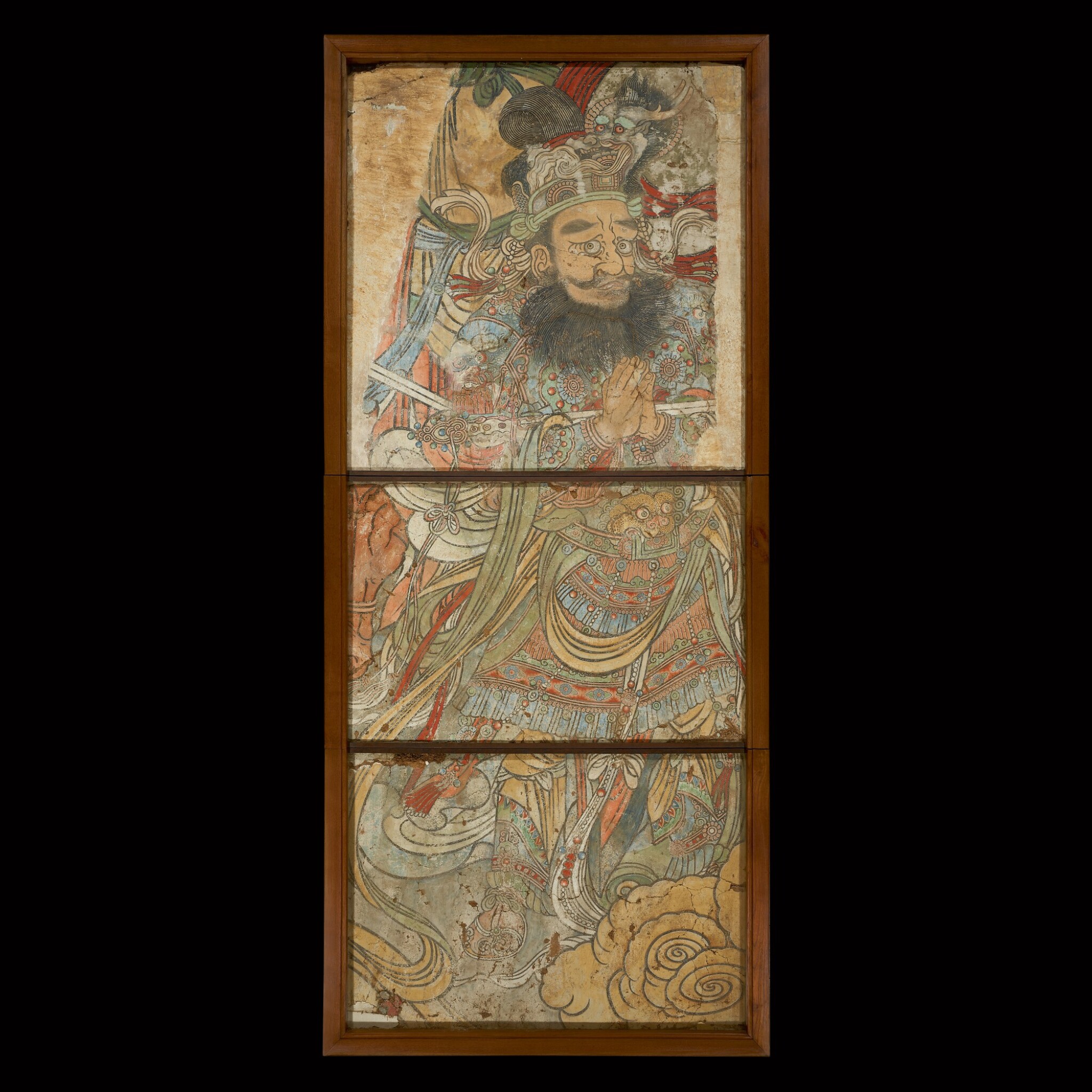 A monumental fragmentary fresco of a guardian king

comprising three sections and superbly depicting a bold muscular figure, possibly Dharmapala, standing firmly upon a swirling cloud and dressed in elaborate armoured robes and scarves fluttering in a celestial wind, secured with a lion-mask belt on the belly below the prayerfully clasped hands that are also supporting a long sword, the figure portrayed with eyes directly and powerfully confronting the viewer, framed by a large flared beard and a headdress suspending flaying strands of pearls and tassels below a crest with a writhing dragon, wood frame and stand

The fresco is preserved in considerably exceptional condition with extensive original pigments remaining. Typical of large frescos of this type, as visible in the catalogue photo, there are stabilised cracks, and retouching to areas of flaked pigments to this fragile three-part fresco, the latter of which have been undertaken from as early as when it was still in situ.

Collection of the Yurinkan Museum, Kyoto, from at least before World War II until the 1990s.

The bold and expressive painting manner, with sweeping dark outlines as well as details such as the fluffy clouds at the base, is characteristic of temple paintings from the Yuan dynasty, particularly from Shanxi province. Compare the frescoes from the Yongle Gong, a Daoist temple complex at Ruicheng, illustrated in The Yongle Palace Murals, Beijing, 1985, and again in Zhongguo meishu quanji: Huihua bian [Complete series on Chinese art: Painting], Beijing, 1988, vol. 13, pls 88-107; as well as other comparable murals from the Qinglong Si, a Buddhist Temple at Jishan, ibid., pls. 119-24.

Probably removed in the 1900s from lost massive temples in Shanxi and Henan, such frescoes form centrepieces in major museums such as the Metropolitan Museum of Art, New York, the Nelson-Atkins Museum, Kansas-City, and the Musée Guimet, Paris. Their potential to awe and inspire on a grand scale remains evident. The present fragment depicts a dragon-king, or lokapala, one of the Four Heavenly Kings standing guard over the cardinal directions, symbolising the universal authority to the Buddhist law, or dharma, which radiates in every direction. At over 270 cm high, this ancillary section would have formed part of an enormous mural cycle that would dwarf Western equivalents such as the Sistine Chapel, and it leaves the viewer in wonder at the achievements in Chinese architecture and religious painting that is lost to us today. In comparison, a monumental section (713.74 x 1483.36 cm), of Tejaprabha Buddha accompanied by deities representing the Sun, Moon, Planets, Heavenly Kings and other attendants, executed about 1300 for the Guangsheng Temple, in Zhaocheng xian, Shanxi province, is now in the Nelson-Atkins Museum of Art, Kansas City (no. 32-91/1

[https://art.nelson-atkins.org/objects/14590/the-assembly-of-tejaprabha]), illustrated The Nelson-Atkins Museum of Art. A Handbook to the Collections. Kansas City, 1993, col. pl. 64.

The present wall painting is particularly notable for its use of colour and vivid swirling line. Compare a mural section in Cave 3, Mogao Grottoes, Dunhuang, executed during the Yuan dynasty immediately after the Mongol conquest of the Tibetan kingdom which controlled Dunhuang, illustrated Whitefield et.al., Cave Temples of Mogao. Art and History on the Silk Road, Los Angeles, 2000, p. 90, in which a monumental figure of Ekadasamukha Avalokitesvara, in his 'One-Thousand Armed' manifestation, appears in a muted and controlled colour palette but with shimmering lines and virtuoso variation of compositional density. This draws on the extremely sinuous lines and delicate craftsmanship of Song dynasty murals, a rare group was exhibited by C.T. Loo in 1946, including three now in the Nelson-Atkins Museum of Art, Kansas City, op.cit., pp.313, executed in the mid 10th century for the Zisheng Temple, Wen xian, Henan province.

The depiction of the lokapala figure is also outstanding in its expressiveness, both in religious fervour and emotional complexity. Guardian figures, lokapala, and 'thunderbolt-bearers', vajrapani, were traditionally depicted in postures of strength and rage, with strained tendons and muscles, and grotesque or exaggerated features, to characterize their ferocity and prowess in protecting the Buddhist faith. The present figure confronts the viewer directly with his bulging eyes, yet bears an inscrutable expression, hinting at compassionate concern, inner conflict, dignity, and an awareness of the burdens of duty and decisive action. His emblem, a sword, identifies him as Virudhaka, Guardian King of the South. His compatriots are Vaisravana, Guardian King of the North, bearing a stupa and halberd; Dhrtarastra, Guardian King of the East, bearing a lute; and Virupaksa, Guardian King of the West, bearing a snake and a jewel. It is interesting to compare the marble reliefs of the Guardians of the North and East, executed in 1342-45 on the monumental Cloud Terrace of the Juyong Guan Gate, Beijing, illustrated in Sherman E Lee and Wai-kam Ho, Chinese Art under the Mongols. The Yuan Dynasty (1279-1368), Cleveland, 1968, pp. 7-8, figs 1-2, who bear extremely similar armour and decorated sleeve-guards.

Compare the slightly later Ming dynasty development in pictorial line and composition, from a large section of three bodhisattvas, executed in the 15th century for the Chingliang Si, 'Temple of Pure Coolness', in Xingdiang xian, Hebei province, now preserved in the British Museum, London, and illustrated in Wladimir Zwalf, Buddhism. Art and Faith, New York, 1985, no. 327.