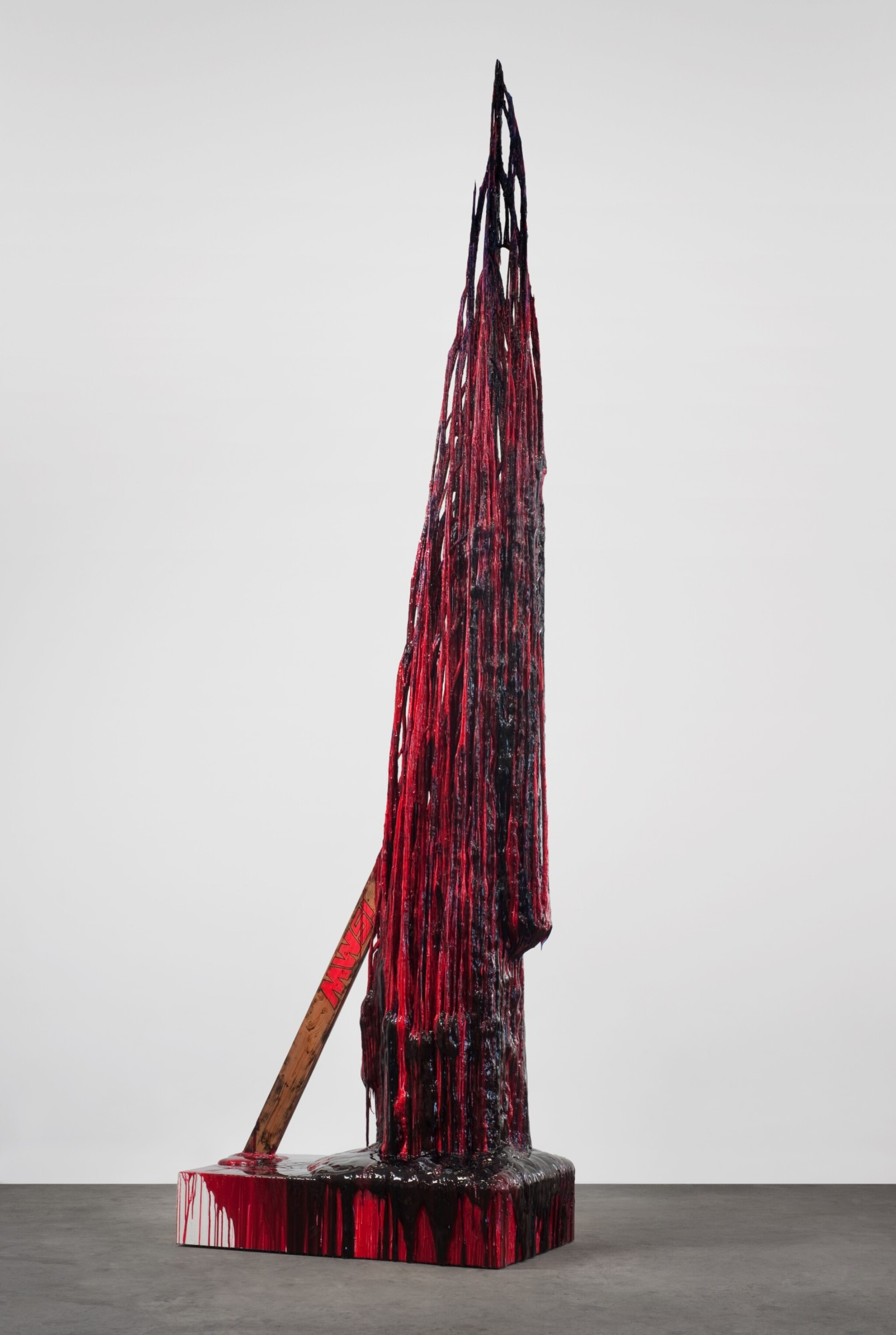 This work is in excellent condition. There are two minor scuff marks on the base. There is a chip in the urethane drips underneath the base, probably due to handling in the studio.

Berlin, Sprüth Magers, Sterling Ruby: I AM NOT FREE BECAUSE I CAN BE EXPLODED ANYTIME, April – May 2011

The simple shape of the free-standing column, rooted to the ground and rising to the sky, has fascinated mankind since the first time they piled up stones discovering a relationship to the human scale. Over the centuries, the vertical form has been filled with symbolic meaning. The vertical stands for spiritual elevation, for transcendence, for the connection to the cosmic.

This poured urethane sculpture executed in 2011 with its messy aesthetic and dripping paint, represents an iconoclastic object that possesses a manmade quality and equally a natural disposition. The analogy between sculpture and the natural form of a stalagmite, the upward-growing mound of mineral deposits that have precipitated from water dripping onto the floor of a cave, to the artistic practice of pouring urethane, which is a type of plastic that can be poured as a liquid but hardens quickly into a solid, is striking. The artist’s particular interest in a moment “when malleability becomes frozen” drove Ruby’s interest in the medium of urethane: “I wasn’t casting urethane, I was pouring it, usually in a two-part compound. You have five to ten minutes to pour it before it becomes a solid. So, it was much like ceramics, except you can do urethane on a more monumental scale.” (the artist in Sterling Ruby: Monument Material by Jim Duncan, Sculpture Magazine online, 8 February 2019) It takes at least several months to complete these works because Ruby pours small amounts of liquid urethane over an armature in thin layers. The glossy coats of colour are applied as a last step and appear wet, as if they are still in formation.

Including his stalagmite figures into his best-known project “Supermax” addressing suppression whilst using incarceration as an allegory, makes the spectators think immediately of the natural place where stalagmites grow - dark, damp caves in which the exits appear difficult to be found. The bright red leaves the viewer with an unavoidable association to blood, which the artist however left uncommented. To free the stele form from any phallic associations Ruby gives his stalagmites a wooden support to the side which he also uses to title the works.

Since 2008, when Ruby had his first major exhibition at the Museum of Contemporary Art in Los Angeles (MOCA), his works have now become part of the permanent international private and museum collections, the Tate Modern in London, Musée d’Art Moderne de la Ville de Paris, Solomon R. Guggenheim in New York and the Whitney Museum of American Art in New York, to name a few.