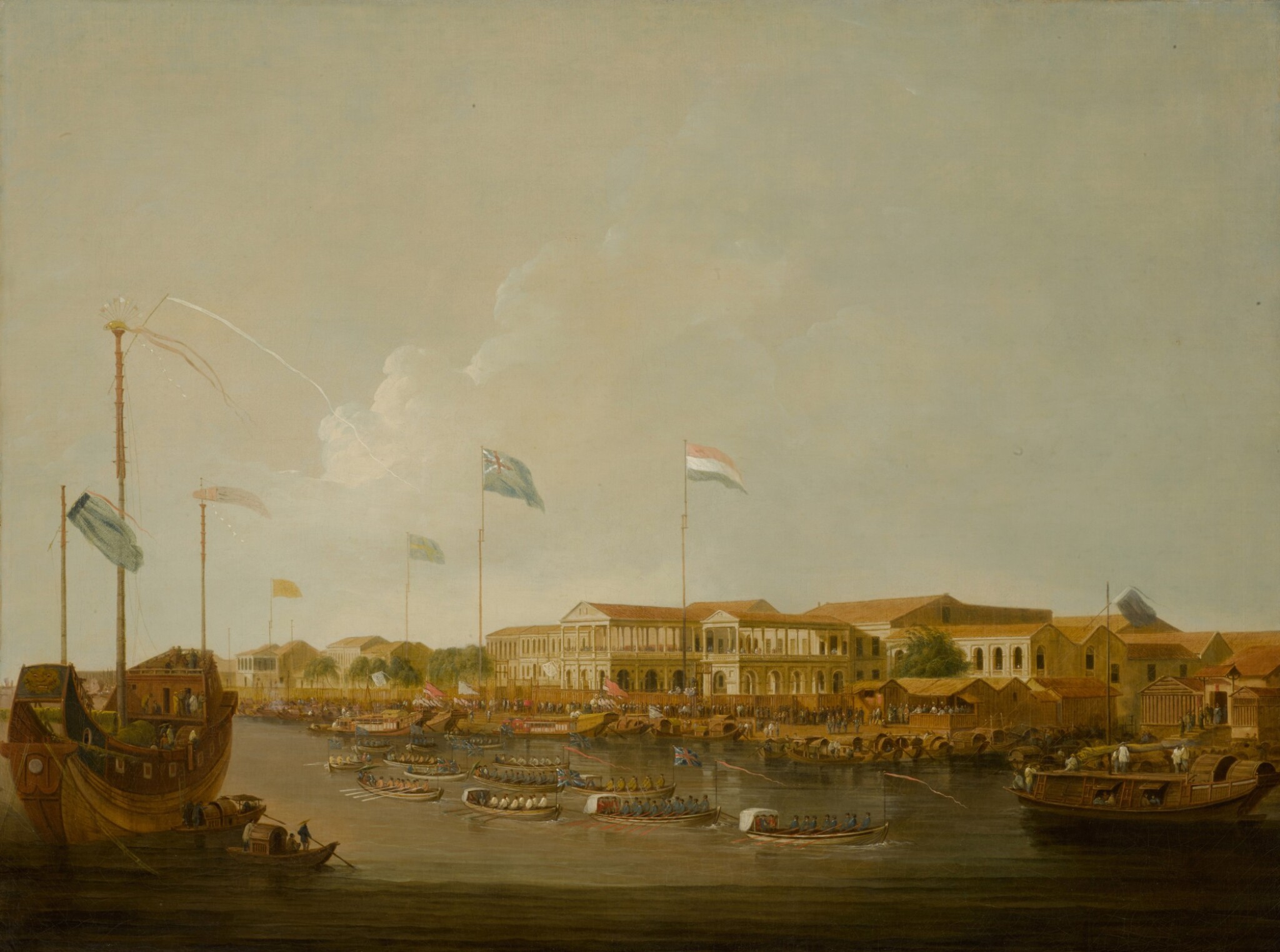 This work does not appear to have been recently restored. The canvas has an old glue lining which is stabilizing the paint layer. Diagonal stretcher marks are slightly visible in all four corners despite the lining. The varnish is attractive, but it has yellowed over time.

The flags and flag poles have become slightly abraded and have received retouching. There is also some thinness within the darker colors of the foreground, but there does not seem to be any retouching here. Small, isolated spots of retouching are visible under ultraviolet light in the sky, with slightly broader retouches to some thinness on the right side. The retouches are well matched.

The work can be hung in its current condition.

By descent to his second wife, Anna Maria Hastings, the former Garoness Imhoff;

By descent to her son General Sir Charles Imhof;

Harman Grisewood (who purchased Daylesford in 1853);

Bequeathed to the Kingham Hill Educational Trust in 1928, and acquired from Daylesford by the Trust in 1936;

There acquired by the present collector.

Thomas Daniell and his nephew William found themselves in China on two occasions: once while traveling to India in 1785 and again when returning to England in 1793. On their first trip, they boarded the Indiaman ‘Atlas’ from Calcutta to Whampoa where they remained for several months visiting Macao and Canton, places that would later become a source of inspiration for future oil paintings. During their return, Thomas and William spent several months in Canton and then returned to England the following year with the convoy of Lord Macartney.

Works such as the present lot, featuring well recognized Chinese harbor views, were produced by both Thomas and William in the years following their original visit. This canvas is the larger of Daniell’s two views of Canton. The smaller picture (sold London, Christie’s, 16 November 1999, lot 266) shows the European factories from the south-west. Views of Canton by William Daniell are in the Hong Kong Museum of Art; Yale Centre for British Art, Paul Mellon collection; Victoria Memorial, Calcutta; and in a private collection. Both Thomas and William also produced similarly composed views of Whampoa (see for example, New York, Sotheby’s, 24 January 2002, lot 38). These important pictorial records are the earliest of their type by a western artist, preceded only by John Webber's drawings, executed on Cook's third voyage (1779-80).

Trade between China and the West had proliferated for centuries by the time Daniell painted this picture, either through the Silk Road or maritime routes. With the closure of the silk routes across Persia to Asia by the Turks in the 14th and 15th centuries, Europeans looked for new ways to access the Far East and its highly coveted silk, tea, porcelains and luxury goods. The Portuguese were the first to achieve this at sea with Vasco da Gama, and the Spanish, Dutch and English quickly followed. By the end of the 18th century, England, Holland, France, Denmark, Sweden, Austria, Spain and America all had an established presence in Canton, the only trading port open to foreigners as ordained by the Chinese court until the First Opium War. Images of this bustle of trade and commerce come down to us today in the form of China Trade Paintings, commissioned by merchants to take home as souvenirs. Interestingly many, if not all of the trading ports significant during this period remain highly important hubs of commerce today. Conveniently situated at the mouth of the Pearl River, Canton was the largest of all treaty ports and economically the most important city in Southern China. The city overlooked Honam Island where Western traders were occasionally entertained by wealthy Chinese merchants.