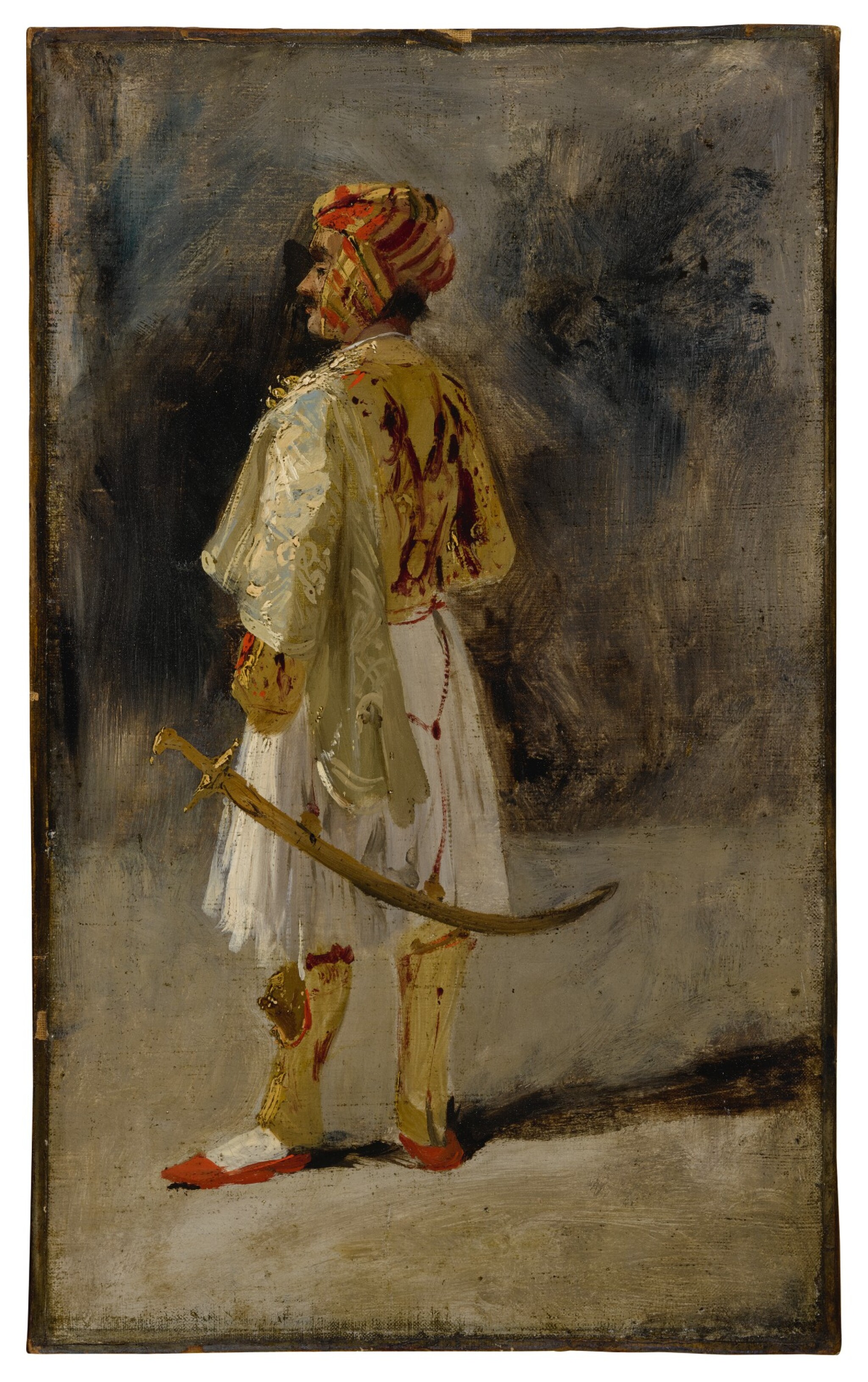 Demetrius de Palatiano (1794–1849), a member of a prominent family from Corfu, was according to the family tradition an enfant terrible. He is described in family records as unstable and flighty, said to have narrowly escaped being beheaded while in the service of the tyrant Ali Pasha, the local Ottoman ruler.

He travelled widely throughout Europe, in Albania, the Ionian islands, Italy, Germany and England. Always the grand seigneur, he claimed in a letter to his sister that Maximilian, King of Bavaria, with whom he is said to have been on friendly terms, invested him with the title of Count. Though research in the Commonwealth and Bavaria archives have not been able to confirm this, Demetrius used the title freely in official documents, styling himself as the ‘Honourable Count Demetrius de Palatiano’. In late 1825, on his way to Corfu from England, he passed through Paris, where he posed for Delacroix’s Portrait de M. le Compte P. en costume de souliote. Exhibited at he 1827 Salon, the portrait is now only known through a copy in the Cleveland Museum of Art, yet numerous other studies of the Count by Delacroix and other artists have survived, including the present work.

In the winter of 1825-1816, Bonington worked in Delacroix’s studio and, influenced by the French Romantic painter, he turned to genre and history painting. They worked closely together, manifesting a strong colouristic emphasis, sharing models and compositions. Dr. Pointon notes that ‘the most complete evidence of common subject matter and a very similar approach is to be found in the sketches that Delacroix and Bonington made for their portraits of Count Demetrius Palatiano in the costume of a Palikar’.

Demetius is portrayed wearing the uniform of a Suliot, consisting of a long, white skirt, or "foustanella", gold-worked cloak, crimson velvet gold laced jacket and a waist-coat, silver mounted pistols and daggers. The Suliots were Greek/Albanian Christians who had fled from the repression of Ali Pasha when he became governor of Jannina in 1822, and who later fought courageously during the Greek War of Independence. The Greek War of Independence was a source of great interest for the rest of Europe and the exotic costumes of Greek soldiers, also known as Suliots or Palikari, became a popular subject matter amongst artists. If from a pictorial point of view, it may have been the costume that most attracted Delacroix and Bonington to Count de Palatiano, his colorful and extravagant personality must have also had a strong appeal at a period when the memory of Byron deeply influenced French Romantic Art. Byron posed in the habit of a Palikar for his famous portrait by Thomas Philips and recruited a number of them to form his private guard prior to his arrival in Missolonghi in 1824. Portrayed as fearsome and independent in Childe Harold’s Pilgrimage, Romantic artists saw Suliots as modern primitives, embodiments of natural purity unspoiled by civilization. In the present work, Palatiano stands with his back to the viewer. The bright golden hues of his dress, painted with spontaneous lose brushstrokes, stand in strong contrast against the muted background, accentuating the Count’s flamboyant and distinctly Byronic cast. Delacroix put his finger on the special quality of such works when he later wrote to the critic Théophile Thoré, ‘I could never cease to admire his marvelous grasp of effects and the facility of his execution […].’ (translation of letter to Théophile Thoré, 30 November 1861, Correspondence générale d’Eugène Delacroix, IV, ed. André Joubin, Paris, 1935-38, p. 286).