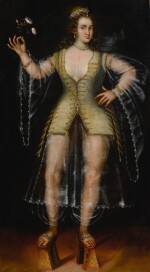 This painting appears to be unlined, but has been strip-lined at the edges to fit onto a modern stretcher which is about 5 inches wide on each side. The canvas has been coated on the reverse with a tinted varnish or pigment and it has as a result buckled at the upper part of the canvas, which thus makes the stretcher perceptible at the at the top of the composition. The painting was originally of shaped format, and made into a rectangular composition at a later date. There are additions in the upper and lower corners, which are mostly restricted to the backgrounds and covered on the reverse by the stretcher, but are very faintly visible to the naked eye and under uv. At top, these are above the flowers at left and similarly at right. The bottom additions are stepped and rounded at the bottom, just to the left edge of her chopine lower left, and to the right of the other at right. These additions are not uncommon with paintings that were originally set into framing elements in interiors, and this may have been the original situation with this picture. At any rate, it is quite well done, and indeed the painting presents itself pretty well, with good retention of detail throughout. There are a few very small restored holes or punctures in the canvas which have been addressed with small patches, two to the right of the sitter's head, and another small one between her feet. Under UV: there are a few scattered restorations here and there, but for the most part the figure is quite good. There are areas of restorations along the joins where the aforementioned additions have been made. With a small amount of attention, the painting could be improved; the overall surface is slightly dry and a fresh varnish would help the strength of the image. The painting should also be re-stretched to create a planar surface. The paint layer itself is good overall, with good detail in the figure and in her costume, and it makes an arresting image.

This striking portrait shows an Ottoman woman, one of a number of imagined portraits of sultanas that began to appear in the mid-16th century, showing women of the harem as individual figures of interest and importance, although from a somewhat idealized Western perspective. During the 15th and 16th centuries, the Venetian Republic and the Ottoman Empire were at the height of their powers – their combined wealth, geographical reach and ambition meant the two frequently came into conflict as they competed for control of the Mediterranean, culminating in the Battle of Lepanto in 1571. Despite this rivalry, however, they enjoyed a profitable and mutually beneficial trading relationship, which encouraged deep diplomatic and cultural ties. This led to the depiction of Ottoman figures and customs in the visual imagery of Venice at the time, when the city was one of the key artistic centers in Europe.

A key feature of such portraits is the intense interest in dress. Here, the shoes the sitter wears seem to be a special type of wooden clog, known as Nalin. The high heels served to protect wearers' feet from the water of the floors in the bathing houses. The base was carved from wood, and the strap from fabric or leather, with the shoes decorated, as here, with a variety of precious materials, such as gemstones, gold and mother-of-pearl. In addition to their practicality, they became items of craftsmanship that carried symbolic meaning in Ottoman society. The design and manufacture of Nalin became an opportunity to display social status – the different heights of the shoes, for example, were indicative of the wearer’s social status This type of footwear could be found in prints of the late 16th century, such as Jean Jacques Boissard’s compendium of international dress, Habitus variarum orbis gentium, published in 1581. The shoe is closely related to the chopine that was worn in Venice during the 16th century, which served similarly to protect the wearer’s feet from the wet streets of the city, and likewise became a symbol of luxury and nobility.