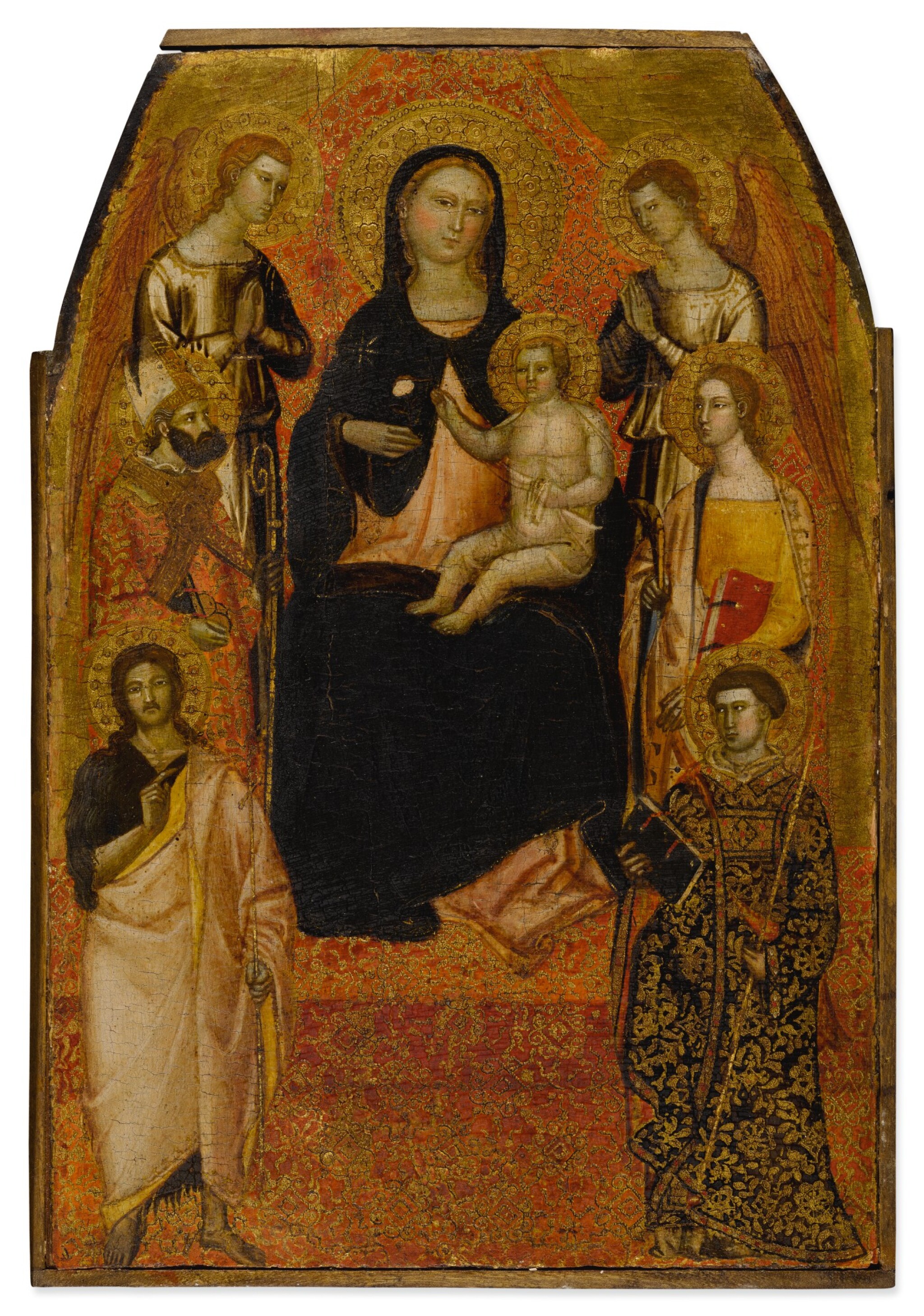 The following condition report has been provided by Karen Thomas of Pietro Edwards Society of Art Conservation, 336 West 37th Street, Suite 1580, New York, NY 10018, 212-457-8956, mh@edwards-society.com, an independent restorer who is not an employee of Sotheby's.

Across much of the picture the paint layers are in fairly good condition but do not appear to their best advantage. An aged, discolored and dirty varnish suppresses the colors and creates a dry, uneven surface due to areas of reticulation and wide-aperture drying cracks within the varnish. A network of dark craquelure in the paint is particularly noticeable in the lighter passages and, along with the dirt and discolored varnish, diminishes the appearance of nicely-preserved facial features and other small details. Darkening of the pigment, a common phenomenon, is visible in the blue mantle, as is a network of strong craquelure. Some restoration toning appears to have been applied in the shadows of the composition to improve legibility and contrast, and details in the angel's wings have been retouched. The color of the paint used for the painted decorations in the gilded garments of the bottom right saint appears to have altered over time.

The vertically grained wood panel has a marked lateral convex warp, and the frame (not original to the painting) has been carved to match the curvature of the panel. An old grain-oriented crack left of center, running two-thirds of the height of the panel appears stable.

Cleaning can be expected to improve the tonality and brightness, and a new restoration could lessen the visual impact of the craquelure and thereby improve the legibility of the small details throughout the figures.

The author of this tender Madonna and Child scene is so named after a predella depicting the Birth of the Virgin in the Ashmolean Museum, Oxford.1 Datable to circa 1385-1390, it can be considered a late work of this Florentine painter, comparable with a similarly rendered panel in the Chigi-Saraceni collection, Siena.

Though little is known of this elusive artist’s life, he trained in Orcagna's workshop in the 1360s and continued his work there following his master’s death in 1368, when the workshop passed to Orcagna's younger brother, Jacopo di Cione.2 He is known to have assisted Orcagna from 1367-1368 with the Saint Matthew triptych, today in the Uffizi Gallery in Florence,3 and he has also been identified as the collaborator in Jacopo’s elaborate, large scale Crucifixion altarpiece of 1369-1370, today in the National Gallery in London.4 With the influence of his two teachers as his foundation, this master developed his own individualized style that is most clearly visible later in his career.